Mariners decide losing is fun, do it again

The Mariners extend their losing streak to six with Sunday's 3-2 loss to the Marlins.

Share All sharing options for: Mariners decide losing is fun, do it again

You know where I don't want to be right now? In the Mariners clubhouse. I don't want to even be in the same building that contains that room. I mean, in a way, it would be cool. Meeting Robinson Cano? Crazy. Asking Mike Zunino and Kyle Seager some baseball questions in person? Great. No. Wrong. Not great. Can you imagine what is going on in that room right now? The amount of 'Fucks' and 'Horseshits' and whatever else is in LLoyd's vocabulary that we can only pretend to have working knowledge of? Towels blanketed over heads hanging in tired hands, silent stares untying shoes and averting the eye contact burning holes like a laser pointer of guilt assignment. Brandon Maurer yet again feeling like a sack of shit even though he had a no hitter into the fifth.

Man, it has to be awful in there right now. Me? I'm sitting on my couch with a stomach full of brunch and coffee, now watching TV in my slippers and relaxing with my dogs. I'm frustrated the Mariners lost, in fact, I'm getting downright sick of all of this. Finding new words to describe every new loss this week has been a task, but once I do, I get to shut my computer and go on with my life. Instead, Brad Miller is currently boarding a plane back to Seattle, remembering his Cactus-league leading performance like it was a lifetime ago--pushed out of his mind with every new strikeout and bobbled ball. Tom Wilhelmsen is wondering how he can return to his dominant 2012 instead of throwing to a five-foot wide strike zone. Six games, six days, six losses. The Mariners are 7-11, and it sucks.

I'm not even going to bother pointing out the little caveats that we've been resting on lately. They are true--that BABIP will come around someday, Iwakuma might be a week away, there are a lot of baseball games left, Robinson Cano is this and that, etc. Look--it's true that the little unquantifiable parts of the game that old school writers like to talk about are kind of stupid. They lead to awful things like ESPN writers claiming that clubhouse chemistry can be measured by the racial makeup of a team, or to less harmful (but still stupid) things like benching Bryce Harper for being a responsible athlete. But you kind of have to wonder what's going on with this team, and if it is going to start to have adverse effects going forward.

But yes, today. What bums me out is that Brandon Maurer pitched today only because the Mariners rotation is paper thin, and then he pitched well. Very well--he only had a walk through an out into the fifth. In fact, the first half of this game was ridiculously refreshing after what the past week has looked like. In the tops of innings, the Mariners were getting to Kevin Slowey--Corey Hart hit a double to lead off the second, was sent to third by an Ackley grounder, and scored on a towering fly ball from Justin Smoak that fooled Dave Sims into his first confused dinger call of the year as it died at the track. And in the bottoms of innings, Maurer was handling the Marlins.

The second run came in the fourth, as Cano lined a double into left field, moved to third on a Corey Hart sac that shouldn't have been caught by Stanton, and was then plated with a shallow flyout from Dustin Ackley. This was the whole game until the fifth--0's on the board and a good changeup from Maurer, with a few created runs from a Mariners offense that has been covered in an oil blanket as of late.

We should absolutely be excited about Maurer today. His four-seamer averaged 94, and Brooks says one touched 98. His changeup came out of nowhere, and he threw 11 of 13 as strikes. He's still far from perfect, or possibly even servicable, but he looks like a different pitcher than he did last year. Here's a fourth inning strikeout to Christian Yelich: 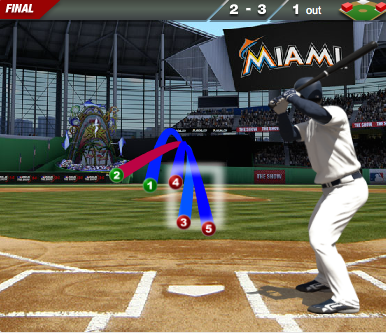 Hitting (some) spots, even with John Buck not getting as many calls as he should've. The problem? Brandon Maurer melts when one little thing goes wrong. That's what he does. It's completely unlikely that he was going to carry a no hitter longer than he did, because even in the bat above you can tell he's not spotting all his pitches. It was working, though, until he got his first hit. Then, a walk to Adeiny Hechavarria: 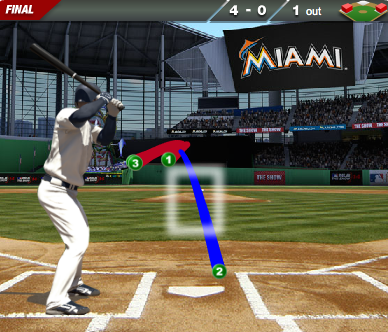 Whoo boy. Dude's getting a little anxious. Next batter--Donovan Solano, who didn't get pitched this way because of his 48 wRC+: 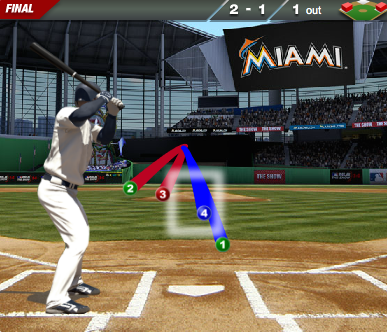 Maurer couldn't locate the edges of the plate. His command followed his brain and nerves out his ear to drip on the dirt of the mound, and he decided he should throw a slider right down the center of the plate because it sure as hell wasn't going to hit the corners. It was probably a mistake, and you could have seen it coming--he had good command, but the cracks were starting to show throughout the previous innings as well. So be excited about Maurer for sure. But also realize that what seems to be his biggest problem--nerves--could still be relevant. I bumped into Shannon Drayer when I was down at spring training, and we had a short conversation about Roenis Elias coming straight up to the bigs from AA. She asked me what I thought of him, and I mumbled something stupid about how he looks like he had something just a little extra despite a slightly unpolished veneer. Before I could even say Maurer's name, she lifted her arm and tapped the side of her head. We were talking about Elias, but the truth was we were talking about Brandon Maurer.

Still, this was only one run. The Mariners still led the game, 2-1, and after Maurer was pulled, Dominic Leone put up a few good throws to get out of trouble. The Mariners put a little bit of a rally together in the seventh with a Justin Smoak single and back-to-back walks to Nick Franklin and John Buck. LLoyd put his National League cap on and finished the game with running substitutions and pinch hitters over the next few innings, and despite a double switch to counteract a Marlins' pitching change with Kyle Seager, the inning was over.

The real damage came in the eighth with a weird and stupid inning that saw another stupid replay after a stupid mess. First, just watch it:

It was a good call, and it lasted way too long because this whole phone-a-friend business is pretty silly. Then the Marlins got another run moments later. Tom Wilhelmsen had trouble with an early walk to Casey McGehee, and according to Divish, LLoyd and Buck were having issue with this first pitch that should have been a strike: 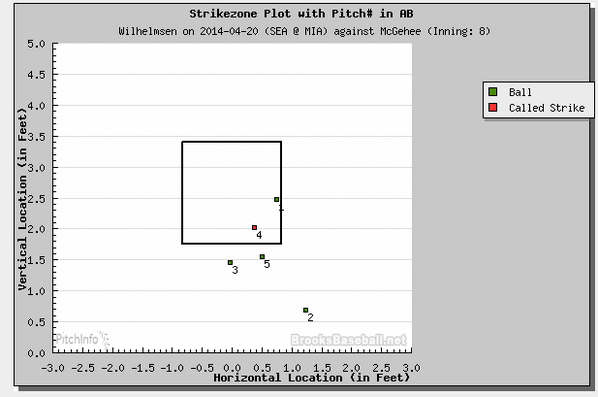 And of course, they are right. But you know what? this pitch gets called a ball about five times in every game, and it's up to your catcher to try and make this call a strike. So if Buck was really mad about this, then well, I don't really know what to say. After his fracas a few nights ago with one of the sloppiest outings behind the plate all year, I'm not blaming the umpire so much for this. Also the other pitches, because come on, Tom.

There was one last rally in the ninth that fell short after a Corey Hart leadoff double. The game ended on a Michael Saunders pinch-hit strikeout and that's that--six game losing streak. As I said before, I don't wish being in that Mariners locker room on anyone. Except maybe the Mariners. Because that's their job. They have to keep going out there and put on goofy matching uniforms and dance around like fools even though they are currently terrible at baseball. Maybe, just maybe, they'll do that enough that they will start being good. But until then, I'm sitting on my couch, waiting.