Briefly mentioned in the linkage yesterday, the Mariners have announced who will be playing where this year, but it's worth further expansion. Here are the rosters, courtesy of the Mariners. 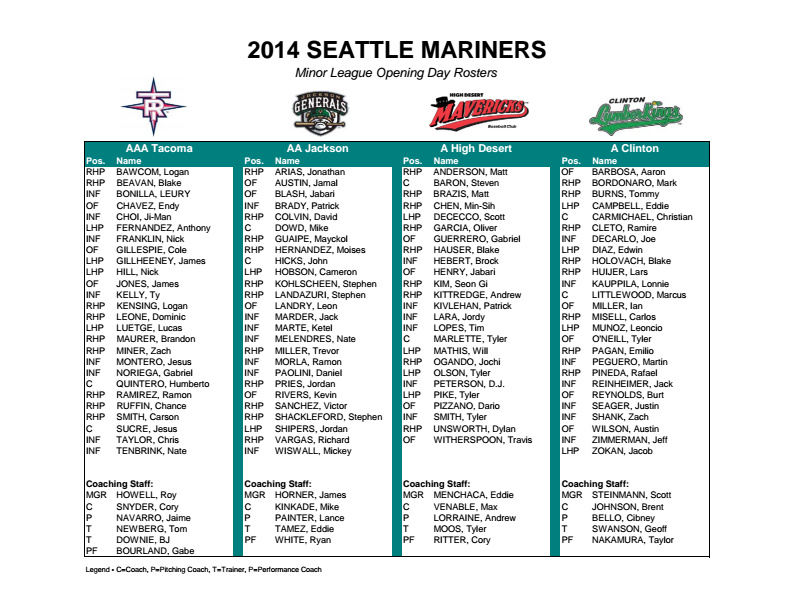 The Rainiers outfield isn't as crowded as it could have been, as Cole Gillespie, James Jones, Endy Chavez will be the primary outfielders, with Nate Tenbrink, Ty Kelly, and perhaps even Nick Franklin filling in the corner spots. There's definitely room for Franklin to get reps outside of the infield.

Speaking of the infield, there's a crowded group. Both Franklin and Chris Taylor are on the roster, where they will be fighting for starts at short. Both may also get starts at second base, but it'll probably be Taylor at this point. There's less concerns about Taylor's ability to play shortstop than Franklin, and the team will continue to showcase Franklin at short in case there's an injury and some team comes scouting/calling. The Franklin/Taylor combo doesn't leave a lot of room for Ty Kelly, who may find himself as a super-utility player along with Nate Tenbrink.

Jesus Montero's days as a catcher are officially over, listed as an infielder. Presumably, he'll be splitting time at 1B/DH with Ji-Man Choi. Jesus Sucre and Humberto Quintero will split time behind the dish. Brandon Bantz, guest of the podcast and unexpected contributor, was released at the end of spring training. Tough business. I hope he latches on somewhere.

The rotation doesn't hold a lot of promise now that Taijuan Walker and James Paxton have graduated, but Brandon Maurer will attempt to right the ship. Blake Beavan, Anthony Fernandez, James Gilheeny, and Chance Ruffin (still around after I said goodbye). Andrew Carraway starts the year on the DL along with Mark Rogers.

Jabari Blash's month-long destruction of the Southern League wasn't enough to earn a promotion out of the gate, but he's knocking on the door with James Jones as the only outfield "prospect" on the Tacoma roster. Leon Landry is back trying to figure out what went south last year, and Mickey Wiswall jumps up to AA. In my Mariners OOTP 14 sim, Wiswall turned into a power hitting monster, not only making the big league club but knocking over 300 homers in his career. In later sims, he didn't develop into anything at all. This is entirely worthless information, but I have my eye on him for completely irrational reasons.

The infield remains similar to last year's roster, but Ketel Marte joins the club and should be the everyday shortstop. Marte saw a good amount of action/vodka jokes this spring, and he's viewed as a good glove man who hasn't hit much.

John Hicks and Mike Dowd are back behind the dish, the latter of who sparked a comeback against the Rangers in a spring training game that I attended and totally stayed until the end to watch. Totally.

The biggest takeaway from the Jackson roster is the inclusion of Victor Sanchez, who will skip High Desert entirely. The organization has done this before with their best arms thanks to the ridiculous hitting environment, including James Paxton and Taijuan Walker. Brandon Maurer didn't, and he posted a 6.37 ERA in 42.1 innings, and the M's sent him to AA right out of the gate the next year, where he got right back on track. High Desert sucks for pitchers, and aside from the hitter-friendly parks and thin air, another reason hitters dominate that level is because the competition sucks. Plenty of teams don't send their top talent to the California League for a reason, and it's yet another reason why you'll see hitters mash.

Felix's brother Moises will be on the roster yet again, now 30 years old. Impressive.

A+ High Desert / A Clinton

While Victor Sanchez got to skip the California League, Tyler Pike didn't. He'll be stuck in in High Desert, which is unfortunate. His stats will probably go through the roof, and there's a good chance it'll be little fault of his. The other half of the newcomer rising prospects, Edwin Diaz begins in Clinton. It's pretty weird that being at a lower level is actually preferable for a pitcher, but it is.

Chris Gwynn: Congrats, you're being promoted this year!

Tyler Pike: NICE, I've got friends on the Jackson squad. Can't wait to get out there

Gwynn: No, you're actually going to High Desert.

Pike: what did I do wrong

Pike: I thought I had a nice year last year and good spring

Pike: thin is in, I didn't mean it

Pike: please don't do this

This is where D.J. Peterson will start his year, and there's hardly anybody blocking his eventual promotion to Jackson. Don't be surprised if Peterson destroys this level and ends up in Jackson by June/July, if not earlier.

After Austin Wilson's hot finish to 2013, I thought he might make the leap, but he hasn't. He moves from Everett to Clinton, and he'll keep working on his revamped swing. He remains one of the more intriguing sleeper prospects in the organization, and the team will actually get a better look at his performance in an environment that isn't inflated in High Desert.

Steven Baron, a sandwich pick in 2009, will return to High Desert yet again. He didn't hit a lick last year in paradise, and this year he'll be joined by Tyler Marlette, who figures to get more playing time than Baron after a good season in Clinton last year. It seems like Baron's baseball career is puttering out.

Speaking of former highly regarded draft picks, Marcus Littlewood continues his transition to catcher back in Clinton, where he finished 2013. Littlewood, a former shortstop taken in the 2nd round of 2010, showed great plate patience but struggled with contact through last year. He's still only 22.

What do you think about the opening rosters? Any major surprises, or promotions/demotions you expect? Comment away.