The Mariners drop the series opener in Miami after a Giancarlo Stanton walk-off grand slam. Maybe he'll be a Mariner in two years!

Share All sharing options for: 7-9: Marlins do awful Marlins, Mariners do worse Mariners 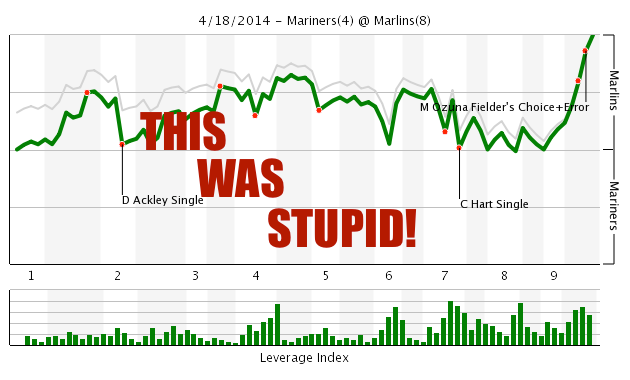 Full disclosure--I missed the entire bottom of the ninth. I watched this whole game down the street at my local Blitz sports bar, and had a good time. And it was a great game, honestly. Chris Young had a bit of trouble here and there, especially early on. He only lasted three innings, throwing seventy-three pitches to the Marlins which is kind of a yikes sentence. He escaped the first with one run after Giancarlo Stanton singled in Marcell Ozuna, who doubled only seconds earlier. After a wild pitch, the runners moved up and Casey McGehee singled in the second run and wait who are these people? Casey McGehee? Is this a cartoon character? What?

Young's scariest moment came in the third after he gave up a few more runs in the second. In fact, these first innings were pretty much a matter of traded runs between the M's and Marlins until Saltalamacchia walked up to the plate, took one look at his metaphoric World Series ring on his left hand, and hit a behemoth home run that at least qualifies for the longest one I've seen on the season yet. I wanted to give you some good, fun Mariners clips to make you feel better, but you have to see how far this ball went:

The ball flew. I screamed DAMN and slammed my fists on the table, spilling a little bit of beer. My friends were shocked, the stupid ass Marlins home run sculpture thing did whatever the shit it does, and the Marlins were up by two runs. Chris Young left the game mere moments later.

The Mariners did some good stuff in the game, for sure. After Michael Saunders singled his way to first in the second, Dustin Ackley came up and rocketed a double into the glove of Stanton, except Stanton misplayed it by like three inches, and it rolled all the way to the outfield wall. Ackley saw this and continued down the line, making it all the way back to home for a little league in-the-park home run, and everyone laughed at the Marlins. Well, for the second inning, that is. It didn't last too long and why does it always seem the Mariners are the one to help crappy teams pull themselves back into relevance and respectability?

Chris Young was pulled in the fourth for Joe Beimel, and despite an incredible Almonte triple then run in the 5th, the game remained 3-4 until the seventh inning, when Corey Hart singled in Almonte (again) to tie the game. You might notice a pattern here--for just as random and chaotic as Almonte can be, he's getting on base, and he's doing it in a myriad of ways. I know it feels like the Mariners are broken right now, and in a way they are. But it's a little exciting that one of the ways everyone expected them to be broken in (centerfield) might not be that way. But you know, wins, so um...yeah.

It was a tie game until the ninth. James Jones got his first major league hit, which was an absolute routine groundout into the infield that he beat out with freaking road runner legs that made Abraham Almonte look like he ate forty pounds of Taco Bell before every game. Yoervis Medina remained in the game in the ninth in an attempt to take the game to extras and then, the wheels fell off. Well, that's an understatement. The transmission caught fire, the wheels removed themselves willingly from the frame of the car, the stereo turned itself onto a Prince tribute radio station, and the car flipped itself into oblivion down into the deepest chasms of the salty Gulf of Mexico water.

Let's see...here's what happened in the ninth-

The worst part is that I missed all of this. I watched the game, had a few beers, then walked home right at the bottom of the ninth to think I may catch the tenth by the time I walked through my door. I came inside, took off my jacket, turned on my television and saw an ocean of orange hats crowding home plate and Stanton running home from third with a giddy smile on his face and then I immediately turned the tv off. Rough patches, small sample size, the whole monty. Man, if winning is really an easy fix, then it would be sure nice to start getting the other half of all this soon.

A tough one for the Mariners. A tough one for fans. But there are a bunch more games against the Marlins and Astros through the next couple of days, and .500 isn't too far away. End of the day, if the Mariners really are terrible and on their way to yet another high pick in the draft, then...well...they aren't the ones with a stupid neon green field and goofy home run sculpture thing. You know what else they could be? One step closer to their very own Giancarlo Stanton. You never know. So in a way, this could have been a bit of a victory for the Mariners, walk-off loss and all. But whatever. These little things may not win baseball games, but they sure feel nice when your team doesn't give you the recourse to defend fandom in other ways.