He's back and he has everything to prove. But where's he going to play?

The Mariners inability to score runs over the past week has caused them to make their first offensive shift, and while it isn't going to make the lineup mess any clearer, the Mariners just added the bat many have been clamoring for.

It's Nick Franklin, fresh off a .395/.469/.744 line in Tacoma, chip on shoulder, ready to prove the doubters wrong. It's unclear where he'll see playing time, though Jon Heyman has speculated he'll see time in the outfield, which is LL-endorsed. Franklin didn't spend a single inning in the outfield in AAA, so he'd be learning on the job in Seattle.

Moving Nick Franklin to the outfield 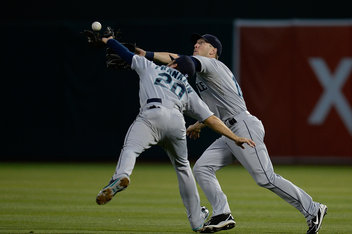 The Mariners have dismissed all talk of having Nick Franklin change positions to date, but it's time to start the conversation.

Presumably, Franklin isn't coming up to sit on the bench, which means the Mariners will have to get creative with him to find at-bats. DH, RF, and probably some shortstop. It seems hard to admit, but outside of the two homer game, Brad Miller has been a disaster at the plate this season. He only has one walk compared to 19 strikeouts, and only has three extra-base hits since April 1st. While we're all big Brad Miller supporters around here, I would not be surprised - in fact I expect - to see Franklin get a few starts in place of Miller. It's not another position controversy yet, and that would be a ridiculous thing to occur after only two weeks, but Miller might get some breathers to reset himself during this slump.

There's always the outside chance that Miller is optioned to AAA, but I don't see it happening. It seems the corresponding move will have to be one of two scenarios, Logan Morrison hitting the disabled list or Stefen Romero heading south to Tacoma. Romero hasn't done much with his platoon role, and a trip to the DL for Morrison would come at a perfectly convenient time, as he's been miserable as well and represents a redundancy on this roster.

If the Mariners do toy with the idea of getting Franklin innings in the outfield, it'll once again come at the expense of Michael Saunders, who can't catch a break. Abraham Almonte has fallen off the table himself, but he still doesn't appear to be in danger of losing any playing time. Not yet.

It's going to be a mess, and your guess is as good as mine as to how this is going to shake out. The only way this makes sense is if Franklin becomes a right fielder, but he's not a right fielder. Not even a little bit of a pretend right fielder. It's a move I've endorsed, but I endorsed Franklin getting reps AAA, not on the fly. If the Mariners knew this move could be a possibility, why didn't they give him those reps when they had the chance in games that didn't matter? It's just how the Mariners have done business this year, planning on things working out and scrambling when it doesn't.

All that matters right now is Franklin's bat. If he hits, then the Mariners will find a place for him to play, which has generally been their strategy in roster construction for the past two years anyways. Can you hit? You're in. We'll figure the rest out later.

Despite all the obvious question marks, this is still exciting. Franklin seemed like a dead man walking as soon as Cano was signed, and now he has a chance to co-exist with Miller and Cano. And he's definitely a little miffed about it all. Mad Nick Franklin seems like good Nick Franklin to have.