Saying no to Kendrys Morales (still)

Share All sharing options for: Saying no to Kendrys Morales (still)

Here we are again.

The story is the same, the player is different. The wild optimism about the Mariners offense quickly faded into knee-jerk reactions across much of the internet after Oakland wiped the floor with them, and we're back to square one after 11 games. Already.

"Kendrys Morales is still available", tweeted out a second after the Mariners squander another scoring opportunity, or maybe seconds after one of their inept offensive performances this weekend. A couple members of the media, especially national and from the day's opposing ballclub, have loved to push this button. I get it. It's easy.

Most of the people that comment here are intelligent, well-reasoned minds. You're superfans. You understand the consequences to every action, and get that moves can't be made in isolation, that there's a reaction to everything. I try to do my best to explain these as moves occur, but it doesn't always land, let alone stick. We're all irrational a little when things are going bad. If Nathan put up another poll about how this team would finish, I'm certain that the W/L record would look at least a little different than it did last week. The Mariners aren't perfect, or are they great. This can be fixed, seemingly. To some it's as easy as seeing talent that's available, and adding it to the lineup. Kendrys Morales.

On the pitfalls of player-type analysis 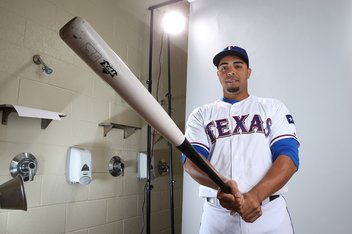 Player-type analysis is in practically all of the rumors... and it's a really dangerous way to think.

When the Mariners signed Corey Hart and handed Justin Smoak the keys to first base yet again, they essentially closed the door on Morales. That hasn't changed. While Smoak's first week seemed like he was perhaps a new man, his lackluster second week has dropped his line to something all too familiar. Corey Hart displayed big power on Tuesday, but has been mostly all or nothing while his conditioning returns. Logan Morrison has been nothing short of terrible, all while Michael Saunders continues to chill on the bench.

Above all, the Mariners just haven't hit.  They're at 87 wRC+, and in April, when everyone is tuned in most (a sad truth), "what have you done for me lately" is all that matters to some. There's not enough sample to fall back on, and future projections are met with pessimism or optimism, all fueled by what your current memory of a player is. He's fixed! He's broken again! We're all guilty of letting our minds unravel a little bit at this point. Barely holding onto the string while we kick the ball of yarn away from us, rolling downhill with the only ending paths as crushing disappointment or future glory.

As a result, the clamoring for Morales is understood, but easily refuted.

Firstly, Morales costs money. Money that the Mariners could spend in other ways, like perhaps taking on a veteran bat from a struggling team that might help patch up their looming outfield holes. They may need to make an Aaron Harang-type trade soon, especially with the uncertainty of James Paxton's injury, Erasmo Ramirez's struggles, and Hisashi Iwakuma's slow recovery. That will take money. Money that the Mariners make very clear that they don't have a lot of, whether you believe them or not. And if somebody else decides to spend that money on Morales before June, the Mariners still get a nice draft pick in return. That's still a consideration, even if the odds of getting it have faded.

Secondly, Morales can't just be dropped into the lineup with the same level of expected production as 2013. He hasn't faced live pitching in over six months, and while some of you will believe that will be a factor and some of you won't, it is far from a lock. Batters often need time to get their timing right as well, and there's every chance that by the time Morales gets himself sorted out, Corey Hart will as well. Then there's really no room for him, unless you believe that Hart can move over to right field permanently.

That requires another major leap of faith. Hart is barely healthy enough to play two of every three games at this point, and they're all at DH. By the time he gets in shape for everyday play, will the Mariners risk sending him back out to right field? I have my doubts, unless the RF situation gets increasingly dire. Even then, sending him out to right spells the end for Logan Morrison, who has been brutal but still has some potential.

If you're like me and don't see Corey Hart in the outfield as a particularly good idea, then it's back to a familiar conundrum, as all roads seem to lead to Justin Smoak. Even if Smoak continues to be the kind of hitter he was last year without taking a step forward, the distance between their offensive performances is actually quite small (109 wRC+ vs. 116 wRC+ in 2013) and some value will be lost defensively by moving Morales/Hart to first base instead of Smoak. That scenario plays out pretty close to a wash, and that's assuming bad things from Smoak and more of the same from Morales.

The Mariners could clearly be better. And they could clearly use more offense as well. But they're patched together such a restrictive lineup that there just isn't any room for a player like Morales without making serious concessions elsewhere. The risk is a lot higher than the reward, where the margins are very thin. Even if everything works out ideally, Morales doesn't make this team that much better. There's far bigger concerns in the outfield, rotation, and bottom part of the bullpen. Yes, he's a free agent - but he still costs money, and as the year goes on, teams will be more willing to part with salaries for close to nothing. If the team really wants to add a bat, they might just want to call up Nick Franklin, who has a chance to be as good of a hitter as Morales currently is, while playing all over the diamond, adding value in other ways. Eventually, the Mariners will be forced to give him time in the outfield if they don't deal him. There's no other path.

If the Mariners aren't good enough to contend without Morales, they won't be good enough to contend with him. He just doesn't make that big of a difference in production, and the Mariners have every opportunity to be buyers as the season goes on if they're within striking range. That way, they can add salary at a true position of need, which definitely isn't designated hitter.

We're here again and we'll be back again. But for now, and probably forever, I'm still saying no to Kendrys Morales.