Scott Kazmir runs over Mariners batters with a 2004 Kia Sorento, and the Mariners fall 0-3 to the Oakland Athletics. 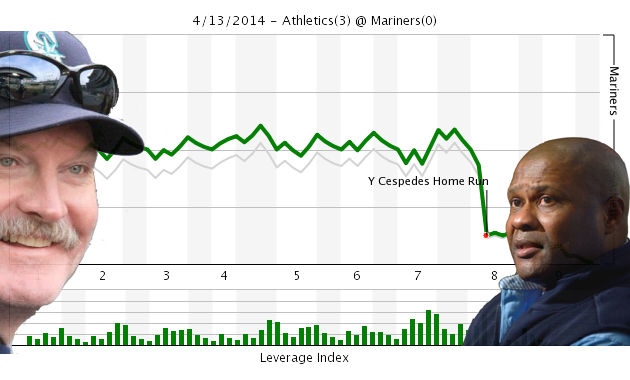 Well what we had here today was one of the worst games you could ever use as an introduction to baseball to a non-baseball following friend. See, you're always wearing your Mariners hat or whatever it is, and although they never seem to really care, they ask you questions about the team between sips of beer at Henry's or during your coffee break at work. You try to exuberantly trumpet your love for the game--Felix! The Double! America's Pastime!--but it never really works until that one day they finally seem interested enough to give a game a whirl with $15 bleacher tickets in section 310.

You are ecstatic as you roll through the backstories of each of the opening nine, and even though it's not getting through, you tell them that the Mariners signed one of the best second baseman of all time and hey, maybe that will be fun to watch! You slide your Felix jersey on in the parking lot and then even see a glimmer of excitement in your friends' eye as you mount the home plate entrance steps into Safeco, immersed into the cathedral of naturalism that is one of the oldest continuous traditions in American history. A stop at the fan shop, because your friend is interested in buying a hat. Two Alaskan Ambers for $18 to enjoy in the sun. Concrete steps, sun-warmed seats. Sunglasses. Baseball.

And then fucking nothing happens. You sit there and try to explain that it's actually really great that Chris Young isn't getting shelled. You explain the injury thing, his snail velocity and fly ball ethos, maybe add the whole he's-really-tall thing in for good measure. And that's the hardest thing about all this--Chris Young did exactly what the Mariners wanted him to when they signed him--eat six innings, give up a few fly balls in the temperate April air, and survive through a filled rotation spot to make it into May. He gave up four hits today, but what that line doesn't tell you is that he gave up a lot of high, towering fly balls that all stayed in the park. Which is exactly what we all expected when he joined the club.

And on the other side, Scott Kazmir was good--surprisingly, crazy good. And the worst part is that the Mariners decided to help him out on his road to 6IP/2H/0R/9K's--check out this at bat from Mike Zunino in the fifth. 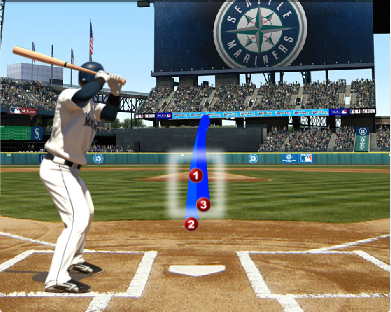 This isn't nightmare territory, but it certainly feels a bit more like a step back to 2013 from the M's catcher, who has just now started to show signs of life and the ability to at least foul off bendy things. In fact, the Mariners didn't get their first hit until the bottom of the fourth, when Brad Miller blooped a single into the outfield just past the glove of Luke Gregerson. Cano followed him up with another single and then the inning was over before you knew it.

And see, this is the point when your friend turns to you and asks you why in the hell you like this game when it's just three hours of groundouts and strikeouts. You don't really know what to tell them--it's not always like this? Just wait until Felix's next start? The Mariners aren't always awful? No, you can't really say any of those things because the thing is that you aren't having the best time either. It's nice and all that Chris Young looks like he may be able to survive a couple of starts here early in the season. It's certainly better than watching him give up dinger after dinger after dinger. But it's really disappointing when the crisis over the starting rotation seems to have neutralized itself for at least one start, and the Mariners hitters decided to just stay in bed this morning.

Young lasted six innings and ended up striking out two with three walks. He topped out at 88, as expected, and was by all means an absolutely servicable, workable, survivable injury-stop-gap starter for the day. They pulled him in the seventh after 97 pitches to bring in Charlie Furbush, who promptly walked Jed Lowrie and let Yoenis Cespedes hit a baseball very far and very hard. They were the first runs of the game. In the ninth LLoyd went to Luetge to stick with the lefties, and although he got two quick outs, he gave up a dinger to Josh Donaldson, who also hit the ball very far and very hard. Both of these home runs felt extremely preventable. Both were obnoxious, especially after seven innings of your friend checking their email on their phone because why did you take me to a baseball game? But it could have been worse, I guess.

It wasn't all boring. Justin Smoak made a really good grab early in the game, when a ball rocketed into the gap about two and a half feet away from his head that met his glove out of complete luck. His body quickly took the form of the letter X, but it was a letter X written by a three year old with a half-broken Burnt Sienna Crayola crayon. Getting outs doesn't need to be sexy, you just need to get them. Later in the game, Willie Bloomquist made a diving catch in the eighth inning that Ackley probably wouldn't have had, because of course he did something to encourage more outfield playing time! But again, I shouldn't complain: Getting outs doesn't need to make sense, you just need to get them.

But at the end of the day, it was a sleepy Sunday afternoon ballgame where the only Mariner hits were from Robinson Cano and Brad Miller. It wasn't a bad game, but...it wasn't a blast either. I started watching a documentary about 2001: A Space Odyssey in between innings on my computer in the sixth. Your friend noticed that the 65 degree sun warmed the bottom half of his Alaskan Amber in the sixth inning, so you made your way past the screaming kids and the 76-year old grandmother keeping score at the end of your row, found the nearest beer stand, and made it back in the seventh and neither of you noticed that anything had happened. In fact, you didn't even notice the A's had scored because it just kind of felt like they were winning the entire game without having scored once. That's what kind of game it was.

Tomorrow, though, the M's finally play a new baseball team, and maybe even get to have Hector Noesi, Texas Ranger throw them some baseballs meatballs. Nick Franklin is destroying AAA so maybe reinforcements are on the way by the end of the year, one way or the other. The Mariners are still above .500. Chris Young might be a band-aid that doesn't fall off. Felix is pitching soon, Seager is going to get out of his funk, and Iwakuma, Walker, and Paxton will be in the rotation in no time. The Mariners are going through a little bit of a rough patch right now, but it isn't going to last forever, and that's an absolute fact.

On opening day, I wrote a thing about how we are going to have boring games like this. But you know, that doesn't make them any more exciting, that's for sure.