One of my favorite things about King Felix is that he's constantly improving. And when I say constantly, I mean "right now".

Share All sharing options for: Felix Hernandez changes up his pitch mix

This is a table.

Now, the fact that a small-sample-size caveat needs to be slapped on this is so obvious that I won't even spend a whole sentence on it, but that's a pretty impressive trend. Felix is so much fun, you guys. So much fun that, despite the fact he's only pitched in three games, I'm going to spend this article trying to figure out what's made him so astronomically successful thus far in 2014!

First, a look at his pitch frequencies: 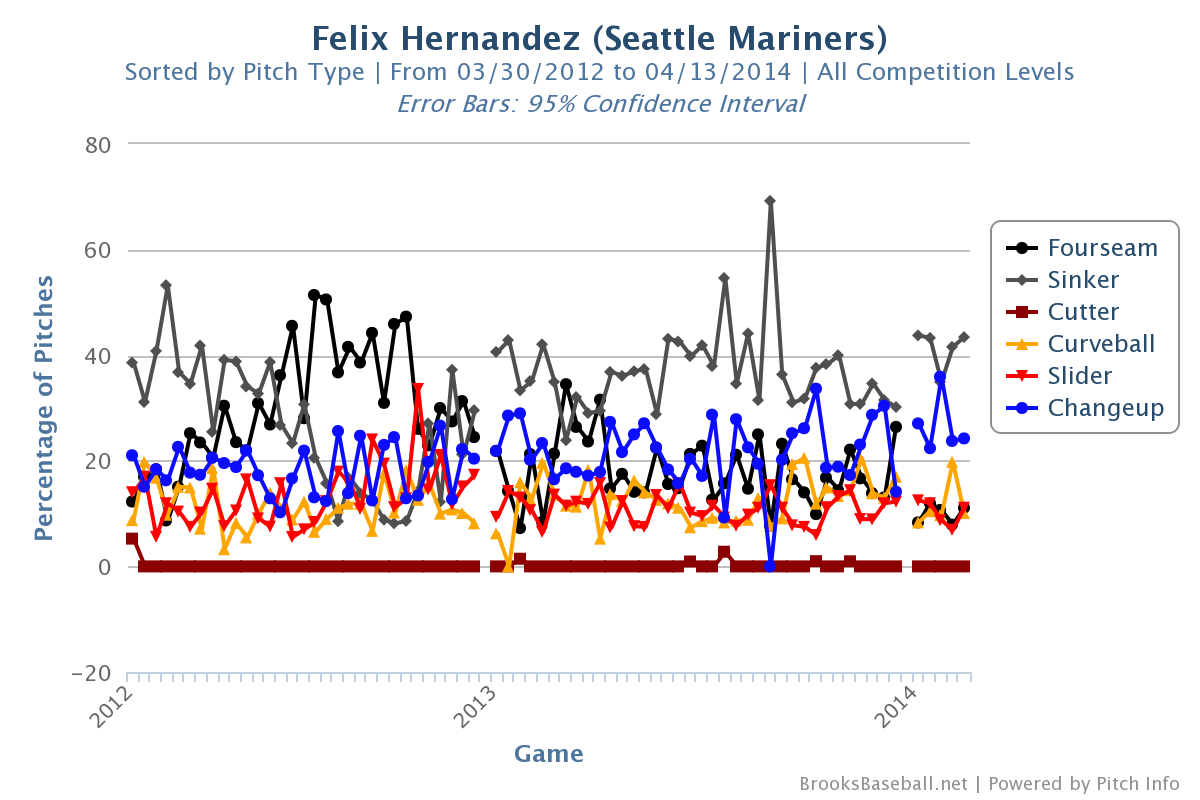 There are a few interesting things to note in that chart. The five data points on the rightmost end are Felix's five PitchF/X'd starts from 2014 (the first two were in spring training). One observes that, on opening day, Felix threw the highest percentage of changeups he has ever thrown in a game. This led to the single highest number of swinging strikes on changeups that Felix has ever gotten in a game. It also led to the third highest Whiff/Swing rate on changeups that Felix has ever gotten in a game (min. 10 changeups). In other words, Felix's best pitch was more or less the best it's ever been, and he threw it the most he ever has. So, uh... pretty obvious why that game went the way it did.

This brings up the topic of Felix's changeup, which is a pretty fascinating pitch. Conventional wisdom dictates that there should be a large velocity gap between a pitcher's fastball and his changeup. For Felix there is no such velocity gap - but the pitch is still insanely effective. Felix, of course, has picked up on this and begun to rely on it more and more often. You'd think that greater exposure to a pitch would reduce its effectiveness, but nope. Felix's changeup has been getting more and more whiffs per swing as he's increased its usage. It's amazing.

Here's how good Felix's changeup is: in his second start of the year, he didn't really have his swing-and-miss stuff, and he still held the A's scoreless into the ninth inning. It was called strike day in the O.co Coliseum, as Felix netted eight strikeouts on only ten swing-and-misses. He was throwing a lot of curveballs and sinkers, and the Athletics didn't miss very many of them, but the changeup generated five strikeouts as Felix won the game.

As for the third start, in front of the Supreme Court, well... the curveball and slider were the story of the night. Check out this table from Texas Leaguers.

Felix threw a combined twenty curveballs and sliders. The A's did not put a single one into play. Eight were balls, five were whiffs, and six were called strikes. The A's, it seems, were sitting on the fastball/change combo (without much success), and whenever Felix broke out the Royal Curve, they just rolled over. It must have been a little embarrassing, honestly.

In the above PitchF/X recap of Felix's dominant first three starts, you may notice that there's a pitch I didn't mention: the four-seam fastball. That's because he hasn't been throwing it. Over the last two years, Felix has slowly begun to eschew his four-seamer in favor of his sinker and his change, and the results - well, you've seen the results. They've been pretty darn good, as his whiff rate has steadily increased despite the fact that the two-seamer isn't a swing-and-miss pitch. Whether it's because the two-seamer is a better setup for the change or because the change itself has been improving, Felix's change to his pitch mix seems to have made him a better pitcher.

He's getting... better. Yep. I just typed that.

Felix is so much fun, you guys.