1-0: Mariners surprise Angels, themselves in 10-3 victory

Despite some early theatrics from Mike Trout, the Mariners defeated the Angels 10-3 on Monday, winning their eighth-straight season opener. Felix was Felix.

Share All sharing options for: 1-0: Mariners surprise Angels, themselves in 10-3 victory

The ball left Felix's hand and touched Mike Trouts bat for just a second, and then it went really high up in the air and really far away, like so far that it went beyond the fence away from where any of the baseball players could get at it, which is kind of crazy in principle if you think about it.

For a second, it felt like the game was already over. The bottom of the first had passed with no incident, including Robinson Cano's first Mariner at bat: a groundout to first he dogged out to end the inning. It was met with cheers, because he was met with boos as soon as he left the on-deck circle for the first time wearing a hat that had the letter 'S' on it.

Most of those boos came from this man, Herbert "Hank" Jepsen, an unemployed former private security guard and expatriate Yankees fan living in Sacramento, who--feeling betrayed upon learning of Robbie Cano's departure from the pinstripe empire--saved up for opening day tickets to make his displeasure known on national television, where his ex-wife Carol would finally be able to see that he's still got some cool left in the tank, despite the unfortunate fact that he was wearing his wedding ring on the very hand that held up the sign he made at the Roseville Fedex/Kinkos only three hours earlier: 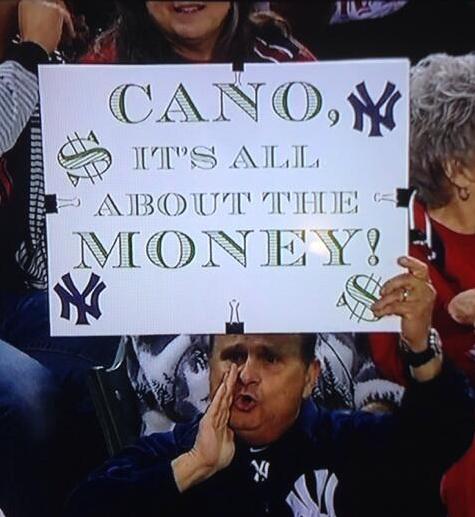 But Hank isn't the story here. Nope. The story, for a second, was the epic, colossal, behemoth home run from Mike Trout off of Felix Hernandez, who was pitching on a national stage and was quickly behind 2-0 after Trout's home run. It really felt over for a minute, and even though these Angels have been so terrible for two years, the voices of forty thousand cheering the best position player in the past 50 years home while Albert Fucking Pujols came up to the plate was kind of terrifying.

But even that wasn't the story of the night, despite whatever ESPN may tell you. It didn't ultimately matter. Robinson Cano wasn't up to bat and Hank was busy texting Carol with his sign between his legs, mashing the buttons on his Blackberry Bold with oversized thumbs and completely ignoring King Felix racking up eleven, yes eleven Angel strikeouts in his six innings pitched. No, Hank didn't notice when Erick Aybar reached on a throwing error from Kyle Seager, or when Aybar scored after Albert Pujols crushed a baseball past the head of Dustin Ackley, who immediately took about six routes at the same time to catch it, smashing his body into the outfield fence in terror, realizing that they never asked him if he wanted to be a leftfielder and oh god this is terrifying what have I gotten myself into 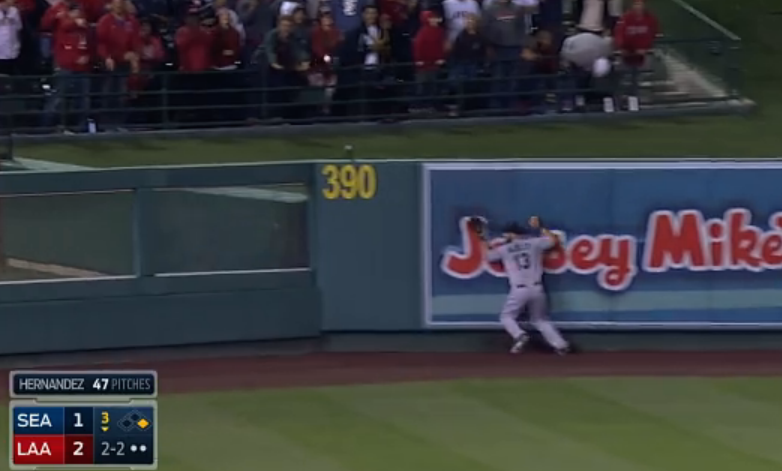 Felix followed this up with a walk to Josh Hamilton, drawing a visit to the mound from pitching coach Rick Waits. You kind of have to wonder who said what here, because while Rick Waits is the pitching coach on the Mariners, and he's 61 wise years old, he was talking to a pitcher who is someday going to be in the Hall of Fame. A pitcher who once pitched a perfect game, whose nickname alludes to a dark time in human history where incredibly violent and corrupt political and social stratifications bestowed favor onto a select few who were closer to gods than men. That's the person Rick Waits was talking to. King Felix.

As previously mentioned, Felix had 11 strikeouts through six innings. His little bit of trouble against Trout and in the fourth racked up his pitch count a bit, which is kind of a bummer because he was straight dealing through the fourth, fifth, and sixth. Had he settled in quicker, thrown less pitches, who knows how many strikeouts he would have had by the game's end, possibly breaking his own record of 12 on Opening Day in 2007.

But Hank--poor Hank! Felix had to sit down eventually, and while he was waiting for Carol to text him back--she never did, of course--he noticed Robbie Cano coming back up to bat. His blood pressure skyrocketed, and he dropped his Diet Coke while scrambling for his blackberry and custom sign now cherished like his firstborn. Right then and there, he decided to abandon the whole Carol project and text his old security buddies from the Bronx, snapping a blurry pic of Cano taking practice swings as he typed gonna jog out another grounder and 240 million for a lazy bum is what I say. Then Cano walked into the batter's box and did this:

Hank was furious--dumfounded. The legs, running out a dribbler that should have been an easy out in any other circumstance. But things were different. Something was in the air. Jered Weaver was pitching a pretty great game, high-eighties fastball and all, but his command was all over the place. He didn't have much help from home plate umpire Joe West's zone, but when everyone is getting shafted at least the playing field is equal.

Weaver walked three Mariners tonight, two of which scored in the top of the sixth. With Justin Smoak and Logan Morrison standing on base, Kyle Seager ripped a double over the head of right-fielder Kole Calhoun, sending Justin Smoak home to score and bring the game within a run. 2-3. But then the windmill arm of Jeff Datz Rich Donnelly took off and Logan Morrison rounded third. The ball was home before Logan Morrison was ten feet away from the plate.

For some reason, the M's bats continued through the game, and they drove Weaver to yell bad words into his mitt on the way back to the dugout to sulk in the seventh. In the seventh, Dustin Ackley scored after a Mike Zunino triple, coming after two at-bats that saw the Mariners' catcher reach for bendy things that seemed to blow his 23-year old mind. The game was tied at 3, and Mike Scioscia brought in reliever Fernando Salas to get out of the inning. The good news was that Felix was going to be pulled after this, and the loss, however stupid the whole thing may be, was now going to be pinned on someone else thanks to Zunino.

But then Salas gave up a double to Abraham Almonte, your 2014 Mariners leadoff hitter. 4-3 Mariners. Felix was in line for the win. The entire city of Seattle erupted with incredulity and excitement. Felix shook his fist and yelled a bunch of things in Spanish and had this huge, shit-eating grin on his face because his team was finally, finally looking like it was capable of giving him run support after ten years. During this, Hank was scrolling through his Blackberry's archive and reading old texts from Carol between sips of his Diet Coke he salvaged, now half empty and sharing space on the concrete floor and inside the plastic commemorative Angels cup that cost more than his usual bar tab.

It would be lying to say the next few innings were anything short of trauma inducing--Yoervis Medina somehow getting Chris Iannetta to pop out before letting Aybar single his way on base, Charlie Furbush getting the second out before he was pegged in the shin on a Mike Trout comebacker, and Tom Wilhelmsen pitching in a major league baseball game. But Tom had a--gasp--great outing today, striking out only David Freese but disposing of every batter he faced through 1.1 innings, ensuring that as long as all went well the M's wouldn't have to face Mike Trout again in the month of March.

As Kevin Jepsen took the mound for the Angels to face Zunino, M's closer Fernando Rodney was warming up in the pen. Hank had actually put his phone in his pocket, realizing that he had maybe one chance left to boo the ever-loving shit out of Robin$on Cano, and was looking at the lineup card folded inside his one-dollar commemorative game program he bought outside Angels Stadium from an unmarked vendor. Surrounding him were Angels fans, nervously biting their nails and hoping their new $144 million dollar man could come up to save the day in the bottom of the ninth. Hank hoped for this too, and failed to see the irony in the whole thing.

The Mariners were on their way to letting that happen. Mike Zunino and Almonte quickly struck out, leaving Jepsen only an out away from getting into the eighth to possibly earn his first win of the 2014 season. Instead, Brad Miller singled. Robinson Cano doubled. And then, friends, the first Mariner home run of the year came off the bat of Justin Smoak, scoring Miller and Cano and sending wishy-washy Angels fans out the exit turnstiles and into the brisk California evening. Three minutes later Logan Morrison and Michael Saunders had walked, and Dustin Ackley scored them both with an RBI triple. 10-3 Mariners. What.

Hank had left Angels stadium long before this. It was, by all accounts, quite the selective evening for the guy--he didn't even notice poor Angels' hitting coach Don Baylor break his leg while catching the ceremonial first pitch, nor did he stick around to see Robinson Cano's double or the M's blowout victory come to fruition with a perfect ninth from Danny Farquhar. He wasn't around to see Fernando Rodney blow a save because it didn't happen. He wasn't there to see the Angels trounce the M's because they didn't. All those things will happen over the next few weeks, but Hank didn't care, because he was in the car and was reading a text from Carol.

Was that you on TV? it said

Yes he responded, with pride.

Christ, Herbert will you ever grow up?

Hank put his phone in the cup holder and turned on REO Speedwagon so loud that it shook those loose screws between the armrest on his drivers door and the rusting burnt sierra painted metal frame it sat on. By then, he was already on I-5 with the windows down, his Yankees windbreaker and Yankees long sleeve undershirt and Yankees custom jersey blowing in the midnight air. It was an important thing, what he did. Someone had to tell off that traitor, after all, and if Carol didn't understand then she didn't deserve him in the first place. It's a lot of work, being a fan of the greatest team to ever play the game of baseball.

Hank realized that they weren't all going to be good days. He wondered how other fans felt after going through long periods of suffering and disappointment--an altogether unfamiliar experience to him. But he stopped thinking about it there, and he didn't bother thinking about the other part: the part that shows what its like when fans used to disappointment feel something altogether unfamiliar and new. That concept never even occurred to him.

The Mariners are probably going to do a lot of stupid shit this year. They are going to strikeout when they need big hits, and they are going to send some really sketchy arms out to pitch some really important innings. Someone is probably going to get hurt. The outfield defense is going to be gross. But for the first day of 2014, the Mariners did something kind of unfamiliar and new, even though it was their eighth-consecutive Opening Day victory, and that's something to write home about. In two years Hank is going to have his Yankees back up and running. Until then, the Mariners are going to surprise everyone, one way or another.