Where DJ Peterson hits his first big-league (sortof) home run, Randy Wolf gets hit a bunch, and the Mariners rally late in the game to oh wait why are all the starters in the locker room, there is baseball to be played!

Share All sharing options for: Reds defeat Mariners, sort of

The Mariners lost to the Reds this afternoon, with a final score of 9-10. Though you wouldn't think that would be the case midway through this game. No, not at all. See, Randy Wolf fell into a rough patch in his second stint of the year, giving up four runs on three hits in three innings pitched. He also had two two-out walks, which is exactly the kind of thing you don't want to see happen to a 37-year old pitcher trying to come back from his (second!) Tommy John surgery. Getting to two outs isn't the crapshoot it can be with Hector Noesi. Getting to three is.

Part of it is that, yes, it's his second game, and it's still (relatively) early in spring. Another part is that well, this is probably about what Randy Wolf can do today, in 2014. The unfortunate reality is that the good comeback stories are only good because there are sad comeback stories to counter them. Lloyd McClendon said that Wolf's job wasn't as bad as his box score might indicate. I'm not an expert at pitching mechanics but this is a bit dicey:

Wolf, having trouble spotting pitches to Brandon Phillips in the first, leading to a walk: 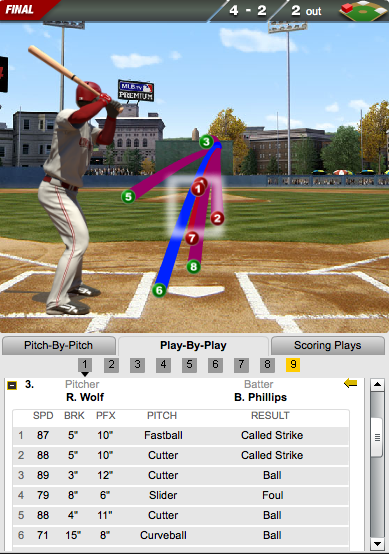 Wolf calming down and trying to hit the strike zone...to Brandon Phillips, leading to a dinger: 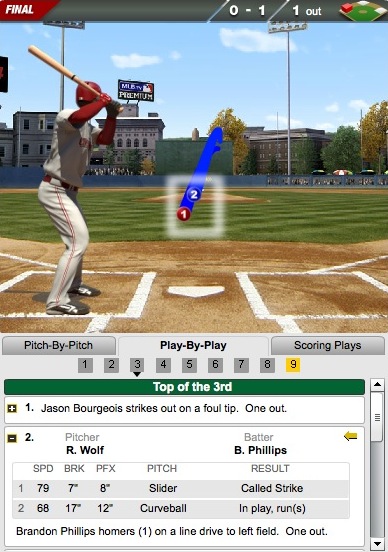 I've never actually pitched beyond trying to throw a curveball to my friends while playing catch, so if this is totally off the mark, someone please tell me so in the comments. Still...this isn't really a surprise. The real key to Wolf's performance today is that he said he felt good, that he had trouble with his curve and cutter but left the game without pain, even going as far as to say he felt better than he did in his last start. He also said that people get "caught up in results" in spring training, which is one one hand true and silly, but on the other just about the only barometer people have to measure his continued success in coming back as a productive major league pitcher. If he can't locate the edges of the zone, I would rather have data to confirm it than an "I feel good, seriously I swear it will get better" promise. That's how all this works.

The good news is the Mariners had themselves a little bit of an exciting mid-game rally starting in the fifth inning. Seeing 8-0 on the scoreboard led Kyle Seager and Nick Franklin to take walks (that, or the fun part of spring training when minor league arms start pouring out of the woodwork), which were scored by a heads up single from Justin Smoak from the right side, an RBI groundout from Corey Hart, and a single from Dustin Ackley, who is either finally starting to figure his shit out or just using spring training to yet again confuse everyone from here to eternity. The only rally killer here was Logan Morrison, who went 1 for 2 on the day with a walk. Corey Hart apparently looked okay getting the start in right field, although he didn't really even see any balls. Divish has an interview with McClendon saying he is probably going to see some time at DH in the coming games, so that will be interesting to keep an eye on.

As exciting as the near-win rally was, my favorite part of the day was a solo home run from D.J. Peterson. Check it out: (gifs courtesy Seattle Mariners)

Peterson is probably a long way from the big leagues with his jaw injury and all, but it's pretty exciting to know that there is at least some untapped talent still waiting in the depths, even though it has felt like the past two years have consisted of digging up seeds that had yet to bloom, leaving the garden torn to shreds.

Abe Almonte continued his case for breaking camp in center today with a great catch, much to, I'm sure, Colin's delight. Mine too. Almonte is getting more and more exciting by the day, and stuff like this almost makes me forget Guti won't be wearing an M's uniform this year. Well, almost. That's hyperbole. I can't even enjoy something new without wallowing in the past. Alright, here, go!

Tomorrow night, Blake Beavan takes the mound against the Dodgers, but not before Erasmo faces Ryan Vogelsong, the San Fransisco Giants, and BEASTMODE HIMSELF, MICHAEL MORSE. Somewhere, Kendrys Morales is eating pork BBQ, and I miss him.