Rangers get four from Furbush, one from Mariners

Erasmo pitches through five scoreless, but the Mariners fall to the Rangers Wednesday, 3-5.

Share All sharing options for: Rangers get four from Furbush, one from Mariners

There are only five days until real baseball. Five days until the Mariners head to California to face the Angels in a game that will be televised live on ESPN. On that broadcast Eric Wedge will be wearing a headset microphone, watching Robinson Cano play baseball for the Mariners.

Just think about that for a minute, and forget everything that's happened in the past few days. Veteran-grit Eric Wedge watching Robinson Cano take at bats for the Mariners in a game that counts, from the press box or studio, wearing a suit and a tie.

If that doesn't make your day just a little better, let's move on to the game that was played today. Yes, the Rangers piled on four runs in the sixth inning to take the lead and eventually win the game, but Erasmo was great today. There have been a lot of positive things said about Erasmo's success this spring, mostly from looking at his post-game success by counting strikeouts and noting how few hits and walks he has managed to rack up. Lloyd McClendon's fiery response when asked about Erasmo was interesting, then, to see that the 23-year old Nicaraguan has managed to get lucky so far while throwing too many strikes, especially in 0-2 counts. You know, "Noesi-ing."

But Erasmo came out today and pitched five shutout innings, giving up only three hits while striking out six. I'm not advocating that he needs to take eight pitches to get a strikeout or anything, but here are three of his strikeouts from today's game: 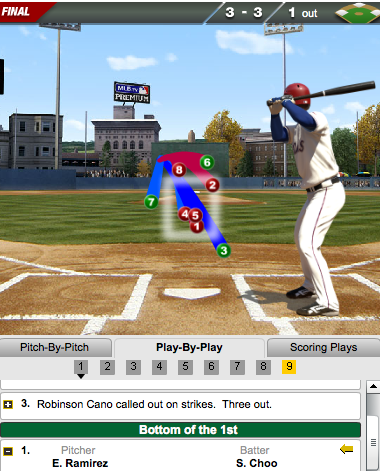 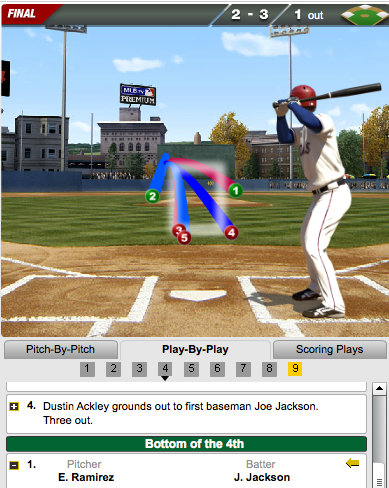 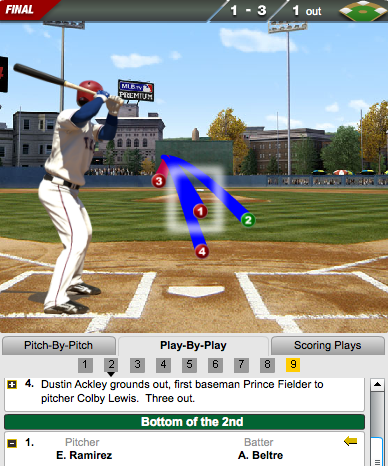 Again, this isn't perfect. But it's not Noesi-ing, either. Apparently, McClendon kind of scoffed when asked if he has any added any clarity on the makeup of the rotation, but cracked to admit that Erasmo is going to break camp as the #2 guy. And today's outing suggests that well...maybe that's going to work for a while.

After Erasmo gave up a single to Adam Rosales to start the sixth, he was pulled for Charlie Furbush. Ten minutes later, the Rangers had four runs following back to back singles and a home run to Kevin Kouzmanoff. Joe Beimel didn't have a wonderful seventh either, giving up a double to Robinson Chirinos followed by a walk to Michael Choice, a sacrifice bunt to move the runners, and then an infield error by WFB. But forget about all that mess. We owe it to ourselves, at least, for the last of these spring training games--especially ones where the Rangers pull their starters in the fourth inning on their way back to Texas. The M's rotation is set on paper somewhere, and Erasmo was great. We are so close. SO CLOSE.

The M's took until the sixth to score themselves, following a pretty good day from Rangers' starter Colby Lewis. As soon as he was pulled, the M's started their rally: first, a single from Brad Miller, who was replaced on the paths by Chris Taylor and quickly forced out at second. But this meant that Robinson Cano was on base for Justin Smoak's two-run homer which cleared the bases for back-to-back hits from Michael Saunders and Nick Franklin. And then Dustin Ackley, whose single scored Michael Saunders. They would be the only three runs the Mariners got today, but they were all scored by likely regular members of the 2014 Seattle Mariners, which is nice.

Lastly, Nick Franklin. It sounds like our mass-hysteria response to his two outfield innings last night may have been a bit premature. Not only was it Nick's idea, but he elaborates on it in a quick piece from Ryan Divish this morning, realizing that he has lost the shortstop battle and still trying to make his way onto the team any way he can. Here's Divish--

"This is just me trying to be versatile and I’m trying to play the game," he said. "Some way, some how I want to get on the field, whatever it takes."

He knows he’s lost the shortstop job to Brad Miller. He wouldn’t come out and say it but admitted the chances of him getting every day at-bats is gone now.

"I’m not going to sit around and wait for someone to get hurt, that’s not right," he said.

That feels nice. Really nice. I'm not going to bring up any of those other things that are chasing the Mariners today like a rabid dog, because baseball starts in five days and that day will have Felix Hernandez and Robinson Cano and Brad Miller on my television and I will be drinking beer and enjoying myself. That's awesome. But there are also other things to be excited about, despite how loudly everyone wants to yell about the other stuff, and this is one of them. Don't forget that.