The Mariners fell to the Padres 7-2 on Friday, but Eddie Vedder was probably watching the Cubs so whatever.

Well, it wasn't quite the James Paxton outing we were hoping for, and the Mariners followed their prized lefty prospect down the road to a rough outing in Friday's 7-2 loss to the Padres. Perhaps they were just trying to make him feel better by not showing him up once he left the game, or maybe it was that they just played bad baseball. The reality lies somewhere in between the two.

Like his last outing, Paxton's line on the night clouds what really happened a bit. He ran into a little trouble in the second after a 1-2-3 first, giving up back to back singles to Yonder Alonso and Kyle Blanks before walking Yasmani Grandal on eight pitches, which were all fastballs. Once again, Paxton was throwing a lot of fastballs, so his results can't really be attributed to in game strategy or anything. In addition, his mini-meltdown in the second definitely seemed stress induced rather than stuff-related. He didn't get any help from home plate umpire Adrian Johnson, either--here's his walk to Yasmani Grandal which loaded the bases: 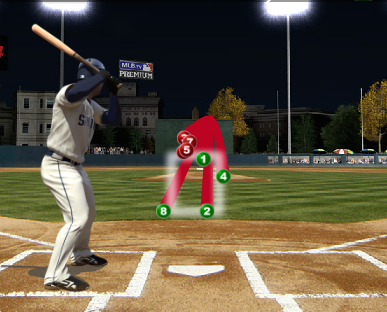 Yikes. He could've been out twice here with someone else behind the plate. But Paxton settled down after a visit to the mound by pitching coach Rick Waits (It's going to take a while for my fingers to type this instead of Carl Willis), and returned to form for another 1-2-3 third inning. He walked Kyle Blanks to start the fourth, and quickly saw two on after errors by Brad Miller and Abraham Almonte on the same play. More defensive woes...and my Brendan Ryan shirt is still wrinkled in my closet as I write this. Paxton's line on the day was 4IP 4H 3R 2BB 4K.

The real fun came in the fifth and sixth as Zach Miner decided to gift the Padres with a bunch of doubles, which was nice of him and everything, but as a player in the Mariners organization he's supposed to be a little more selfish toward the other team. When I wrote that last sentence I laughed to myself about the "player in the Mariners organization" part, but then I saw that he's on the list for the long relief role in the bullpen this year. I wondered if this was a bad thing, seeing as yet another post-Tommy Johns non-roster invitee topping out at 90 in competition during late March is just about the most Mariners thing ever, but you know, Hector Noesi. So to hell with it, I don't even know what to think anymore.

Brad Miller continued to impress both in the field and with his bat tonight, putting weight behind both that Peter Gammons tweet from earlier and just about everything posted on this website in the past two months. On one hand this is exciting, and if he keeps it up, you're going to see that word, "impress(ive)" posted on national sites in May from those few baseball writers that pay attention to things outside LA and the northeast. On the other hand, maybe Brad Miller is actually just this good, and what's happening isn't this incredibly successful stretch of spring training games but just, you know, Brad Miller. I want that to be the case, because in a way, that's even more exciting.

So there was a Brad Miller double, a Robinson Cano double, and a failed challenge in the eighth from Lloyd Mcclendon following a bases-loaded groundout from Austin Wilson. Dave Sims was off for the night, and after trading some radio time between Rick Rizzs and Mike Blowers, the familiar do-it-all ROOT anchor Brad Adam came over for the play by play. I have to admit I was skeptical for some reason, but I actually really enjoyed his work tonight.

Lastly, there was a brief fracas on the base paths leading to a challenge in the bottom of the fourth. It came after Logan Morrison reached on an error, wherein he was quickly replaced on the basepaths by Leury Bonilla. Leury Bonilla was playing in his fifth spring training game, probably ecstatic to still be wearing a Major League uniform this late in March having played in the minor leagues for the past nine years. As he squished his oversized batting helmet down onto his head, he took an eager lead off the bag, juggling his feet in the dirt on the way to second in sync with his assuredly rapid heart rate. can't mess this up gotta show em what I got he thought. get that lead get it you can take second play in another game tomorrow gotta impress em.

He didn't even seem to notice the pitch from Ian Kennedy, or the first part of the throw back to the bag to tag him out. wait no wait no no I should get back shouldn't I he thought as he stumbled back to the bag without touching it, stopping a full six inches away as his shoulder was swept by the tag. Out. that's it its all over for you Leury, you blew it pack your bags it's over. But then the umpire waved his arms sideways shouting Safe!, having apparently missed the tag altogether. oh...oh god keep your head down and your mouth shut Leury don't let em notice you you can still get out of this one alive.

Padres manager Bud Black ran out of the dugout with a challenge, and as the umpires huddled around the tiny monitor to review the call Leury Bonilla's heart was beating so hard he couldn't feel the tips of his fingers. This was it. Make or break. Impress the team or be sent back to the showers. The final stop for Leury Bonilla. Then, the umpires emerged from their review and upheld the call. Bonilla was safe. He was still in good graces. Maybe he was going to be a Mariner someday after all. The Mariners. Major League. He smiled. I wonder what it's going to be like? Two minutes later the inning was over and he was left stranded on first base.

Leury Bonilla isn't going to be on the Mariners this year, but for a few brief minutes tonight, he found out exactly what it feels like.