Is it real baseball yet?

Share All sharing options for: Erasmo and the Mariners beat the Cubs in sleepy 3-0 win

In a lot of ways, today's 3-0 victory over the Cubs was about as stereotypically Mariners as you can get for a game of baseball. Midseason form in March. By the time the Mariners had gotten on the board in the 5th inning, the rest of spring baseball had been treated to an Albert Pujols home run, a Peter Bourjos RBI triple, and a two-run Southern Hemisphere dinger from Yasiel Puig against someone pitching for team Australia who shares double duty as president of both the Eric Sogard and Jonny Gomes fan clubs. Seriously, look at this guy: 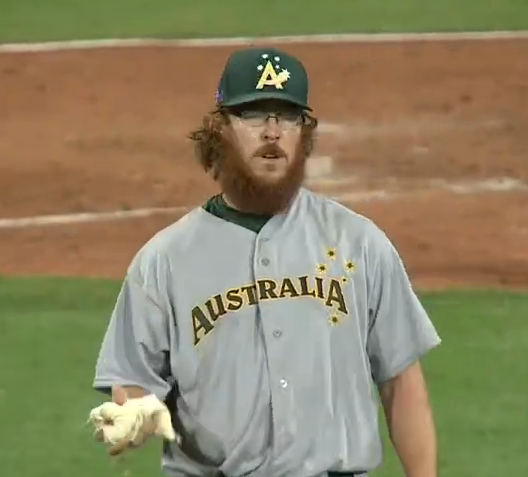 Meanwhile over in Peoria, the Mariners had six easygoing scoreless innings of Erasmo Ramirez, who just in the theme of consistency we are going with here, gave up four hits to his four strikeouts. He lowered his spring ERA to 0.96 with his outing today, and it's pretty safe to say that he's going to be breaking camp in the M's rotation. Part of this is because he has had an absolutely great spring, and statistics aside, shown much better command than in previous years, which had always been a nagging issue with him. Another part is that behind Felix Hernandez there is oh god the Mariners signed Robinson Cano what were they thinking

So yes, while the rest of the baseball world is blowing up with excitement, the Mariners quietly trotted out an oft-passed over pitching prospect (if you can even still call him that), manufactured a few runs thanks to sacrifice outs from Kyle Seager, John Buck, and in the ninth inning, Endy Chavez, and watched as the W rolled in like it was all part of the plan. Unfortunately, Dustin Ackley went a meager 3-4 today, opening doors for some valid concerns about the guy. He hit two singles and only one double, lowering his average on the spring to .467. Yikes.

Joining Ackley in the disappointment camp was the aforementioned Robinson Cano, who actually didn't get on base during one of his at bats. I know, it took me a minute too. This could be the kind of thing we have to look forward to for the rest of the year, which I really didn't want to believe when people told me not to trust his spring statistics. Well what else are we paying him a quarter of a billion dollars for? Look and see for yourself:

Hard to believe, but there it is.

In all seriousness, there was a really incredible double play in the third inning with a little minute of pickle thrown into what on the radio sounded confusing as hell. I found a video of it, which made me all the more excited for real baseball to start. Watch Robinson Cano in this, starting the double play, looking at the runner caught between a tag, and then just casually taking the throw for the force out at second without flinching, walking away like he's leaving an exploding building in an 80's buddy cop action movie. This statement will easily be played out by April, if not already, but holy shit you guys. Robinson Cano is a Mariner.

There were more defensive mishaps here and there, apparently. It sounds like there was a dropped ball from Abraham Almonte in the outfield midway through the game--I didn't catch this though. Some have said it's spring and bright and made excuses about this and that, but I think it may have something to do with this:

Jesus Christ, Willie, make up your goddamn mind. I'd rather choose to believe that this actually happened instead of it being a simple scorekeeping error. I'm just jealous of the fun had by that hairy Eric Sogard guy up there, and I want some Mariners action for myself. In fact, the closest tension we got was to watch Fernando Rodney come into the game in the eighth, though he wound up with two strikeouts and a walk in what could have been a much, much worse outing. Yoervis Medina came into the ninth to get the save, and the Mariners took the game 3-0. Bored.

Tomorrow the M's take the San Diego Padres at 7:05PM, and it sounds like it will actually be broadcast live on the radio this time. I'm headed out to Spring Training a week from today to catch the last two games--will I meet anyone down there?