Where the Seattle Mariners are and will be from

Two countries dominate the Mariners roster and hold the key to future success.

Share All sharing options for: Where the Seattle Mariners are and will be from

I hope you find this as fun to fool around with as I did to make it. The birthplace of every Mariner on the 40-man roster, mapped. (Click the image to check out the map.) 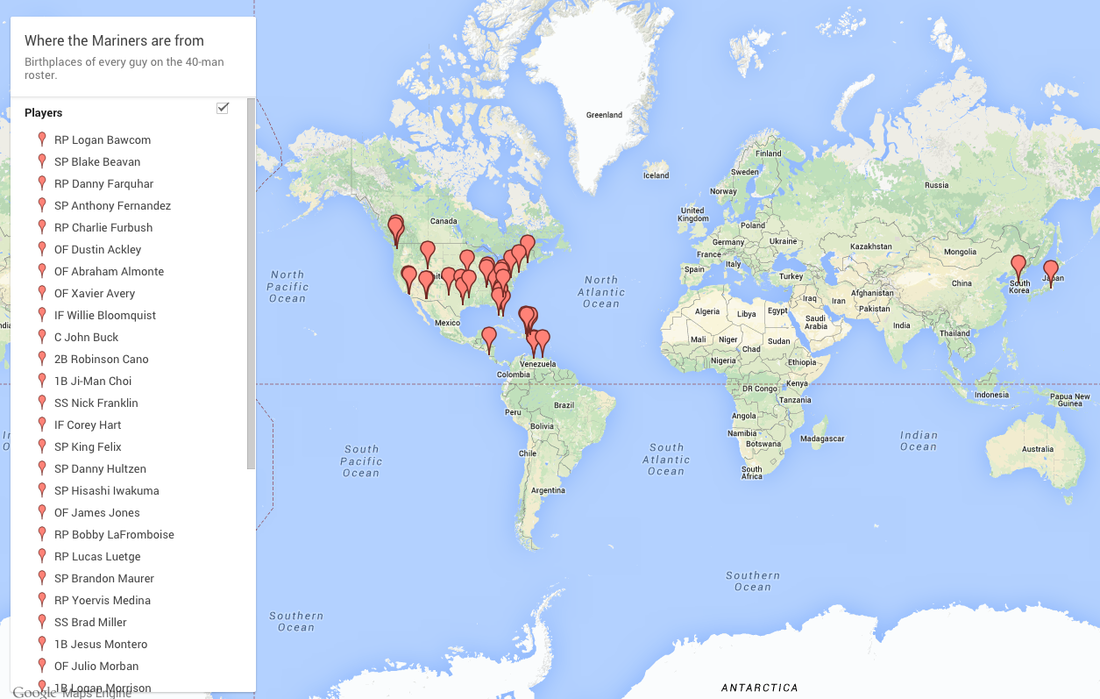 The map is something to waste a few minutes on (see if you can find the one city that's spawned two Mariners), but also shows why the Mariners are spending their scouting budget where they’re spending it.

Zoom in on the clump of pins in the Caribbean. They’re all on one island—one-half on one island, actually: the Dominican Republic.

Fifteen countries were represented by at least three players on a major league roster in 2013, from the United States (943) to South Korea (3). The 15 nations have a combined population of slightly over 800 million people. If each of the 15 countries was represented on the Mariners roster in accordance with its population, the roster would be arrayed thusly.

But of course, each country is not represented equally by population. For reasons of culture, geography, economics, and demographics, some nations are far better represented in Major League Baseball than others. Here is the actual distribution by country of the Mariners' current roster.

The United States is more heavily represented than you'd expect from the population data. This might seem obvious since Seattle is in the United States (for now), but is nevertheless consequential. Most of the M's major league roster now and for the foreseeable future must be found right here in the 50 states, via the draft.

But it's also obvious why the Mariners are betting big on the Dominican Republic. As you can see, the D.R.—part of the "other" category when assessed by population—provides nearly 1/5th of the Mariners roster. A country that by population should contribute 0.47 players to the M's roster contributes 14 times that number. If you want bang for your scouting buck, the D.R. is the place to be.

The Mariners' new academy in coastal Boca Chica (which looks like an extremely pleasant place to visit) cost $7 million. It will pay for itself if it turns out just one league-average player. Mind you, that player won't play a game at Safeco until the 2020s, but maybe the lure of playing with a 40-year-old Robinson Cano will provide motivation. If having Cano—born and raised in San Pedro de Marcoris, D.R.—in a Mariner uniform gives the team an advantage when trying to sign young Dominican players, it might make the final years of his deal a little less painful.

Venezuela, birthplace of four current Mariners, will likely continue to be a source of talent. The M's are one of seven MLB organizations with a team in the Venezuelan Summer League, and, for what it's worth, won the league championship last year behind the powerful bats of Yordi Calderon and Gianfranco Wawoe.

The tendency when looking at international scouting is to get caught up in "emerging markets" like China or Australia or Italy. But the Mariners are being smart in putting their money where the talent is.

Mariners by Nation of Birth: