Moving Nick Franklin to the outfield

The Mariners have dismissed all talk of having Nick Franklin change positions to date, but it's time to start the conversation.

Share All sharing options for: Moving Nick Franklin to the outfield

Baseball officially starts in five days. MLB's opening day commences, with a limp thud, on Saturday in Australia. The Mariners still don't play their first game for two weeks, but they're running out of time to deal Nick Franklin before they are forced to send him to AAA.

There's really only two possible outcomes at this point. Brad Miller has done more than enough this spring training to fight off any sort of position controversy, and other teams know it too. That's why you aren't seeing a single Brad Miller trade rumor, but upwards of five different teams have been connected to Nick Franklin. The Mariners haven't been motivated to trade him yet, presumably because a) they don't have to and b) they don't want to.

Indeed, the Mariners have a good problem -- too much of a good thing. If Franklin isn't traded, which he shouldn't be if the return isn't right, he'll head back to Tacoma and hopefully rake. This move isn't without risk though, and there's a possible consequence that enough people aren't talking about. Many seem to be convinced that Franklin is going to start destroying the minors the second he's sent down, a foregone conclusion. It isn't. If Franklin mentally struggles with taking a step backwards in his career or gets injured, his trade value (and career in general) starts to spin down the toilet. In order for Franklin to hold, or improve, his trade value, he has to be successful in Tacoma.

Questioning the legitimacy of a true position battle 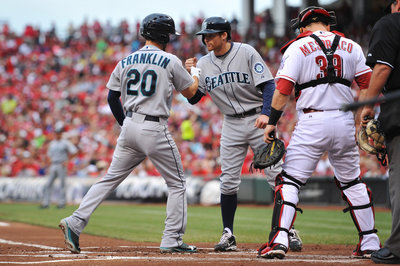 Nick Franklin is still here, but he isn't going to play in the outfield...yet.

He probably will be, and he'll probably play a lot of shortstop, at least while Chris Taylor is still in Jackson. But it's time to end the charade. The Mariners need to make plans to start teaching Nick Franklin how to play in the outfield.

If the Mariners aren't going to deal Franklin, then they need to take advantage of their surplus. Franklin is a wonderful luxury to have as depth, but the odds that one of Brad Miller or Robinson Cano (as durable as they come) are going to get significantly injured aren't high. While it's premature to call playing Franklin exclusively in the infield a waste, saying it's a missed opportunity isn't.

I get why the Mariners haven't done it yet. They've needed teams to believe Nick Franklin is a shortstop, and a shortstop first. It's a game of posturing, and you can't blame them for doing it. All inquiries towards Lloyd McClendon, other coaches, or Zduriencik himself have been mostly dismissed. From a motivation standpoint, Franklin needs to believe that he's actually competing for the starting shortstop job, even if he isn't. It's an awkward situation -- everyone seems to know Nick Franklin won't be a Mariner on March 31st, but nobody will say it.

While the Mariners have a wonderful surplus at shortstop, they have horrific depth in the outfield. The current batch making up the projected major league roster is a mess - a converted second baseman still learning the outfield, two center fielders better suited for corner spots, and two should-be first basemen with bad knees. If Dustin Ackley reverts back to his poor old self, if Michael Saunders struggles with injury again, if Corey Hart's knees can't handle right field with any regularity, or if Abraham Almonte simply isn't ready, the Mariners will need to do something about it. For all the optimism March brings, the likely scenario is that at least one thing isn't going to work out among this current group. Tacoma currently offers little to zero help, and the first problem will probably be "solved" with Endy Chavez, as it stands now.

That's not good, but there's little else available. Whenever Stefen Romero's defense was brought into question at the preseason press conference, the diplomatic answer was repeated several times by Jack Zduriencik. "He's a hitter." But much like Almonte, his ability to hit major league pitching is in question, so who knows if he can even do that, especially in anything more than a platoon role.

Nick Franklin rumors: Examining a fit with the Mets What about the Yankees? The Rays, too

Nick Franklin could hit major league pitching, at least before he fell off the table. While there's a myriad of explanations as to why his offense fell apart -- poor mechanics, prolonged injury effects, inability to adjust to pitchers adjusting to him -- the talent at the plate is there, and that's a big reason why his pedigree is higher, along with his position scarcity, which is about to go away.

If the Mariners still see a role for Franklin in the organization down the road -- and they should, if they don't deal him -- they need to start giving him reps in the outfield. While the posturing makes sense at this stage in spring training, as the season grows closer, letting Franklin learn the outfield isn't going to have a negative effect on trade negotiations. It indicates to Franklin that the team still wants him in the organization despite their logjam, and other teams will understand that the Mariners are simply doing what they have to do.

Franklin should continue to play shortstop and second base with some regularity, but multiple starts a week in right field seems like a good idea. Tacoma is well-equipped to handle Franklin sliding around -- Carlos Triunfel sticks at shortstop, Ty Kelly plays second, and Nate Tenbrink mans third.  Franklin's greatest defensive asset -- his arm -- would play best in right, and it's the one position Dustin Ackley can't play thanks to his arm, his weakest asset. Franklin could, and should, play left as well, but the possibility for Franklin finding a permanent home in right seems like the best-case scenario. Envision a future where the Mariners are playing three second basemen at three different positions around the field. They've managed to accumulate talent at one of the hardest positions, while failing miserably at developing talent at the easiest.

If the Mariners aren't going to deal Nick Franklin, they have to consider how he can be a part of their organization in the future. While all talk of Franklin changing positions has been dismissed to date, the conversation has to start, and the proper steps need to be taken. Franklin still represents important depth for the Mariners at crucial positions, but he could also represent a corner outfield spot for the future, if given the chance.