Jonah Keri breaks the news that the Mariners have signed Fernando Rodney to a 2 year, $14 million deal. It's not the ideal use of resources, but it's a fair deal for a good player.

The Mariners aren't out of money after all. The noise about the M's being interested in Fernando Rodney turned out to be more than whispers in the wind, and the team has inked the closer to a 2 year, $14 million deal. It's the first free agent closer the team has paid big money for in a good long while.

It's a bit more expensive than would be ideal, but thankfully the price for closers has fallen this year, so it's not bad. Grant Balfour ended up with 2 years, $12 million after his medical woes, so it's not that surprising that Rodney ended up with a million bucks a year more. It's still way under the 2 year, $20 million contract Joe Nathan signed early in the offseason.

Rodney's old, but he hasn't shown any major red flags in recent years - his 2012 was one of the most dominant reliever years ever, and 2013 was still quite good, even though the control went away and a few other things naturally regressed back to earth. Still, Rodney actually gained velocity on his heater, and still managed 1.3 fWAR through 2013. Even if you project Rodney to be closer to 2013 than 2012, he's still fairly likely to be worth his salary for 2014, though he won't be effective forever. He's been worth 3.6 fWAR over the last two years alone, and if he provides just a single win of value for each of the next two years, he'll be worth the deal in terms of straight production to dollars. Both Steamer and Oliver project Rodney for a touch under 1 fWAR in 2014, but still with very good peripherals. I lean a little closer to a full win next year.

Mariners intrigued by archery, in on Fernando Rodney 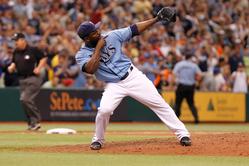 The Mariners may not do anything major, but Fernando Rodney is a good player who costs real money, and apparently the Mariners are into him.

There's definitely the possibility that he outperforms his contract and produces like he did in 2012. Relievers are weird, though. Rodney is more likely than most established relievers to immediately fall apart given his long track record of disappointment before his Tampa Bay breakthrough, and the fact that he's about to turn 37 doesn't help, nor do his occasional Carlos Marmol-like meltdowns of control. There's also the fact that there are greater holes on this team, and it might be better to use resources to acquire those pieces as opposed to spending them on such a volatile player and position. But who knows how that money could be spent?

Relievers are unreliable, especially guys like Fernando Rodney. I imagine he'll provide a lot of roller coaster saves even when he starts with a clean inning. I don't particularly mind. The Mariners need to grab onto some upside if they have a shot of contending in the next two years, and there are few relievers that provide the same kind of upside as what Rodney showed in 2012. Even if it was a fluke year, he was still quite good in 2013, and his chances of repeating something close to that are fairly high. If you missed the full analysis of him from last week, take a look.

In last week's article, I supported a 2 year, $11 million deal for Rodney. It ended up being bit more, but not egregiously so. The deal makes a lot of sense for 2014, but may look questionable in 2015 given what might transpire. If Rodney's lack of control gets worse or the heater starts to die, then his contributions are in question.

For now, the Mariners get a reliever who is pretty likely to provide a win's worth of value for the going rate of a win (~$7 million). The move also helps to solidify a bullpen that struggled mightily last year, and gives the team a ton of upside during the final innings. If - if - Danny Farquhar can repeat his second half and Tom Wilhelmsen can regain his previous form, the Mariners will have three very good late game relievers, and that's not including Yoervis Medina or Charlie Furbush. They'll have to sort out the rest of the roles, but if Oliver Perez  were to return, the Mariners could suddenly go from a terrible bullpen to a very good one. On paper, at least.

Rodney will almost certainly be the closer, which likely moves Danny Farquhar into a relief ace role. Despite Farquhar's second half dominance, his elite swing and miss stuff makes him an ideal candidate to be the fireman of the bullpen, coming in to get the Mariners out of tough situations. It remains to be seen if he has the maturity to handle a role like that, as coming in with runners on base can often be more intimidating than being a closer who gets a clean start to an inning. Even so, the thought of Farquhar coming in to miss some bats with the bases loaded and one out is tantalizing. It could actually end up being ideal, provided that all parties work as they're supposed to, which probably won't happen because stupid relief pitchers.

The Mariners are headed upwards of their 2013 payroll, and there were indications the budget was beyond what it was last year, and that was before new president Kevin Mather indicated that more resources were available. There's still more work to be done and whatever remaining money needs to be spent in other ways, but with so much uncertainty about who's available via trade and who wants to sign here, the Mariners just made themselves a little better and they paid fair market value while doing so. I have a hard time being critical of that. Get ready to catch some arrows.

Another 40-man roster casualty is on the way, and I previewed who's on the chopping block a few weeks ago.