The Mariners and the opposite field

Last week, we took a look at the opposite-field exploits of Mariners outfielder Dustin Ackley. This week, let's expand the scope of our analysis to the whole team... and beyond.

Share All sharing options for: The Mariners and the opposite field

Disclaimer: before reading this article, read this one.

Practically everyone agrees: the Cardinals are baseball's best-run organization. They draft well, they develop well, they know when to keep players around and when to let them go, they do a good job on the free agent market, they rarely lose a trade... and they've won two of the last eight World Series. It's almost infuriating how consistently successful they've been, especially at turning mediocre prospects into terrific players. Oh, Matt Carpenter is a superstar now? Sure, whatever. Makes sense. Cardinals.

About a week ago I was chatting with another (non-LL) baseball blogger, and it was suggested to me that part of the reason for the Cardinals' success has been their decision to target young players who hit the ball hard to the opposite field. I did a little bit of Googling around and couldn't find any articles on the subject. This one, in which Charlie Manuel praises the Cards' opposite-field tendencies and Allen Craig says that he focuses on hitting the ball hard up the middle, came closest. Anyways, I decided that it might be worthwhile to do a little more research, found myself over at Baseball Heat Maps, and somehow got curious about Dustin Ackley. A couple of wires crossed in my brain, and voila: the article linked above was born.

Only, thing is, now that I reread that article it seems a little lacking. Sure, OPPO% is an interesting idea, but it wasn't really fleshed out. What's the league average OPPO%? Does OPPO% actually correlate with offensive success in any measurable way? Do the Cardinals have an unusually high OPPO%? Time to flesh things out a bit.

With this post, I aim to answer one big question and three small questions. The big one: do teams that develop/acquire rookies with strong opposite-field tendencies get more production out of their young players? The small ones: Where do the Mariners rank among teams that develop opposite-field hitters? Are the Cardinals really exceptional in this respect? What is an average OPPO%, and how does it affect our analysis of Dustin Ackley?

Answering these questions, or attempting to, required a lot of legwork. First I compiled a list of all rookies who debuted in 2011, 2012, or 2013 and collected at least 200 PA during that same timespan. I limited the timeframe for two reasons: first, to reduce the amount of data I needed to collect from "bonkers" to "slightly less bonkers", and second, because I was looking for front office philosophies, which can change fairly rapidly. Second, I assigned the listed rookies to the team with which they lost their rookie status - assuming that that team either developed them or targeted them in trade. Third, I identified the handedness of each hitter, splitting switch hitters into their left-handed and right-handed lines. Last, I hit up Baseball Heat Maps' Batted Ball Angle and Distance tool. For left handers, I retrieved the number of fly balls, line drives, and home runs hit to the leftmost third of the outfield (-50 to -15 degrees, >200 ft). For right handers, it was the same operation, but with the rightmost third of the outfield. For all hitters, I collected the average angle of all balls hit further than 150 feet. All that went into a spreadsheet, which you can find here. 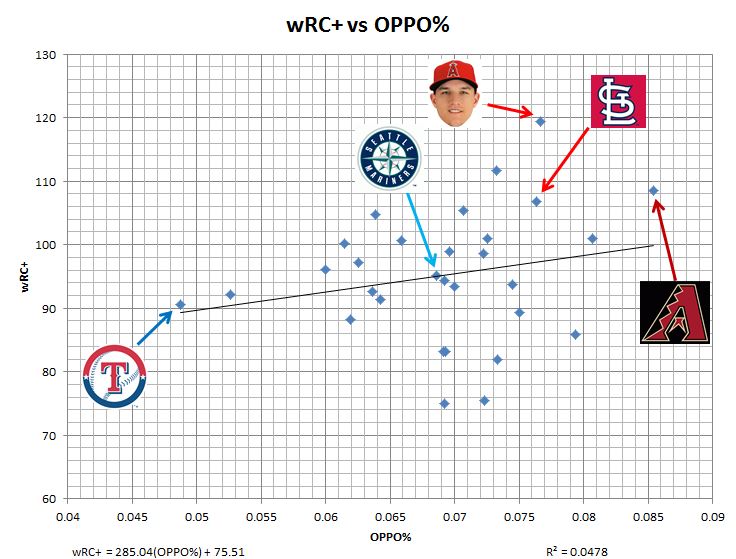 There's a bounty of information that can be mined from the above list and graph (pictures from sportslogos.net and fathead.com). Answers to the aforementioned questions follow.

1) The big question's big answer: ennnh. There's an extremely weak correlation between offensive success and OPPO%. If you break the players out of teams and plot them individually, the correlation improves to an R^2 value of .0663. Interestingly, the offensive metric that OPPO% predicts best is K%, with a still-low R^2 of .0761. My best guess is that those players without the ability to hit the ball the other way frequently have trouble making contact with outside pitches. Of course, it's not an ironclad rule, or there'd be better correlation.

2) The Mariners ranked 21st in young-hitter OPPO%. Among current Mariners, Kyle Seager, Dustin Ackley, and Nick Franklin all have slightly above average OPPO%s, while Brad Miller's is terrible. (Uh-oh?)

3) The Cardinals aren't exceptional in this respect - they clock in at 7.6%, slightly less than one standard deviation above the mean - but they're good. Leading the way is Matt Carpenter and his absurd 10.4% OPPO%.

4) The average OPPO% for young players from 2011-2013 was 7%. That's actually pretty hilarious, because if we compare the average mark to the chunks of Dustin Ackley's career I cut up earlier...

'Course, there's also a lot of stuff to be learned that isn't contained in the above graph and table. First and foremost: OPPO% is a seriously flawed metric. It relies on MLBAM's batted ball distance data, which isn't the most reliable and more notably doesn't park-adjust. The Diamondbacks and Rockies play in parks that inflate batted ball distance, which probably helped them to come in first and third in the OPPO% rankings. The way I divided player PAs up into teams was pretty silly: I probably should've broken up the data further so as to be able to properly assign each PA rather than fumbling around trying to assign whole players. Including veterans might've also illuminated things further, though it would've roughly dectupled the work necessary. Also, in retrospect, 200 feet is a pretty arbitrary endpoint. A better statistic to look at might be the average distance (per plate appearance) of all of a hitter's opposite field line drives and fly balls, which captures not only quantity of contact but quality of contact. Of course, that would require a lot more data than is easily available right now.

1) The Rangers are at the very low end of the scale (right next to the Orioles). However, this might be because they haven't given many plate appearances to rookies lately. Neither, for that matter, have the O's.

3) The OPPO% - wRC+ correlation was helped out a bit by poor Jimmy Paredes, who from the right side of the plate posted both a 1% OPPO% and a -3 wRC+.

4) OPPO% correlates better with BABIP than with ISO.

5) I'm silly for trying to correlate a non-park-adjusted stat (OPPO%) with a park-adjusted one (wRC+). I should really knock that off.

Anyways. This was a pretty interesting adventure - even if it didn't yield exactly the level of detailed results that I was hoping for. I definitely think there's some worthwhile information to be gleaned from hitters' opposite-field batted ball data, and hope that the Mariners (who have access to better data than I do) are checking it out. As for future research in this area...? I may do a little more work along these lines. This is, however, my last time manually harvesting data en masse from Jeff Zimmerman's Batted Ball Distance tool. I love it, but it's really just not suited for this kind of work. Luckily, I'm taking a Python course, and my next major homework assignment is on text harvesting from the internet, which should make my life much easier going forwards.

Feel free to play around with the data in the spreadsheet I linked above. See what conclusions you can reach with it! If you find something cool and interesting, make sure to leave it in the comments below. Have fun!