Questioning the legitimacy of a true position battle at shortstop

Brad Miller is the team's starting shortstop, unless he's not. Nick Franklin is still here, and he isn't going to play any outfield.

Share All sharing options for: Questioning the legitimacy of a true position battle at shortstop

It's really starting to sink in. Robinson Cano is a Seattle Mariner. It feels so strange that I constantly feel the need to verbalize it, but I've been saying it to myself for the past week. The Mariners went out and bought themselves a superstar. The Mariners. You guys. It's real.

But another thing was accepted as a reality all too soon, and that was the fate of Nick Franklin. After Cano signed, Matt wrote that one of Franklin and Ackley would be gone. I agreed, and wrote as much in my series of a thousand articles we published on that insane day. The Mariners suddenly had three capable second basemen, and one of them has been a star there for 9 years, never getting hurt. The quick reaction was a sincere one, rationalizing a surplus that had no other fate.

Yet here we are. The Mariners didn't trade haven't traded either one, and they didn't get enough true outfielders to afford losing Dustin Ackley, who is now projected to start the season in left. While Ackley could get bumped at some point, this team is currently so short on athletic outfielders that his presence on this roster seems inevitable. That leaves Franklin and Miller, who has put on some serious bulk this offseason.

Hardly anybody in informed circles considers Nick Franklin as a realistic option to beat out Brad Miller, except for maybe Franklin himself, who Divish sort-of joked about this morning with me. 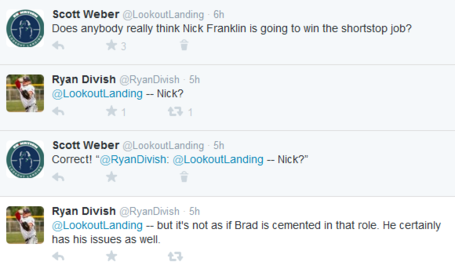 His response got me thinking that maybe Miller doesn't have this as locked down as we all thought he did. It's easy to remember Miller's impressive rookie season that he managed to sustain through the final months, his 1.7 WAR in 71 games, and his 3.6 WAR 2014 Steamer projection. Miller appears to be a very valuable asset, and Franklin appears to be a bigger question mark. It's easy to see consider Miller a better defender because the Mariners kept him at short while moving Franklin to second within a short time frame, but it's also easy to forget just how good Nick Franklin was at the plate before he fell in love with trying to yank bombs to right field.

The Mariners seem to be treating this like a true battle, and so do the players. It doesn't really seem like lip service from Lloyd McClendan either, who has already preached competition as a huge part of the new look Mariners. His recent quotes, via Bob Dutton, are revealing.

Displaced second baseman Nick Franklin will draw some time this spring at his former position, but McClendon reiterated that Franklin should be viewed primarily as a shortstop candidate.

"I think that’s fair to say," McClendon said. "I don’t think he’s in the second base mix."

McClendon also dismissed the idea of Franklin or incumbent shortstop Brad Miller shifting to the outfield.

It seems like if this job was truly Brad Miller's, and the front office was planning on Miller being their shortstop of the future, Franklin would probably get a few reps in the outfield. It wouldn't be outright dismissed. Sorry Lloyd, but the Mariners don't have a crowded outfield, they have a crowded DH pile. Again.

Maybe Franklin in left becomes a possibility further down the line as the Mariners continue their attempts to make a trade, but for now, he's sticking at shortstop for the Mariners this spring, and for all other teams to see. This is what makes me gulp.

I have no problem with Nick Franklin. I actually like him quite a bit, and was excited about his future prospects along playing alongside Miller for the next six years. He's a blast to watch, and his arm strength is an assault rifle compared to Ackley's pop gun. But it's Ackley getting all the cracks in the outfield, not Franklin. Not only are the Mariners relying on two sets of bad knees to cover at least some ground in the corners, they just lost their 4th outfielder and a right-handed bat. Franklin should be getting some reps out in left, unless they're absolutely convinced they can/will trade him, at which point there isn't any point in making him play a position he probably never will in another organization.

It's hard to tell how much is posturing from McClendon and how much is legit. Brad Miller deserves to be the Mariners shortstop in 2014, but if the organization starts paying too much attention to small sample sizes, Franklin could all of a sudden work his way back into the conversation with a hot spring. There's at least some chance that a guy who barely has the lateral range to play second base could be manning short over Miller this year, who proved to be competent there despite his mental gaffes.

I haven't seen enough of Nick Franklin at short to tell you with all certainty that he can't play there, but the crowd-sourcing I've done from people who regularly watch and scout him usually give me the same takeaway -- he's not a shortstop. We already know this organization doesn't really care about defense anymore, but handing Franklin the job over Miller thanks to less than a hundred spring training plate appearances seems like a terrible idea. Miller has the potential to anchor the hardest position to fill for the next six years. Nick Franklin has the potential to hit a lot and lose a ton of his value with his glove. His upside as a shortstop appears to be more capped than Miller's.

It's a tough situation. Encouraging competition is great for both guys. Keep these players hungry for as long as possible, and you never know who is going to go down with injury or get asked for in a trade. I get why McClendon and the Mariners are treating this like a true competition, but deep down I hope that it is not. Miller's the guy at short. Franklin should have been the guy at second, but I've got no complaints about who is now. Robinson Cano is a Mariner, you guys.