Spring training couldn't even offer a glimpse of optimism before it got started.

Spring training has officially started with a resounding thud. First there was the "of course he did" news that Jesus Montero was reporting to camp fat, and now it's been announced that Hisashi Iwakuma suffered a significant injury in the offseason.

Iwakuma diagnosed with a strained tendon in his hand. Won't throw for 4 to 6 weeks.

Iwakuma expected to be ready to rejoin rotation early in regular season.

This one came out of nowhere, and it's terrible news. He seems likely to miss all of the spring training games, and Dutton's tweet seems to indicate that the Mariners don't expect him back until some time in April, or maybe even May. Six weeks of not throwing would put him back on long toss around March 26th, and then he'll have to do the regular amount of ramping up. He's going to miss at least a few starts.

This is the downside to Iwakuma that we all kind of blissfully ignored after his sparkling 2013 - he's been injury prone throughout his professional career, and has never put together back to back healthy seasons - not once. Somehow because that trend occurred in another league, it never seemed real. And so it continues, at the expense of the Mariners.

Finger issues can be tricky, too. It's the middle finger, which obviously affects grip and release. They have a tendency to flare back up, so the team will be extra cautious in bringing him back. Divish later tweeted that Iwakuma won't even touch a baseball for 3 weeks, though I'm not sure what he's going to do with it if he can't throw it for another week or three. Smell it. Rub it. Kick it to Brad Miller.

Every injury is different, and it wouldn't be fair to project another player's recovery cycle and assume it's the same. Players go through varying amounts of setbacks, and Iwakuma's injury may be less severe. I don't know. Adam Eaton suffered the same injury - throwing hand, middle finger - in March 2006, and it took him four months to return. He sucked even worse than usual when he came back, and he had to go back on the DL one more time. On the other hand, Ben Sheets suffered a similar injury in 2007, and he was able to make it back in 6 weeks. The language that the Mariners are using - "hopefully back early in the season" with the season seven weeks away - seems to indicate the severity is closer to the first than the second.

Here's what I feel comfortable surmising:

1. Iwakuma is going to start the season on the DL
2. He could miss a few weeks or he could miss a few months
3. He may not be as effective when he comes back, which is something that was likely to happen anyways with regression

The Mariners now desperately need another starting pitcher. It only takes one injury to the team's assumed rocks for the poor depth to be exposed, and now the team's #2 starting pitcher is suddenly Taijuan Walker, followed by James Paxton, Erasmo Ramirez, and Scott Baker - the last two guys who I might have guessed wouldn't make the rotation if I were asked yesterday. 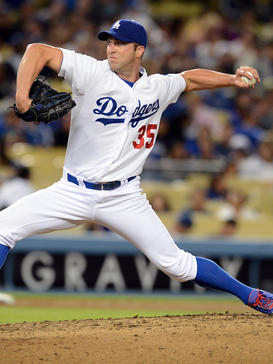 Eric takes a look at Chris Capuano and why he's worth signing.

Maybe there's a silver lining that gets them to pursue a pitcher with their remaining resources instead of Nelson Cruz. Ubaldo Jimenez is still ideal if they want to splash, but a more reasonable option is Chris Capuano, who they should be calling immediately. Capuano will be available for a single year, is wildly underrated, and can easily move to the bullpen if needed. Eric wrote about Capuano in December, and it's worth another read if you missed it the first time. On a budget, it's hard to think of a more perfect fit for this ballclub.

Welcome to baseball season! The Mariners took all of a few hours to toss a wet blanket on the irrational hopes and dreams many of us carry through spring training. With an incomplete offseason and several quality options remaining via trade or free agency, there was a little optimism afforded that this team could possibly put a 2013 Royals-type campaign together. That hope has been soured. It's important that none of us get too carried away with this news, but there's no other way to put it - this sucks. Just how badly remains to be seen.