The historically high strand rate of the 2014 Mariners bullpen

Not many men reached base against the M's bullpen this year and those that did were stranded at a very high rate.

Share All sharing options for: The historically high strand rate of the 2014 Mariners bullpen

I don't know if any of you guys have heard this before, but the Mariners bullpen was pretty good this year.

A quick look at some of their accomplishments in 2014:

I could go on, but you get the idea. The Mariners bullpen was a pretty big deal. Not only did they do a good job of limiting the number of baserunners and runs allowed, they did an exemplary job of stranding those men who were fortunate enough to have found their way on base. In fact, their strand rate (or left-on-base %; LOB%) of 80.7% qualifies as the ninth best strand rate for a bullpen in the live-ball era. (Ninth! Out of 2072 bullpens.)

This probably isn't quite as impressive as it might seem, as the average LOB% over the years has increased significantly (as bullpens have become more specialized and as strike out rates have increased), but it is still a fairly noteworthy accomplishment. For comparison, the second highest strand rate by a Seattle bullpen was 77.8% back in 2001 (which ranks as the 99th best strand rate since 1920), and last year this was a team that ranked last in bullpen strand rate, with an LOB% of 70.1%. 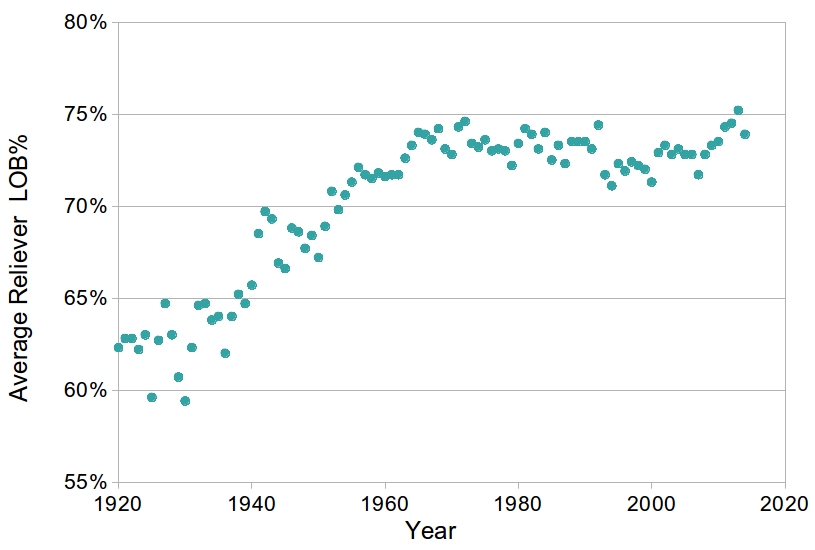 I would be remiss if I didn't point out that strand rate is notoriously variable and that most pitchers who post a LOB% far above (or below) the average generally regress towards a less extreme number as their season/career progresses. (This statistic is much more descriptive than it is predictive.) Nonetheless, the Mariners bullpen posted strand rates well above the league average (which was 73.9% in 2014) for every month this season; their lowest LOB% came in April when it was 76.7%.

But what was it that made this team so proficient at stranding runners? It's hard to say definitively, but we can make some educated guesses. Below is a table of potentially-pertinent data that might help explain what made the M's bullpen particularly good at leaving men on base.

One of the few variables that is generally accepted to dependably increase a pitcher's strand rate is his strike out rate. (A player's ability to comfortably pitch out of the stretch can also be a contributing factor, but that's much harder to measure quantitatively.) With this knowledge, the relatively high K% of the M's bullpen seems likely to be a contributing factor to their high LOB%. This is fairly intuitive; a pitcher that strikes out a lot of batters should be able to extricate himself from sticky situations more easily than his peers. Additionally, by not allowing the opposition to put the ball in play as often, the likelihood that runners will advance into scoring position via "productive outs" is minimized, making it more likely that any potential runners will be stranded.

Moving on to the batted ball data (which doesn't correlate as strongly with strand rate), we see that Mariners relievers had an elevated ground ball rate. Generally, pitchers who give up more ground balls have a tendency to allow more hits; however, these hits do not typically go for extra bases. Again, runners who start out standing on first base are much more likely to be stranded than men who are standing on second or third (assuming that you don't give up a boatload of home runs, which the Mariners were successfully able to avoid doing this year). It should also be noted that the batting average on balls in play against the Mariners is quite low (despite the increased ground ball rate, which should generally lead to a higher BABIP), suggesting that the Mariners relievers benefited from an above-average infield defense. Looking at Fangraphs, the M's infield defense (even with 100+ innings of Kendrys Morales at first base!) was more than 12 runs above average. Finally, the line drive rate of M's relievers was actually significantly higher than the league average. This suggests that the bullpen may have also benefited from a bit o' luck (line drives hit right at fielders) in maintaining such a low LOB%.

All in all, it seems that the Mariners low strand rate seems to have been driven by a delightful combination of luck, skill, and solid defense. While they didn't really excel at anything in particular to generate such a high strand rate, they were good at just about everything.

In 2014, the Mariners bullpen gave us something very valuable: relative piece of mind. Once a game was in the hands of the M's relievers, they probably weren’t going to allow very many men to reach base. And if they did, those men probably weren't going to score. In past years, there's been somewhat of a feeling of gloomy fatalism that the Mariners were doomed to defeat once an opposing runner reached base late in a close game; that feeling (for me, at least) was largely diminished this year, and for good reason. Although most of us liked to joke about the Fernando Rodney Experience, and how our closer has a propensity to "always" make the ninth inning "interesting", Rodney is actually a pretty good pitcher who had a good season, and the rest of the bullpen followed suit. There were no black holes in the M's relief corps this year, which made it much easier for Lloyd to mix and match as he saw fit and employ a quick hook whenever it was necessary. All of these things came together to help produce a very high strand rate for this team's bullpen.

Looking forward to next year, it's tempting to get (overly) excited about what the Mariners group of relievers might look like in 2015 (with a full year of Brandon Maurer! And Carson Smith!). They could be even better than they were this year! This is true, but it is important to remember that relief pitching is one of the single most volatile components of baseball, especially when a good deal of a team's success can be tied to a low strand rate. Although the Mariners bullpen appears to be one of their strengths, it is far from a given that they will continue to improve going forward. That being said, go ahead and appreciate the hell out of how good they were this year. There were lots of bright spots about the Mariners in 2014, but the performance of their bullpen was definitely one of the brightest.