A point of clarification on Michael Pineda, and the injury that overshadows the trade

Would Michael Pineda have gotten hurt had he stayed in Seattle? I don't know, but I wonder.

Share All sharing options for: A point of clarification on Michael Pineda, and the injury that overshadows the trade

Here's a fun game to play with articles written by national reporters: among the vast multitude of content that's pure speculation, reporting work that's already out there elsewhere or just plain filler, find the sentence or two in the piece that happens to be purely original. Or, in lieu of that, find the obvious fact that at least has now has a bit of sourcing behind it.

In Jon Heyman's article Tuesday on the Mariners still pursuing additional pieces—and bless him for finding something to write about in the dog days of this offseason—I found a comment that momentarily caught my attention: "insiders say Zduriencik remains a fan of Smoak."

It’s no surprise that Jack Zduriencik may hold some unwarranted love for Justin Smoak, given that his acquisition was one of the most high-profile moves of Z’s tenure; yet, it was still interesting to hear it at least somewhat-sourced.

But what’s always made me smirk is how quickly hypotheticals were wiped out following that trade. Sure, Zduriencik still wants Smoak to do well, but he could've had considerably more riding on him.

The day the deal went down it was widely known that, at the last second, the Mariners chose Justin Smoak over Jesus Montero. It felt rare, somewhat bizarre, to know that very moment we would be able to measure Smoak’s production against someone else’s, someone else who could’ve been a Mariner instead. For the rest of his career, Smoak would be measured against Montero.

But then, just six months later, Zduriencik had Montero too. And you’d think that'd open another range of hypotheticals but then, of course, Michael Pineda blew out his shoulder.

So the long string of "what if"s seemed to close. It didn’t happen in a good way, but Mariners fans look back and think "well, at least it was a disaster for everyone." The Mariners received a massive bust and, unless Pineda overcomes one of the most serious injuries in the game of baseball, only gave up one too.

But this theory, this "Welp, Pineda would’ve gotten hurt anyway" notion is one I’ve—if not taken issue with—at least wondered about. I don’t know why I’m writing about it now, other than that I’ve always meant to write about it, and with the Mariners still needing quality pitching, I figured I might as well get it done.

I believe the trade, and the environment Pineda was thrust into, played some role in his devastating injury. Here's why.

So yes, the Mariners traded Michael Pineda in January of 2012. Just three months later, his career was in jeopardy. How’d that happen?

For anyone who was tracking the Mariners closely at the time, it’s hard to forget how the trade went down. It’s the deal that for me cements the "this front office just doesn’t have leaks" notion, because—despite being the biggest trade of the off-season, and one of the biggest one-for-ones in recent memory—it was rumored for all of 20 minutes, and then it was done.

To make the deal official, Pineda of course had to take a physical. And as part of that physical, he had an MRI—an MRI that came back clean. It didn’t show any problems with his shoulder. You’d think this would rebuke the "damaged goods" notion, but Kyle Boddy of Driveline Baseball raises an interesting point on MRIs and pitchers’ shoulders:

The problem is that people view an MRI as a diagnostic panacea, when it’s barely a baseline tool for analysis. When you consider the torque about the shoulder that’s required to throw a baseball 90+ MPH and how often it’s done, there’s no way you wouldn’t expect massive structural changes in the connective tissue in the glenohumeral and acromioclavicular joints – and this is exactly what you see. Consider that MRIs of the shoulder in asymptomatic (completely healthy) pitchers are really screwed up (source 1, source 2), and you’ll begin to understand that the initial MRI is more of a formality than anything else. Unless the Yankees had seen a complete tearing of the labrum off the bone, they wouldn’t fail Pineda based on a wonky MRI.

And it's the couple months of development here that I've always wondered about, but not in the same way.

Michael Pineda reported to camp with the Yankees 10-20 pounds overweight, and it was immediately made well-known. On the day of his first Spring Training start, the big story was that there was no guarantee he'd be handed a rotation spot and he'd have to come in and compete, lest he end up in Triple-A.

In the New York Post's account of the narrative, Freddy Garcia offered some on-point and foreshadowing comments

"Last year, nobody knew him,’’ said veteran righty Freddy Garcia, who dresses next to Pineda in the George M. Steinbrenner Field clubhouse. "This year, he has to prove how good he is. He has been relaxed so far, and confident. You have to be confident and show people you can play. He asks a lot of questions. He is excited, hopefully he shows what he has got.’’

According to Garcia, who also has pitched in Seattle and The Bronx, Pineda was a bit overwhelmed by how the media reacts to every breath from the Yankees.

"The difference between Seattle and New York is the media," Garcia said. "The first time he came here it was ‘Wow.’ In Seattle spring training there were two or three guys and sometimes they didn’t ask questions.’’

I'm not a genuine member of the Seattle media, but I was fortunate enough to attend their recent media luncheon—and there were more than two or three guys there. That said, there's some truth to this; there really are only two or three print beat guys now, and I did think it was funny when Lloyd McClendon concluded his session at the event with "Man, you guys are easy."

I digress, but with a purpose. Anyway, back to Pineda. 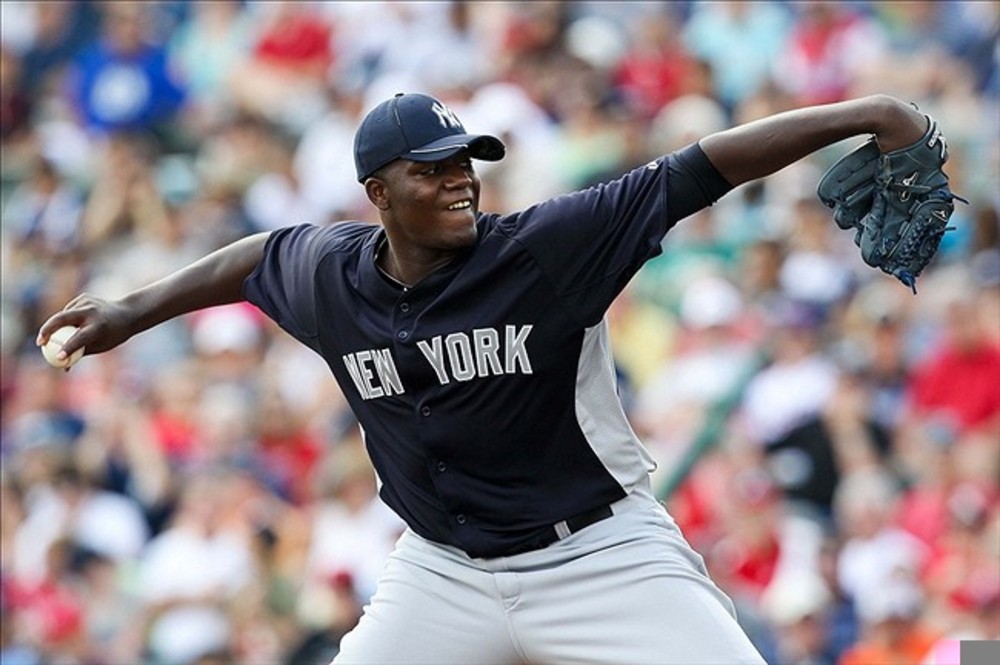 He "shined" in that first Spring Training start, as far as results go, but a big side-story took shape that day:

It was the story that wouldn't go away. In the second start, he topped out at 93. It was better, yes, but still well below his max speed in 2011. But, of course, it was Spring Training. Even the aforementioned Hardball Talk post concludes with "This whole velocity situation will probably be a non-issue before long."

Of course, it wasn't.

In his third start, he sat mostly between 90-92mph with his fastball. In his fourth start, it finally spiked at 94mph, and it did again in his fifth.

After that fifth one, Pineda said "I have more" and that "Nobody throws hard in spring training...because it’s spring training. You work on what you need to." Still, he was proud of what he'd managed to do: "I had a good fastball," he said. "To get 93, 94 is not easy."

After working his way up 94mph, under constant speculation and scrutiny for not throwing harder, he was shelled by the Phillies in his next Spring Training start and left the mound after 2 and 2/3rds to a chorus of boos. He complained of soreness afterwards. But there was more to it:

Huh, I wonder why he didn't tell anyone. Pineda would get an MRI the morning following that start and—almost unbelievably now, it came back mostly clean—revealing only a bit of tendinitis. It was much better than what was feared, and he'd only hit the disabled list.

"I'm pitching this year," Pineda vowed at the time. "I'm coming back strong."

That wasn't the case. Pineda threw only fifteen pitches in his first rehab start following the DL stint, and a special dye-cast MRI would reveal that he had a torn labrum.

In speaking on the matter, Yankees General Manager Brian Cashman said it's possible the regular MRIs may have failed to reveal an issue that might've laid dormant, but he did say "The belief is that, without a doubt, the injury occurred during that rehab outing" and that before the rehab outing, Pineda "tested out strong as a bull, and his bullpen sessions were tremendous."

In speaking himself on when the injury occurred, Michael Pineda said:

"I think the first time (I felt something was) my last start in spring training. I tried to throw hard and I felt pain in my shoulder," Pineda said. "I rested for a couple days and then when I started to play catch again I was feeling really good. But when I threw hard again I could feel pain again."

Was Michael Pineda a perfect model of health when he was traded from Seattle to New York? No, probably not. All pitchers, and certainly pitchers like Pineda, carry a level of risk. But did this have to happen, the torn labrum? Would it have been as likely if Pineda had never been traded, and instead continued to play in the lax Seattle market? I don't think so.

Look at everything that happened above, the overbearing pressure to throw as hard as possible in Spring Training. You can see it in Pineda's own quotes that he wanted to please the fans—and they booed him off the mound when he tried to pitch through pain in a meaningless start.

The counter to the argument that the New York market, and the pressure that came with it might've played a role, is that Pineda was in decline during the second half of 2011. He did, and yes, the fastball velocity did decline as the year went on, but Mariners bloggers noted that Pineda could still ramp it up when he wanted to. It was the truth, too

Though the very last start of his season, on chilly day in Minnesota, was a different story, Pineda dominated in his second-to-last outing of 2011. He struck out eight over eight innings and, by my count, threw 26 fastballs 95mph and above.

So what's the point to all of this?

We don't know what would've happened had Michael Pineda stayed a Seattle Mariner. It took too many words to state the obvious, but the potential Pineda once had here is something we too-often overlook. The trade was good at the time, for both sides, but Pineda was thrust into a situation that only increased the likelihood of injury.

In the broader sense—sure, it would be nice to have Pineda slotted in as the #3 this team desperately needs, but we don't know what the team would've looked like if he were still around.

And, of course, Michael Pineda's career is not over, though that was certainly the fear at the time. At least, there was concern he'd never be the same. We still don't know how likely it is that he will, but he's battling, and he'll report to Yankees camp two weeks from tomorrow and vie for a rotation spot.

I hope we get to see Michael Pineda dominate once again, because it was so fun when he did it here. And though it's painful to do so, it's fun to imagine that, in some alternate universe, he's still it for the Mariners.