Yeah, neither do I

When news broke that the Mariners had offered minor-league contracts and spring training invites to relievers Joe Beimel and Logan Kensing, the collected response seemed to be something between "oh yeah, spring training is coming up" and "oh shit, the bullpen thing." I tended toward the latter, because while I'm excited to see a Robinson Cano shirsey in the Mariners team store this year, I'm not entirely ecstatic to watch a bullpen possibly similar to the one that had 2013's second highest ERA, third highest walks, fourth highest losses, and a league-average fWAR that was probably only because of Danny Farquhar.

What does this bullpen tentatively look like going into spring training? Let's take a peek:

Almost assuredly guaranteed to break camp with the team:

Alright, we know the whole Danny Hultzen thing by heart now, but remember Stephen Pryor? Remember that 100 mph first-pitch fastball in his debut game against Paul Konerko? His 7 1/3 scoreless innings to begin his 2013 season? Then his explosion and total disappearance? It's convenient for that previously mentioned awful-bullpen narrative, which certainly ended the year on a sobering note, but it's not as if that was the singular result of poor process and bad planning. I mean there's the depth thing, sure. But look--it's very easy for a roleplayer to descend into the shadowy fogs of forgetfulness with a season ending injury, especially when said player is a) still under team control, b) cheap, and c) not entirely devoid of value.

It would be useless to look at the statistics from Pryor's seven games in the bigs last year--his 1.55 FIP, 0 ERA, 8.59 K/9 rate--because well, seven games. But just look at this: 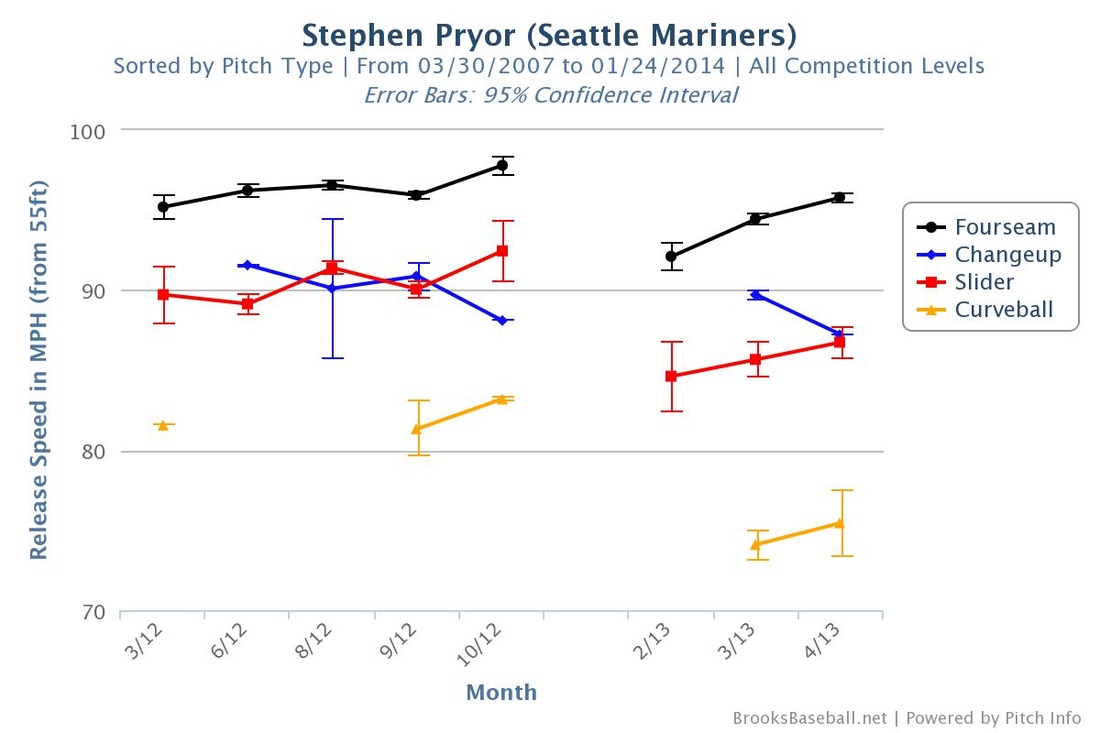 It seems pretty clear that something was wrong with Pryor throughout the earliest parts of 2013, even with his SSS success with about a 10 mph loss on every pitch he has (or he just started off really, really slow in ST). Still, he managed to bring his possibly broken velocity up still before his injury, and holy crap that gap between his curveball and his fastball. This is scary stuff that could be incredible if cultivated...of course...with a healthy arm.

Now Pryor spent the first half of 2013 on the DL and tried to come back with a few games in the minors before realizing he needed surgery, which not only ended his 2013 season, but according to team trainer Rob Nodine, could keep him out for "several months" of 2014. Yikes.

Even scarier is that according to Nodine, through Greg Johns, Pryor's surgery on his torn latissimus dorsi muscle is only the fourth surgery of its kind in baseball history. This is even more terrifying than he upside to that chart above, but from the sounds of it, the Mariners *award winning* training staff is taking all the necessary precautions to ensure a healthy and full recovery.

Which is big--because even if the Mariners break camp with a jack-in-the-box bullpen again, it's easy to forget they've got some, well, hopeful guns stashed away for safekeeping. It will obviously remain to be seen if Pryor can pick back up where he left off, but if he can, then the Mariners just may be able to peel off that gross bandaid they are wearing right now. Pryor may yet prove to be a valuable bullpen addition in, say, July, so don't get too upset when the Mariners break camp with Yoervis Medina and Hector Noesi in long relief.

They might be fixing Stephen Pryor. And here is where I won't talk about Danny Hultzen.