Battling injuries over the past three campaigns, Franklin Gutierrez continues to confound the mind, this time with his bat.

Share All sharing options for: Franklin Gutierrez: Silver Slugger, Not So Fast

I get it. I do. For the most part, the public is not optimistic of Franklin Gutierrez returning to Seattle. Totaling 173 games of Major League service dating back three seasons, the outfielder has encountered little opportunity to enhance his profile over recent years. Historically for Gutierrez, health is paramount to success with value coming from his legs and glove as well as his bat.

There was a 'Fanpost' at Lookout Landing a few weeks back that speculated to the value of Franklin's glove this upcoming season. Based namely on defensive value -- in relation to fellow 'elite center fielders' into their age 30-31 season -- the conclusion is drawn that his glove, once gold, has historical support in not straying far in 2014. As the piece continues on to tease whether Gutierrez was healthy for the majority of this data, it gave me an idea. The draw for Gutierrez has always been his glove, but what of offensive value? 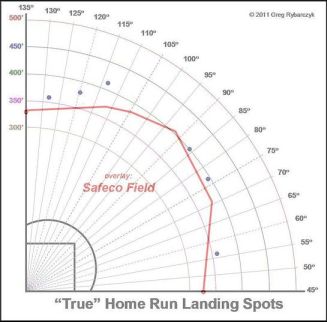 In 2013, Gutierrez finished 14th across Major League Baseball in HR/FB (home runs/fly balls) at 22.7% (min. 150 plate appearances). In recognizing the sample size, the numbers above equal a home run each 14.5 at-bats or 16.9 fewer than his most productive slugging season (2009) in Seattle to date.

Pandering to the future, the portion of the above metrics that came within newly renovated Safeco Field is cause for optimism.

Last season marked the first in which Gutierrez hit a larger stake than 50% of his home runs in Safeco Field. Chalk it up to what you will, but of the six, two left over the renovated 8-foot wall height in left field and a third near the stadium's most drastically edited dimensions in left-center field. With an average distance of 385 feet -- hardly 'no-doubter' distance -- the outfielder looked at home in Seattle this past season.

However -- knowing this club takes the field at home much of the next season -- beware in mailing Gutierrez a Silver Slugger award prematurely. His past season was not all roses as it may appear.

Like most things related to the Venezuelan born outfielder, this is a real brain teaser.

Upon first glance, the above production -- seen at the Major League level none the less -- is pretty nifty. But as you look closer, the numbers begin to confound one another. Offering at a similar data-set of pitches seen during his tenure in Triple-A, Gutierrez posted a HR/FB ratio just one-fourth the equal of his Major League performance, cutting his slugging production in half.

Whats more -- in reaching the Major League production displayed in the table above -- Gutierrez batted 26 ticks (.267) better than his career average (.241) versus RHP (right-handed pitching) and 51 ticks better than his .216 number of the same season in Triple-A. Metrics that only further jumble what was truly an upside down season for the former Gold Glove winner.

Confounding, outlying numbers are not the only battle Gutierrez faces moving forward. In line with his tumultuous past, Seattle has become increasingly reluctant to run the oft-injured outfielder, stealing on just 5.8% of stolen base opportunities (6/104) the past two seasons. Handcuffed in producing with his legs, it becomes crucial in the investment of a roster, lineup designation moving forward that Gutierrez generates productive at-bats off pitchers on either side of the mound.

Self-admittedly not able to be forecast as available on a day-in day-out basis -- although it's nobody's ideal scenario given the outfielders early contributions in Seattle -- Gutierrez may be asked to take a reduced role next season, even more significant than that of last season while healthy. With an established, productive track record versus left-handed pitching (.287/.344/.474), he could remain the organization's answer opposite southpaws, turning to an external, market driven search to account for remaining contests.

Such an acquisition could be used to address the inexperience of this current outfield group, while providing -- as mentioned above -- insurance, relief for the enigma that is Franklin Gutierrez.