With Spring Training just around the corner, it's about that time for teams to start weeding through the leftover pile in order to fill up the seats on the bus to Peoria. And while the Mariners had already extended invites to about 19 warm bodies earlier in the week, it seemed to be only a matter of time until they added some veteran names to a list mostly filled with young, inexperienced guys dreaming of their first cup of coffee. So sure enough, according to Tim Brown of Yahoo! Sports and Chris Cotillo of SB Nation, the Mariners will be adding LHP Joe Biemel, RHP Logan Kensing, and catcher Manny Pina to the pile this March.

Joe Beimel is trying to make his comeback after undergoing Tommy John surgery after Spring Training with the Rangers in 2012, having previously appeared for the Pirates, Dodgers, Rays, and Rockies. He hasn't played in an MLB game since 2011, however, and while scouts claim his velocity has returned now that he has fully recovered from surgery, he wasn't much to write home about before his elbow broke:

These numbers from spring training in 2012 should make it patently obvious why he needed surgery--a huge drop in velocity from his fall 2011 velocity. But look at what came before. He has four pitches--only two of which are offspeed--and hasn't averaged 90 on his fastball since 2008. I don't blame the Mariners for taking a gamble on another lefty, especially with Oliver Perez most likely out the door, but unless his velocity somehow regenerates back to 2006 and he can find another pitch, then this seems a bit silly for anything beyond spring training. Which, is possibly the point entirely. 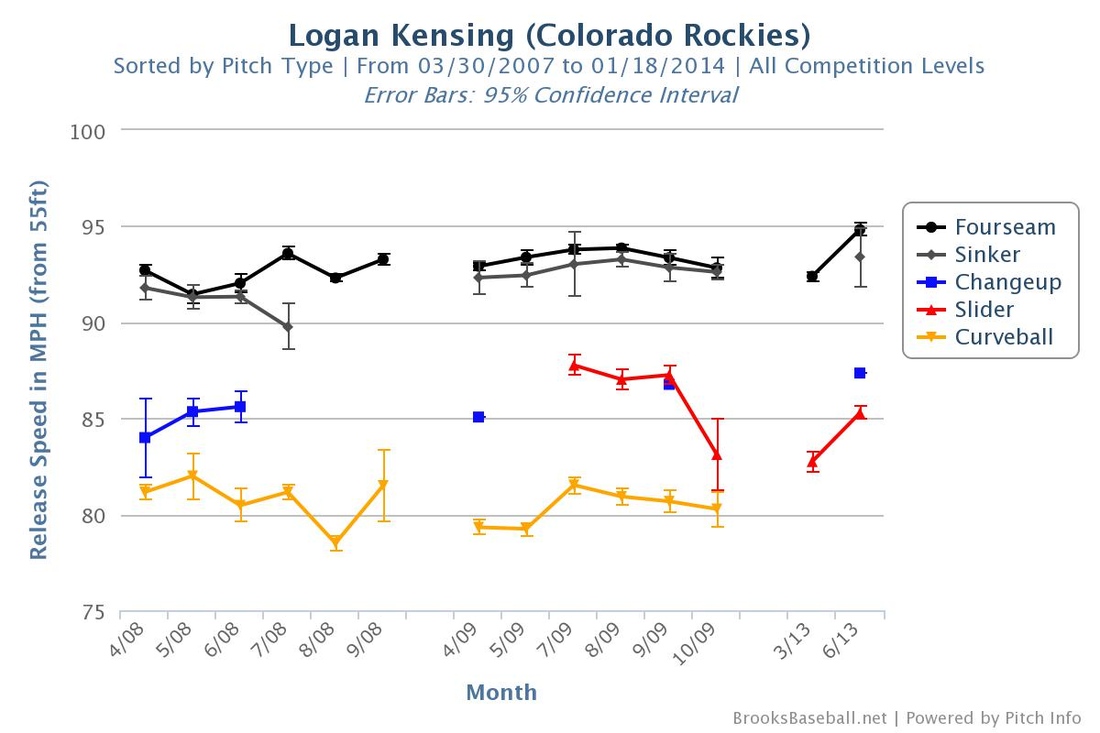 Logan Kensing, on the other hand, is a bit of an enigma. The righty made his MLB debut in 2004 as a starter with the Marlins, and has spent the last ten years around the minors trying to figure his thing out. The Marlins finally gave up on him in 2008, and after sitting out 2010 with shoulder surgeries, he was picked up by the Pirates and sent to high A, where he dropped his curveball altogether and saw a 2 mph increase on just about all of his pitches. Just look at that break between 2009 and 2013 in the chart above, and what came after, even through the course of the 2013 season. It was enough to earn him a September call-up with the Rockies last year, and now obviously a call from the Mariners.

Lastly, we have catcher Manny Pina, who has seen five Major League games in an eight-year career, hitting .242/.287/.384 for the Royals' AAA franchise last year. I could write a few things about Pina, but the reality is that the Mariners need catchers to bring with them to Arizona so their pitchers can throw baseballs at people instead of brick walls. Also they need those obnoxious SS games to have full staffs on either side. This is probably the last thing we will hear about Manny Pina.

All in all, it brings the M's non-roster invitee list to 22 names, still absent one D.J. Petersen, who either still doesn't have a jaw or did something to piss off a higher up in the organization. I don't quite get it, but then again, I don't get why I'm going to be watching Hector Noesi pitch in a month, so I guess you get what you get. Here's the updated list, and don't forget to check out the 2014 Spring Training schedule here.