At 23 years-old, Erasmo Ramirez battles alongside his peers, not behind them.

Often labeled small in stature, hailing from a nation in which active Major League contributors can be inventoried on one hand, Nicaraguan born Erasmo Ramirez hardly possesses a Major League Baseball profile that catches the eye. Paired with perceived struggles to stay on the field -- and of more recently, performance when on the field -- the right-hander faces mounting scrutiny, growing opinions that his arm is not a solution for Seattle's rotation moving forward.

In reality, it's the illusion provided Ramirez' service time in professional baseball that leads to much of the negativity surrounding his 'development'. Five months the junior of 2013 Tacoma Rainiers teammate Danny Hultzen, Ramirez was the youngest player on an American League roster Opening Day 2012 and a mere four days older than the youngest overall player, Jose Altuve. Despite agreeing to professional baseball terms during the 2007 Major League season, Ramirez remains on a timeline similar to his peers. In that capacity, fighting a battle not unlike that of which many pitchers his age face in transitioning to Major League Baseball, a struggle relevant to pitch execution and location. What do I mean? Take a look: 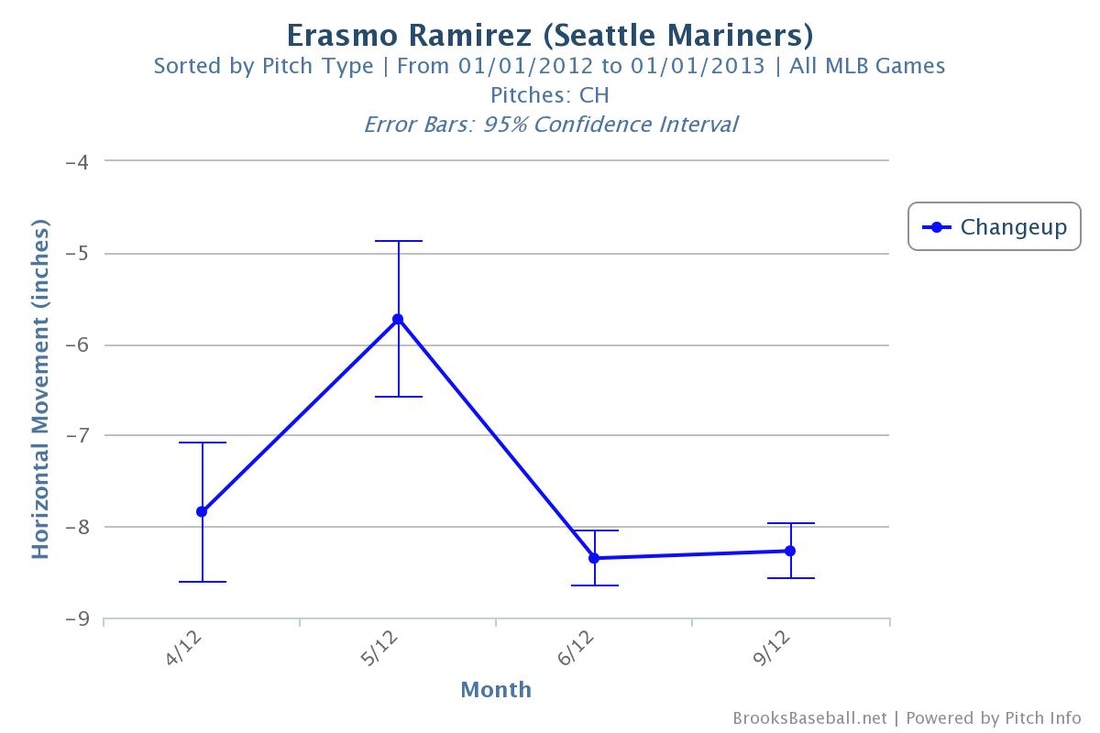 In part to the horizontal movement attributed above, Ramirez posted the tenth most valuable change-up in relation to runs above average (wCH) -- at 6.2 -- among 107 pitchers aged 20-26 to throw that pitch across Major League Baseball in 2012 (min. 50 IP). 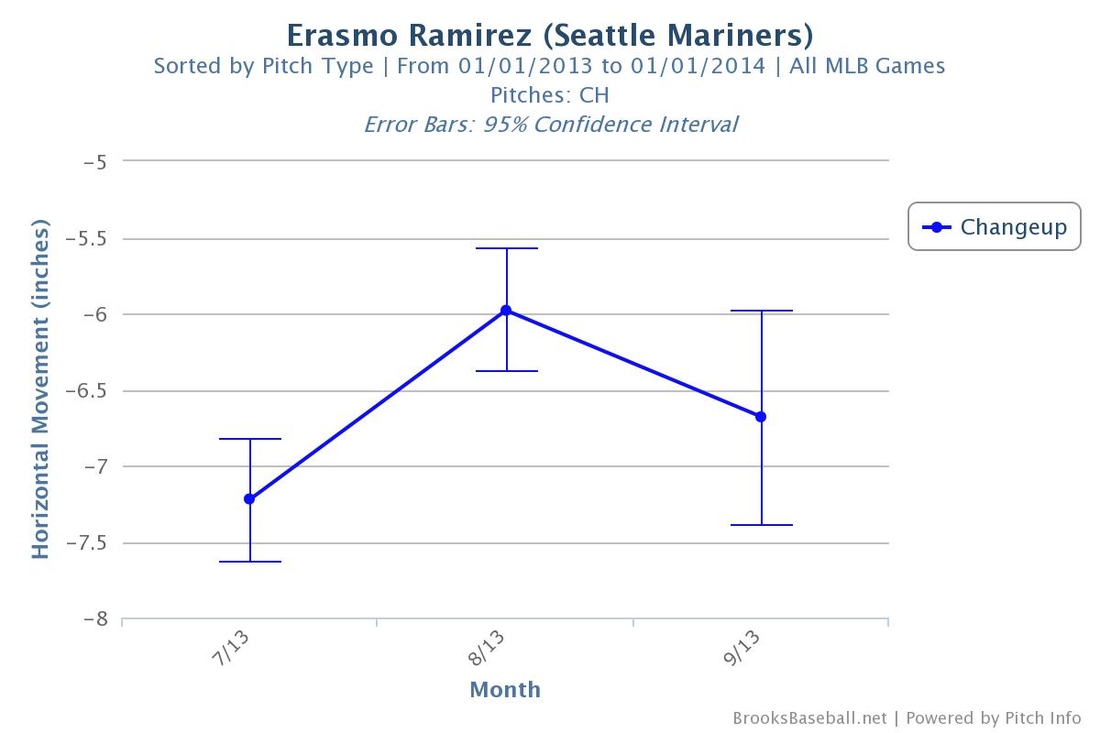 Based on the same criteria as above -- Ramirez capped his Major League service in 2013 ranked 62 of 116 arms registering a wCH (-0.7). In addition, losing 1.1" of horizontal movement on that same pitch. In correlation to the above differentiating movement between seasons, Ramirez also saw a decline in his slider value related to runs above average (wSL), from 3.1 in 2012 to -1.3 in 2013.

Ramirez effectively handcuffed his most recent Major League effort, registering an -11.3 decline in change-up/slider value in relation to runs above average from the previous campaign. Void of an overpowering fastball -- similar to Ramirez -- while drawing the majority of pitch type value from a change-up/slider combination, take a look at three other arms that experienced season to season regression in the opening years of their Major League designation.

**Metrics above relevant to +/- over years listed

The following season, all three pitchers recovered from their dip in pitch effectiveness, registering positive value in these same offerings.

**Metrics above relevant to +/- over years listed

Without the ability to travel back in time, Ramirez has taken the next best step. He's moved on. In an interview with Lara de Cardenales commentator Alfonso Saer Jr. from the Venezuelan Winter League, Ramirez cited, "'The secret in my most recent openings has been to always remain in favorable counts and use my best pitches.". Of that pitch, Ramirez continued, "My main pitch has been the change. Fortunately I have had control over it and I have managed to combine it with the rest of my releases."

Entering his final VWL (Venezuelan Winter League) outing, Ramirez carried a mark of 3-0 alongside a 0.69 ERA. In the same interview as above, when referred to as the top pitcher in the 2013 Venezuelan Winter League, Ramirez responded, "This designation is not a weight for me, rather it gives me greater confidence to do better in each opening."

Much akin to the illusion cast in Ramirez' service time, the perception that Ramirez has struggled to stay on the field is, for the most part, an inaccurate portrayal. In traveling between Triple-A Tacoma and Seattle, the 23 year-old product of Nicaragua has tossed 262.2 innings dating to 2012, trailing highly-regarded fellow Seattle arms Brandon Maurer (274.1) and James Paxton (275.3) by the most minimal of amounts.

"This designation is not a weight for me, rather it gives me greater confidence to do better in each opening." -Erasmo Ramirez on being named the Venezuelan Winter League's top pitcher via Alfonso Saer Jr.

In talking with myself -- separate of his interview with Ramirez -- Saer Jr. referred to his slider as "a viable ground ball, strikeout tool", citing noticeable dedication to throwing and executing that pitch often this most recent Winter League season.

Continuing into his seventh campaign as a member of the Seattle Mariners organization, do not be tricked, Ramirez is not broken. More accurately, he's a 23 year-old, developing arm. Do not write him off.