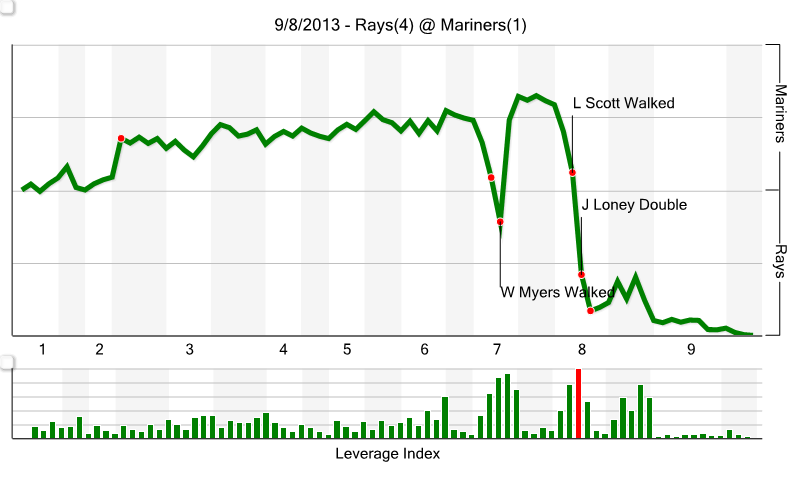 The first NFL Sunday of the year always feels like the exact moment the MLB's regular season dies. The newswire is filled with football talk. You have to cycle through what feels like ninety-seven NFL games on your TV guide before finding your local baseball team. Pundits forget about any team that isn't in the playoff hunt, and suddenly there are two distinct flavors of baseball being played: the playoffs, and games featuring a Hector Noesi.

Baseball has long been used as a metaphor for whatever our culture demands from it. Throughout the ages it has been everything from a mental escape from national hardship to a boxing ring for the racial problems America took too long to figure out. The entire first episode of Ken Burns' Baseball documentary spends about twelve minutes talking about John McGraw and Albert Goodwill Spalding, and then it's an hour and a half of poets and writers and Billy Crystal talking about how baseball is like dying leaves in winter, and you think alright, this may be getting a little out of hand. Sometimes things we like don't have to be grand metaphysical stand-ins for the abstract concepts we have difficulty understanding. Sometimes baseball is just a game of baseball.

But after watching today's game, I think they might have been onto something. Baseball really is about time. The passage of time between seasons, time from life to death. Time without a game clock. Time between the first game of the season and the last game of the season, filled with the same faces now darker under the heat of a summer's sun. Filled with the same obnoxious faces you saw in March that still haven't figured out how to play baseball, while they still wear your team's uniform.

I anxiously awaited the first day of spring training, listening to the game live on my iPhone at school. It was February 22nd, and the Mariners were going to open 2013 baseball with Hector Noesi taking the mound. He threw 42 pitches in the first inning and was pulled after giving up 6 runs. It was rainy that day, but it was starting to get a little warmer. I missed baseball a lot--too much, really, and for some insane reason I kept listening to that game because it was the first baseball game in around four months. Baseball was back. I was ecstatic.

Today, as the regular season felt deader than it has ever been with the arrival of football, Hector Noesi was on the mound pitching in the 9th inning after Yoervis Medina and Oliver Perez gave up 2 to let the Rays go ahead in the eighth. I wasn't ecstatic. I knew what was happening. See, fall is on the way--the leaves are falling, and the days are starting to get shorter. Hector Noesi opened and is helping close 2013 Mariners baseball, and this is a sentence that is kind of difficult to type.

They really only threatened twice: once in the third, after Brad Miller singled to lead off the inning and was moved to second on a sac bunt from Almonte. Kendrys walked and the runners moved up on a wild pitch, but Guti struck out to end the inning. Then in the eighth, a set of walks from Almonte and Morales (who was replaced on the paths by Endy Chavez) was sent back to the dugout with a pinch hit strikeout from Raul Ibanez.

I can see why Wedge put in Ibanez here- he was facing a right hander in Joel Peralta and Raul Ibanez has a bunch of home runs, so it would have been an emotionally exciting moment for both the score of the game and Raul's chase of Ted Williams' age 41 home run record. And besides, he did that thing in New York last year. But everyone knew what Raul was trying to do. So did Joel Peralta. 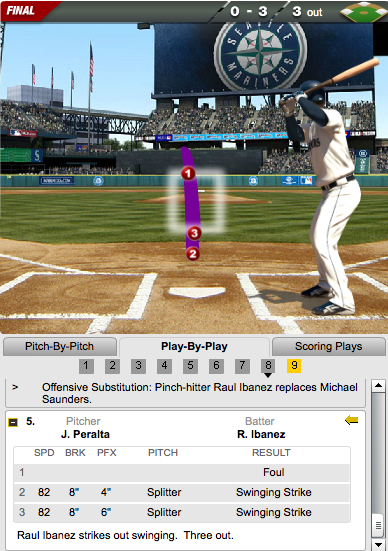 Welp. I'm one step away from being convinced that this home run record thing is factoring into Wedge's managerial decisions with Raul. It's the only reason that makes sense for how much he has been playing almost every day since getting a little hot last week. I know he pulled Saunders for the platoon split too, but come on. Earlier in the year, when defending sitting Michael Saunders as much as they were, Wedge made a comment to the extent of we know what we have in Saunders, so he's going to sit while we see what the other guys can do. While the logic of that seems a bit silly, guess what: you guys now have a bunch of outfielders trying to make a case to play next year, including Gutierrez, who I'm sure wants to show what he can still do. But instead, Raul's name keeps coming up. There's only one reason this is happening.

I'm not even really that upset about it. I would love to see Safeco's all-time home run holder break a record set by Ted Williams. I love the guy. I love his personality. He even sat to start today's game, so I'm not sure what I'm complaining about. Just hurry up and break that record, Raul. For all of us.

In other news, Erasmo had himself another Erasmo game. His command was a lot better today, which has been nagging him all season like a lingering cough, but he still ended up walking 4 batters. Two of his walks came toward the end of his outing, as he was getting tired. He only generated 23% of his hits for ground balls though, and lucked into some good defense. Still, he struck out 5 and never got in over his head, which is about what we have come to expect from the guy. No runs, no dingers. Erasmo is still a work in progress, but he's showing signs of what could be a pretty solid deep rotation starter.

But the bullpen--oh the bullpen. I'm so tired of talking about the bullpen. After Charlie Furbush came into the seventh and loaded the bases, he got Delmon Young to ground into a double play, and escaped the inning with a Ben Zobrist flyout. And then, Yoervis Medina. Two walks, RBI double to James Loney. And then, Oliver Perez, who started off erratic, giving up an RBI single to Sean Rodriguez before settling down. And then, Hector Noesi, which yeah I already gave him enough words today.

After the game, ROOT was interviewing pitching coach Carl Willis. Willis talked about how the bullpen "can't be giving up runs" late in 1-0 games. They just need to be better than that. I once worked at a retail music store, and I had a boss who was probably one of the best guitar players I had ever seen, but really seemed to have little idea how to manage a nationally franchised music store owned by a giant private corporation with an evil sounding name. When our store would fall short in monthly sales reports, we would have impromptu meetings, the employees sitting gathered on piano benches and sitting cross legged on the floor as he flipped through printed pages of numbers like a cop reading a rap sheet in some detective movie. He would sigh, and wipe his brow before saying You guys, we just have to be better than this. We can't have numbers like this. I have no idea what Carl Willis actually does, if he's a good pitching coach or not, or even what an alternative would be. But when I hear that sentiment coming from someone in a position of authority, I always cringe. Every time.

So the Mariners have ushered in the harsh reality of fall with a 4-1 loss to the Tampa Bay Rays, failing to sweep the series. Even if they had, what would we be saying today? There are 19 games of baseball left to be played, and we still get another Taijuan Walker. As full of old man sentiment those narrative-weavers all so often give to baseball, they might be onto something with this. I'm only thankful one other day out of the year, you know.

1. Will you be watching football this year?

2. How do you typically spend your baseball offseason?

4. Would you still follow the Mariners if you moved out of the area (or if you already have!)?