Iwakuma pitched a few great innings, but it was a few late, decicive errors from the Rays that gave the Mariners the victory for the night, as they defeated the Tampa Bay Rays 6-4 Friday night.

So the Mariners won today, and it was a crazy game. Lead changes, dingers, back and forths and traded hits until an eventual 6-4 victory. What exactly happened?

Kurt Vonnegut wrote his college thesis on graphing stories along an x/y axis, tracing plot and development on a linear, physical scale. A bunch of people balked at it, thinking it was foolish. Many refused to accept it. But they look a lot like some of our win expectancy charts, telling a story by graphing each event on a linear axis, pitch by pitch, moment by moment, to tell a story that moves from right to left and start to finish. Look at these: 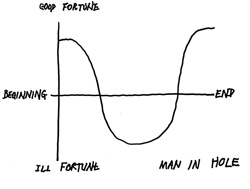 This is a classic plotline. Fits the entire original Star Wars trilogy with each movie being the three movements. Indiana Jones, Back to the Future, The Matrix...heck. A lot of popular Hollywood, Joseph Campbell storytelling. This is a score five runs in the second, give up ten in the sixth, then rally in the ninth, game. That's an incredible evening of sports. That's the kind of game you tell people about years after the fact. That wasn't today. 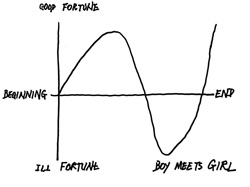 This is your standard romantic comedy. 500 Days of Summer. Rushmore. High Fidelity. This is an entirely different kind of game...a score one run in the first, go down two in the seventh, then win in extras with two outs in the bottom of the 13th. This is a story and a game about extreme swings and shifts, moves from A-Z with a second of thought and quick, heightened breath. These are also games you tell everyone about for years...and if they are done in the playoffs, all the better. This is emotion to the extreme--Red Sox/Yankees 2004 ALCS. This wasn't today. 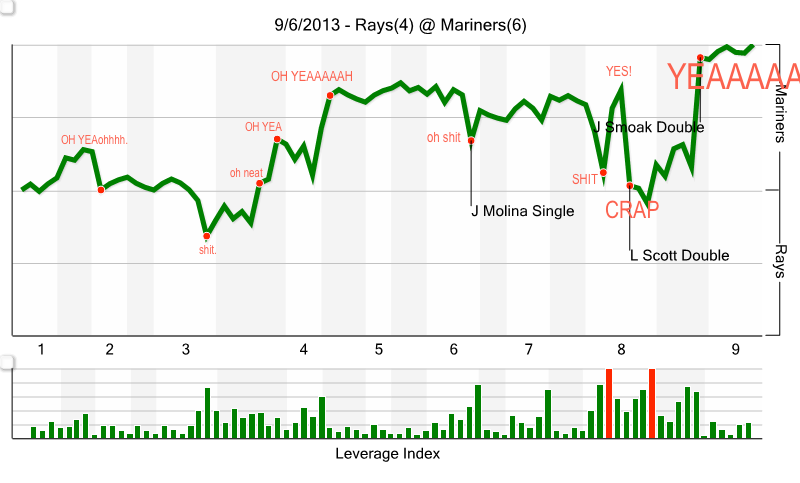 Welp. This is all over the place. I have no idea what story this is. This is a Oh yeah hits! Oh shit, hits. Oh yeah, dingers! Oh shit, dingers. Oh yeah errors! Oh shit, errors game. But the Mariners won, and ultimately, that's all that matters. What movie is this? What story is this? Who knows. The Mariners are just doing whatever they want at this point. I'll just take a win, thank you very much. Now lets have a straight line for James Paxton tomorrow, what do you think?

1. Favorite college class (if you went):

3. If you could do away with one M's uniform...which would it be?

4. If the M's fire Eric Wedge, who should they get to replace him with?