The dark days are here. Despite a horde of young exciting players, interest in the Mariners has waned. Since I like to wait until interest is at its lowest and the least amount of people will read or be receptive to my ideas, I figured now would be a good time to complete this analysis and post it. What traits would The Perfect Mariner possess? I decided to break this analysis into two parts, tangible and intangible.

1) Power - The Perfect Mariner would hit the ball hard. Well, not just balls, I imagine he or she would hit most things very hard. Power is a skill that translates to many facets of this universe, one of which is the ability to swing a piece of a tree at another thing made from trees wrapped in a dead animal. The amount of homers and doubles, ISO and the MPH of a ball leaving the playing area are some of the ways we measure power. Additionally, a Mariner should have the power to yank on ropes and "plow sails" or whatever seafaring term you fancy. Power is important and the perfect Mariner should have a skiffload of it.
Examples - Carlos Peguero, Giancarlo Stanton, Mighty Mouse

2) Average - A lot of smart people hate using batting average because it is kind of bad at showing what it is meant to show in the sense of 5-tool players. This tangible tool really means we want our Mariner to make good contact and to make good contact often. If a player doesn’t make contact with the dead animal wrapped tree sphere then their power is nearly useless (See: Carlos Peguero {Disqualified from contention for this contest: Carlos Peguero:-(}). A Mariner with a good average would always deliver their goods or something, whatever, who fucking cares, average sucks [throwaway, start over]. A Mariner with good contact skills would always ram their trireme right into the perfect spot on the enemy ship without causing themselves damage and sinking the enemy ship quickly in order to move onto the next enemy. A Mariner with good contact skills would be afloat in a sea of his drowning enemies.
Examples - Ichiro, Miguel Cabrera, John Smith

3) Speed - In general, a fast player is not a powerful player. That is why a fast, powerful player is so rare and nice to have and why we don’t throw around the term 5-tool very often (We do though, they do, they use it too often). Speedy players beat out more grounders, cover more ground on defense and steal bases. Some of the best Mariners in history were also good at stealing. Some of them were actually designated [PIRATES], which is a different organization but most pirates were Mariners and not all Mariners were pirates. Some Mariners were smugglers and some were privateers and both of these groups tended to also be good at stealing and were also very speedy sailors. Speed is a great attribute to have for sailing or baseballing.
Examples - Ichiro, Billy Hamilton, Sandra Bullock in Earth’s orbit flung from an exploding spacecraft

4) Defense - A good way to win baseball games is to prevent the bad team from scoring runs. Good defenders can help a team achieve this. Good defenders are also fun to watch [insert link to Brendan Ryan clips]. Defense isn’t very funny because it is very serious business. Good defense is stout, and imposing and it is something you don’t make jokes about. Brendan Ryan is a good example of good defense because he is much like a naval blockade, and the ball is the speedy smuggler trying to sneak through the blockade to resupply the awful, guilty people that are being starved out inside the blockade. The perfect Mariner should be good at blockades because it is something that often comes up in the naval world.
Examples - Ichiro, Brendan Ryan, The Little Dutch Boy

5) Magical Ability or Navigation Skills - Shit, I can never remember the 5th tool, no one can, this is probably a stupid way to define a player. We’ll just go with magical ability or navigation skills for the 5th tangible tool. Magic is very useful for a baseball player. That’s it, no more description, if you can’t figure out why magic would help a baseball player then no amount of fancy words are going to help you. Ichiro is a magician and is an amazing baseball player, does that help you? Just check out some old videos of Ichiro or Vlad. Wait, would magical ability be an intangible skill? Probably, just swap it down to the intangible section and bring one of those up here. Same reason for not explaining magical sailors, grow an imagination.
Examples - (Magic): Ichiro, Vlad Guerrero, Merlin

Navigation skills are very useful for baseball players or Mariners (or hunters or hikers or bigfoots). Navigating the bases or navigating a bat through the zone I guess. Or even better, navigating the outfield to where the ball is going to be. This skill used to be called "takes good routes to ball" but from now on will be called "navigation skills". The wall in right field is now called Rotterdam and Ichiro successfully delivered his shipment of wands and dike plugs to the port.
Examples - (Navigation Skills): Justin Smoak (Hunter), Luke Scott (Hunter), Sir Francis Drake (Circumnavigator/Privateer)

1) Name and/or Nickname - A strong, seaworthy name is imperative for the Perfect Mariner. Failing that, a good, lakeworthy nickname would suffice. Having both would be for the best. It would also be for the best to avoid any nicknames that are too piratey, like "Blackbeard" or "The Pirate". Any traits stereotypically attributed to sailors would also be welcomed. This includes anything related to sailing, drinking, eating citrus fruits or enjoying brothels in skeevy ports.
Examples - Sailor Stroud, Chris Sale, Steven Rum, Anthony Drinkard, Bob Lemon, Dip Orange, Randy Johnson

2) Gristle = Grit + Hustle - Two of the intangibles that people most like players to have are grit and hustle. Everyone likes to watch people who try hard and get the most out of their meager talents. For Mariners or baseball players or tanners or thatchers, a gritty, hustling professional is loved by many humans and respected by most canines. Gristle is all that, but more. It is the thick layer of flab that protects a player from the outside world. A healthy coat of gristle protects them from collisions and from balls hitting them in their sensitive places and from the long grind of a season sitting on a pine bench. It also shelters them from inclement weather. The ability to survive collisions and bone-chilling cold are also extremely useful traits for a seagoing Mariner to have.
Examples - Willie Bloomquist, no, shit, weight, Old Griffey Jr. or David Wells

3) Sense of humor - Much like magic, the requirement to have a good sense of humor is not something one needs to explain. Whether it’s entertaining on-field antics, a quality joke-filled twitter feed, or a hilarious De Niro impression, a sense of humor is a necessity for a 6 month season or those long trips at sea.
Examples - Munenori Kawasaki, Brandon McCarthy, Brendan Ryan, Mitch Hedberg

If asked, I'd say the best part of the offseason is not having to end everyday by showering with all of my co-workers.

4) Clutchness - This is another of the popular intangibles. It is even harder to detect in the real world than grit or hustle but its unquantifiableness does not negate the inarguablity of its existence. Some people just perform better under pressure but until baseball front offices start employing psychological stress tests (Conspiracy Theory: They do, they have to, how could they not, CFA {Clutch Factor Analysis} exists man, why else do players wear those Phiten CAD {clutch augmentation device} necklaces if not told to by the men in black in their deep bunker front offices. Makes you think man, like, what else are they keeping from us, steroids, aliens, genetically engineered players {*side eyes at Trout*}…) we won’t know definitively who the best stress performers are. Do you think that a cool head under high pressure would help a Mariner in a vicious storm? You’d be wrong, it wouldn’t, storms generally form in low pressure areas, idiot. A Mariner that can deal with high stress in a high pressure situation in a low pressure atmosphere though, you bet.
Examples - Edgar, Not Arod, Tommy Lee Jones in Volcano

5) Boat - Does he have a boat? Oh, here it is, this is the intangible that should take magic's place on the tangible list.
Example - none

So what do we get when we stick all these traits in a blender, or the naval equivalent of a blender (the blender is actually a signature modeling algorithm I built to weight each of these factors and spit out a result)? A healthy heaping of Ichiro, a few tablespoons of Brendan Ryan, one serving each of Edgar and Peguero, a well-gristled rump… 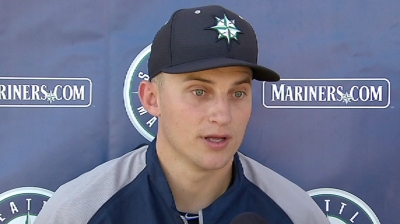 HOLY SHIT! IT’S KYLE "FUCKING SEABOSS" SEAGER! His name even has "Sea" in it. Can someone ask him if he owns a boat?