Erasmo Ramirez goes 6.1 innings holding his own, but the Royals get the best of the Mariners, with a 4-3 victory Tuesday evening.

Share All sharing options for: 62-76: Mariners grovel at Royals' feet 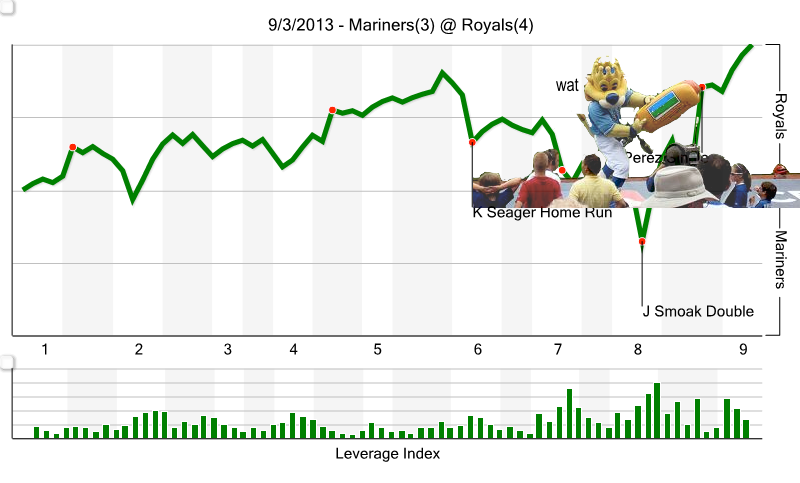 So I've got a couple of questions for the rest of the year.

1. What are you watching for?

I say this because it's September and there are only three teams in the American League worse than the Seattle Mariners.You're obviously still paying attention to baseball as you are reading this blog right now, so you could help me answer these two inquiries, which I'm going to pose in place of our usual post-chart questions.

Today wasn't quite a nightmare, but it wasn't wonderful either. I had a day off work and I'm out of school for the quarter before I leave for Europe in a week, and I'll be lying if I said I didn't take advantage of a day to drink beer at 1 in the afternoon. But that meant that suddenly I woke up reclined in my chair to see Yoervis Medina giving up an RBI single to Salvador Perez in the eighth inning, scoring Mike Moustakas, and breaking the 3-3 tie to eventually give the Royals the win. I only nodded off for about twenty seconds, but of course it was that moment. Maybe this was all my fault?

Today's game was kind of like hearing you are going to get promoted at work, but being forced to stay in the warehouse for the next few days doing your old job. James Paxton and Taijuan Walker are in the dugout, and we were watching Endy Chavez generate four outs, watching seven runners walk off base and back to the dugout instead of heading to home plate. But we still got an Erasmo, and here's what he did:

Seriously, though. It wasn't Erasmo's best game, but he did limit the Royals to 3 runs while giving up 7 hits, which is good considering how much they steal, how fast they run, and the fact that they only had three hitters in today's starting lineup hitting below .240. I'm still not too worried about Erasmo, and even if today made me furl my brow a bit, the fact remains that he's 23 years old and has loads of innings left to figure things out. I was still living with my parents and trying to be in a band when I was 23, let alone pitching to professional baseball players in a major league game broadcast live on television making as much money as my father. I don't think command is Erasmo's issue--it's pitch selection, and getting himself out of trouble. Experience stuff. That's not a mechanical issue, and that's good because that's fixable.

What is trouble is the fact that the Mariners yet again let themselves get trapped with runners on base and converted a whopping 0 for 9 runners in scoring position throughout the entire game. Ugh. But they got on the board in other ways: Kyle Seager struck first blood in the sixth inning, depositing a Bruce Chen fastball about nine trillion miles into right field and scoring Franklin Gutierrez, who was on first base. Then, in the sixth, Abraham Almonte bunted and showed more of his incredibly impressive speed, beating a throw that would have probably been out had it been anyone else. Kendrys Morales came in to pinch hit for Brendan Ryan, singling into right field, and before you knew it, Almonte was standing up straight on third base.

Seriously. I love this man. I know that he has only played in as many games as I can count on one hand, and I know that sooner or later pitchers are going to figure him out and throw him something bendy, and I know that the Yankees probably didn't give up him for nothing, because it just seems too easy and too unbelievable that he came over for Shawn Freaking Kelley, but maybe...you never know.

If Almonte can keep up 2/3rds of the production he seems capable of, he is by far a competent 4th outfielder on a playoff team, and unfortunately, just as impressive as most of our prospective 2014 starting outfielders. He was 1-4 today, and only struck out once, otherwise being BABIP'd into a set of outs and being fooled by a Greg Holland slider in the ninth. I wouldn't be worried if 2001 Ichiro struck out against Greg Holland in the ninth. This is hyperbole. Abraham Almonte seems amazing. Abraham Almonte might be really good. Abraham Almonte might be incredibly lucky. Abraham Almonte is a total fucking mystery, and at the very least, that's a lot of fun to watch right now.

At one point this could have been an extra innings nightmare. That didn't happen. While the game was tied 3-3, Justin Smoak hit a double off Royals' lefty reliever Tim Collins, which was a welcome sign considering he's been hitting .161 against LHP this year. But of course, the Mariners' next problem beyond batting average and strikeouts emerged its ugly head here, with runners on third and second and one out: a Mike Zunino strikeout and an Endy Chavez lineout to end the inning. Bzzzzzzt. Game over.

There is more baseball to be played in Kansas City tomorrow, and we get to see the nice shiny toys during the next couple of days. Rejoice! But for now...answer the above to questions for me. What are you going to be paying close attention to? What do you hope happens? Is 2013 really over? Or is there something left for us to see? Do I have to watch football? Don't make me watch football. Ugh.