Raul Ibanez hit his 300th home run on Saturday, tied an impressive old person record, and wants to return in 2014. I hope he does - just not with the Seattle Mariners.

This weekend, Raul Ibanez launched his 300th career home run, as well as his 29th of the season. The latter tied Ted Williams for an old people record of sorts, and the former is an impressive milestone for a player who's managed to hang around the league for a remarkably long time. I missed out on both.

I was covering the game on Saturday, but had the game on mute as I cooked dinner with my wife. When Ibanez hit a home run, I didn't realize the significance until the next morning, as going through Twitter and reading in the comments made me realize I'd missed mentioning it in my recap. I didn't intend to miss it, but it's indicative of my apathy towards Raul Ibanez and what the Seattle Mariners attempted to do this season.

The Mariners should celebrate what Ibanez did on Saturday, and so should fans. You have to be a pretty good hitter for a pretty long time to hit 300 homers in this league, and what Ibanez has done at the plate at age 41 is fairly ridiculous. His 129 OPS+ is the 2nd highest of his career, and so is his 123 wRC+. His ISO of .254 is the highest of his career. Raul Ibanez wants to keep playing baseball. He's having a renaissance year, he's a local icon and fan favorite. Ibanez would probably jump at the chance to return to Seattle in 2014. Please don't do it.

There's a couple things working against Ibanez. While this season has been a remarkable resurgence, it's his best offensive season since 2009. His overall line was fueled by a hilariously awesome hot streak through May and June, but the 2nd half hasn't been so hot.  His strikeout rate is at a career high. He's going to be 42.

Then of course there's the lessons learned (or perhaps not) from the Ken Griffey Jr. fiasco. It's awful to watch a respected veteran's career fall apart in front of your eyes, and even though Ibanez has managed to punch father time in the face so far, that time is coming very soon. Wherever Ibanez is in 2014, there's a potential for things to get painful.

Still, there's a legitimate argument that Ibanez should return again as a designated hitter, or maybe a platoon bat off the bench. It's not a the worst idea, in theory - Ibanez clearly still has some pop, and while his ability to sustain it another year is questionable at best, his bat can be (and has been) an asset. If everything went according to plan, it would be a reasonable idea.

But the Mariners decision makers aren't particularly reasonable, at least under this regime. Things will go wrong. Ibanez will end up in left field again, and he'll probably play a ton. Ibanez cost the team over 15 runs this year with his glove, and he did that while playing approximately half as many outfield innings as he did in the prime of his career. Ibanez's -15.7 UZR was amassed in just 792 outfield innings. His UZR/150 was a career worst -24.5. He simply cannot play in the field anymore, it destroys almost all of the value he brings with his bat. It's why, despite his reassurance, Ibanez has been worth merely half a win this season.

Let's have a Raul Ibanez conversation 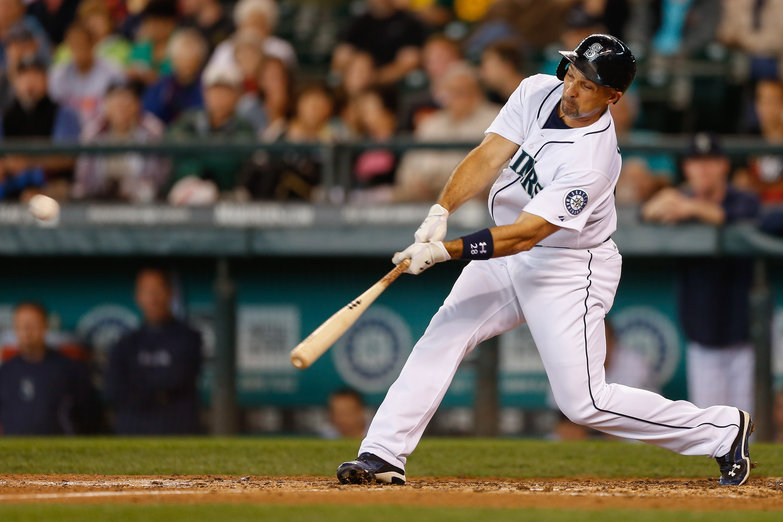 Anyone that's read this blog for more than a few months knows about Ibanez's limitations. The glove is murder to his value, especially at this stage in his career where he's lost yet another step. Don't like defensive metrics? Fine. Don't like a gallery of his finest gaffes? GET OUT. Even the most traditional scouting minds will admit that he's among the game's worst defenders, and that's been more evident than ever this year. Actually, Ibanez has made less low-light mistakes this year, but perhaps that's simply because he hasn't been able to get to the ball to make the gaffes. I suppose the theory that players can't make errors if they can't get to the ball - in support of defensive metrics over fielding percentage - can apply the other way around as well.

Of course it's unfair to compare the two, but the point is there. Speed and defense matter tremendously to overall value, and everything Ibanez has to offer is beyond cooked except for one thing - dingers. That lone skill, looking at his career arc over the past five years, seems primed to regress yet again. In order for him to have value to the Mariners in 2014, he simply cannot play the field at all. I don't trust the Mariners to follow through with that, and neither should you. Things go wrong, and in times of need, teams turn to veterans.

This isn't meant to dump on Raul Ibanez. What he's done at the plate this year has been remarkable, and it's been a lot of fun. Tying Ted Williams for the most homers in a 41-year-old season is even cooler than his 300 home runs. There's just six games left, and I'm rooting like hell that he breaks it. Ibanez is a pro's pro, and has always busted his ass despite his limitations. Managers and teammates love him. He's a positive influence in the clubhouse, but whatever effect that has really hasn't done much to stop the bleeding in 2013. It's not that I don't believe his presence has value, it's just that it can't be quantified and there certainly doesn't seem to be many tangible results from it.

I have a great deal of respect for Ibanez, and wish him well on his next stop. Hopefully he keeps slamming the middle finger to father time and hits another 25 dingers next year for somebody else. The Mariners are fortunate to have had things work out the way they did with Ibanez this year, and it that resulted in half a win. Please don't push your luck, M's. Thanks for all the memories, Raul. Go get #30.