Though it was in condensed form, Felix was his normal self and the Mariners beat the Angels on a rare righty home run from Justin Smoak.

No one's quite sure why the Mariners haven't shut Felix Hernandez down. The sense, though, was that it was about pride as Felix would like to finish stronger than he'd looked recently and the 200 innings pitched plateau was an important milestone to him. While Felix came up just short of reaching the latter goal, it certainly seemed like he accomplished the former.

Felix Hernandez became the first pitcher in the history of baseball to strike out 10 batters in a start that lasted four innings or less. It's a very specific stat, and it's not an unusual feat due to the skill required, just that if you strike out ten guys you normally go longer than four innings. But still, Felix was Felixing. Not, you know, the meme-ified version of Felixin—just being his normal self.

And that's the thing, Felix was such his normal self that no one really seemed to notice. Yes, he did strike out the side in the first, but when he exited following the fourth with those 10 strikeouts, and then this stat was brought up, it elicited a bit of a "Oh woah. Felix struck out 10? Nice." reaction.

Part of the reason no one seemed to really notice, besides the Angels not being all that great and this being not that shocking, was that Mike and Dave were joined in the booth by Jack Zduriencik. When he first joined the booth I was excited by the prospect of it all, but he didn't end up saying much of consequence. There were, however, a few tidbits.

Zduriencik did reveal that Danny Hultzen pitching in the Arizona Fall League is no guarantee, as he mentioned Hultzen still needing to go through some tests—including what sounded like getting a second look by an independent doctor. When Blowers pressed a little bit, Zduriencik wouldn't rule out surgery. So that's fun.

Also, as expected, Mike Zunino will be your 2014 Opening Day catcher "unless something shocking happens." Again, nothing surprising.

It was slightly humorous when Zduriencik was forced to fill time during the bee delay. It produced this funny image: 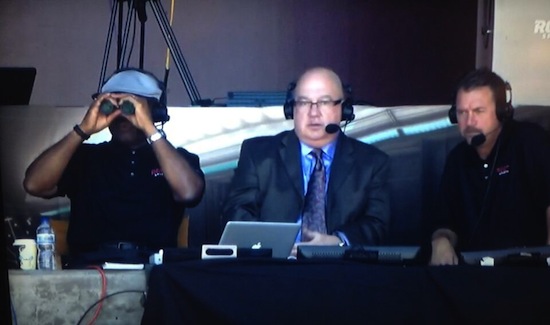 As far as bee delays go—or how you expect them to go, I suppose—this one was calm. There was a swarm of bees that annoyed Felix at first, so they stopped the game. Eventually there was someone out in right field with a broom and a box, then a Gatorade jug. What that was supposed to do, or did, I have no idea. They also had the same guy out behind the centerfield fence, in the middle of the bees, trimming the hedge looking for the hive. He did all this in shorts and a polo short. I don't know, none of it made any sense.

Also, I have no idea why they chose to have Jack on here, but you can't help but wonder. Who makes a call like this? Him? Are we trying to build support here? If so, why do it during a time when the Seahawks are also on and everyone's watching that? I'm glad they did it, but still, somewhat curious.

Returning to game action, Justin Smoak hit his very first home run of the season from the right side of the plate. Instead of it instilling some kind of confidence, it instead reminds you Smoak has been dreadful against lefties. But, there must be something with Angel Stadium as Smoak hit one from each side of the plate here almost exactly a year ago.

After that, it looked like it'd be another game the Mariners bullpen would throw away—or at least extend to extra innings and then throw away. Carter Capps and Charlie Furbush combined to load the bases in the 7th before Yoervis "Wallenda" Medina eventually came in and got out of it on a single pitch. Not content with this degree of difficulty, Medina then put two men on base in the 8th before eventually wiggling out of that too.

After that, Danny Farquhar came in and got the save, allowing only a single to Josh Hamilton. And—that was that.

Oh, Felix will start again Friday. And Nintendo says it's not going to sell. 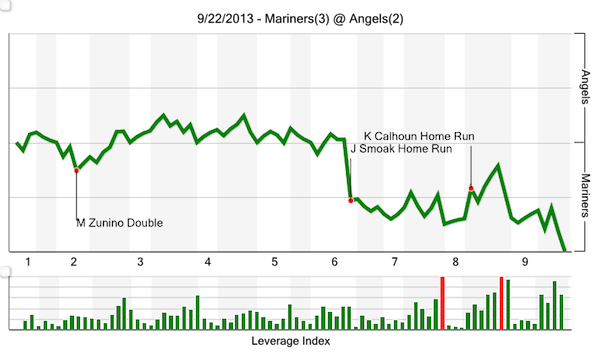