An explanation of WPA and the charts we use

Ever wondered what the charts are that we post after most games? Here you go.

Share All sharing options for: An explanation of WPA and the charts we use

With our ever expanding statistical vocabulary in baseball, its always nice to either have a refresher on the basics that can help us in understanding why we put the value we do in the statistics we choose to talk about. We all know that ERA has fallen out of favor in the statistical community in favor of more comprehensive or specific pitching metrics like xFIP and SIERA, but sometimes we don't even fully realize why it is these metrics are favored. We often just know that someone told us we should pay attention to them.

I'm guilty of this myself. When I first started to enter into conversations with other baseball people using big fancy words like SIERA, I would just shake my head and say "Oh, yes, I know!" Then I would race home, throw open my laptop, and search for SIERA on Fangraphs, read the first two paragraphs, and leave with the ammunition of only "SIERA is better than ERA because it uses more than runs to analyze a pitcher's skillset." Bam. Finished. I'm in the clear.

So with this said, I'm going to use this time to take a look into Win Probability Added, or WPA, a somewhat deceptive and often misused statistic that doesn't really tell us the things we often think it tells us. After a brief primer into the statistic, I'm going to turn around and try to see if it can tell us anything about how Eric Wedge manages games, and what he and Robby Thompson have done for the Mariners in 2013.

You've probably noticed the Win Expectancy Charts we post after each game, followed by some snarky player comparison. They look something like this: 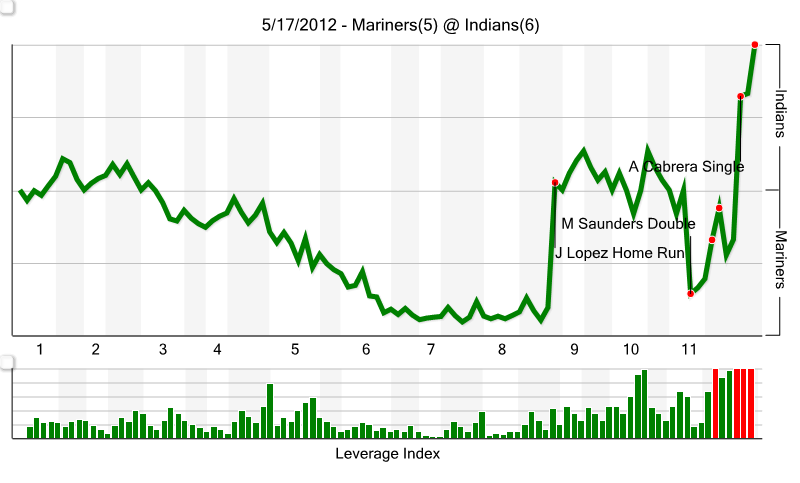 Right? You know these. You may already understand how this all works, and if so, skip to the next jump for the fun part. If not, stick around and let's take a closer look.

Alright, so what is it not?

WPA is not a predictive statistic (well, sort of, but just bear with me here). This puts it in a completely different car than most of the new analytical inventions of the past couple years which seek to underline key factors about a player, and then determine what is likely to happen based upon their past performance.

xFIP is a great example of this, which changes the way home runs are calculated, taking fly balls that "should have" been allowed as home runs. xFIP tells you that Jeremy Bonderman doesn't know how to generate grounders, and he got damn lucky before all those fly balls started to eat him alive.

What is it, then?

Instead, WPA tells us exactly what happened, when, how, and by whom. It is a descriptive statistic. It is calculated by comparing each play of a game against every other game in a certain subset of games that have had similar circumstances (which creates the probability), then finding out how often that team won the game after the play was made. It's a live assessment of each in-game event, and it ebbs and flows throughout the rest of the game as it unfolds.

WPA is handy in a few situations, such as the above chart, which lets us know that Brandon League blew it hardcore. It could also be useful in the eventual possibility that a giant asteroid takes out your local TV station and you can't finish watching the game. Just look at the chart, and you'll at least be able to guess better than 50/50!

This is all really dry, can you just let someone else explain it for me?

Well fine. Here's a good example of WPA in action. You all know what a completed Win expectancy chart looks like...but have you ever popped into the middle of a game to check one out? Here is a chart from the first inning of last Wednesday's game between the Rockies and the Giants: 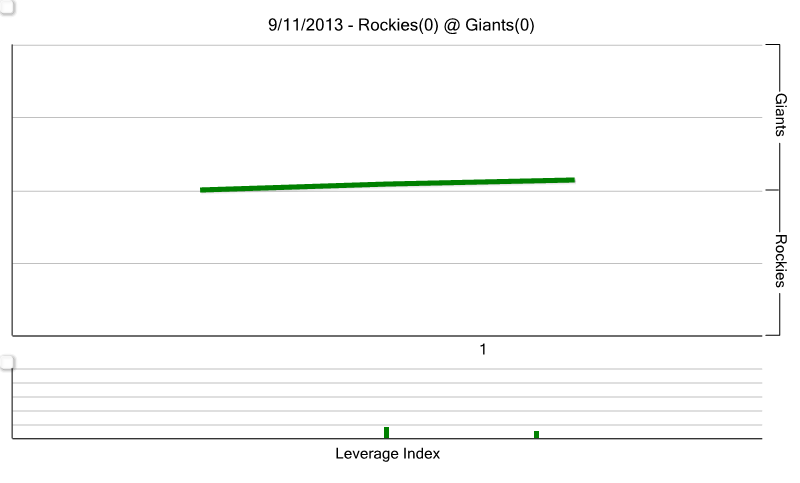 Near Perfectomaster Yusmeiro Petit has made it through two batters, increasing the Giants' win probability from 50% to 53.5% by retiring both Charlie Blackmon and Josh Rutledge. Each green vertical line on the Leverage Index represents a batter. And below, the play by play explanation of each event as it effects the WPA of the game.

And it progresses through the rest of the game until we have the charts as we know them.

Wait, how do you differentiate between pitchers and hitters?

I'll let Dave Studeman explain this a little better from his 2004 piece on WPA in The Hardball Times:

Once again, the concept is simple. Let's say our batter in the bottom of the ninth hits a single to put runners on first and third with no outs. This increases the Win Probability from 71% to 87%, for a gain of 16%. So, in a WPA system you credit the batter +.16 and debit the pitcher/fielder -.16. If you add up every positive and negative event from the beginning to the end of a game, you wind up with a total for the winning team of .5, and a total for the losing team of -.5. And the player with the most points will have contributed the most to his team's win.

In addition, situations are leveraged more as the game progresses and the score remains tied (and the reverse if its a blowout). So if Kendrys Morales hits a walk off dinger against the A's in the bottom of the 10th inning, it's brings a lot more WPA with it than if he hit two home runs in the fourth and fifth of a blowout game where the M's were up 20-1. In the above graph from one of Brandon League's last games as the M's closer, he is debited the most WPA because of the combination of pitches that sunk the game in the 11th inning.

This all sounds great! We should use this more-

Well, no. Again, it's only descriptive. And while WPA gets a lot more complicated with Win Shares and team adjustments, which account for each team's specific lineup, the fact remains that striking out Miguel Cabrera with the bases loaded is probably a better strikeout than if Henry Blanco was up in the same situation. Sure, Miguel Cabrera is going to have a higher career WPA than Henry Blanco. Sometimes for analysis you need to be unbiased and just look at what happened. But it doesn't always work that way, and you and I both know that.

So here I would like to posit that a WPA chart could tell us more about a club's manager than it does any single player. Some theorize that managers do little more than maintain a dugout presence and organize a lineup, but if there ever were a way to actually quantify the difference Eric Wedge makes over not having a manager at all and playing with an auto generated lineup, it's WPA. What happens when you put in a specific relief pitcher? Why do you pinch hit when you do? It's all calculated, measured, and listed in a WPA chart.

Next time, we'll see if we can use this to learn anything about Eric Wedge's decision making.