Felix Hernandez terrifies the fanbase by leaving with injury, responds by popping in massive wad of chew. Oh, and the Mariners lost.

Share All sharing options for: 62-75: Felix terrifies own team, not Royals 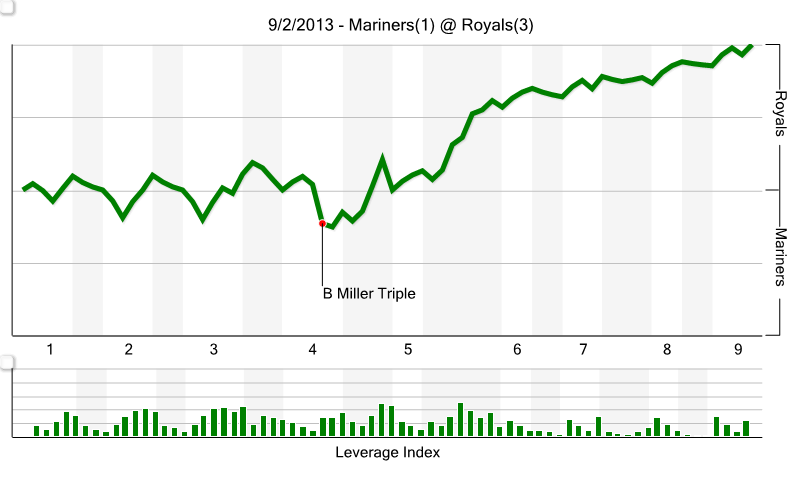 The sight of Felix Hernandez clutching at his back and leaving a game with an injury is sickening. It's not just sickening because it's Felix, it's because at any single moment your personal favorite player could be done. Baseball disguises itself as a casual, slow-paced game where injuries seem unlikely, especially pitching. Felix Hernandez throws thousands of pitches a year, and those spinning, toppling, and flaming pitches lull fans into a false sense of security.

Then, there's that one tweak. That one hitch in a delivery. A misstep. A twist in the wrong direction. Anybody's career can be over and any given moment, and even what appears to be a minor back strain can bring back some irrational fear and pessimism that lives within us all.

Before the injury, Felix came out moving and shaking today. His stuff was on point. Felix cruised until a speed bump in the 4th, where three straight singles brought home the tying run. It's about the process though, and the pitch Mike Moustakas poked for a single wasn't a bad pitch, just a good piece of hitting. A double play got Felix out of it, but he couldn't limit the damage in the 5th, and the Mariners were shut down by Will Smith, which is slightly preferable to Jaden Smith or anything involving M. Night Shyamalan.

Felix returned for the 7th, and that's when Seattle lost their breath. Felix seemed to express mild discomfort after throwing a pitch, grabbing his back. The trainers came out, and Felix came followed them back to the dugout, head down. Everybody panic. After the break, ROOT caught Felix relaxing in the dugout, popping in a huge dip. He seems to be alright, or at least unconcerned. Please be alright. Don't dip, kids.

It's a sobering reality of how fragile pitchers are, even the biggest workhorses like Felix. Felix almost hurt himself earlier in the game, as an infield single in the 5th had Felix scrambling to cover first in time, and he took an awkward stab at the bag to try to beat Jarrod Dyson to the bag. He's fortunate he didn't suffer an ankle injury. Don't do that, Felix. As a matter of fact, stop doing everything risky. Cook your meat until it's done.

Nick Franklin put together three straight walks against Danny Duffy, who wasn't exactly a poster child for great control, racking up 90+ pitches before the 4th inning ended. He allowed 9 baserunners and recorded 11 outs, but the Mariners couldn't do much with it. Despite having multiple runners on base in the first three innings, the Mariners couldn't get any runs on the board until Brad Miller ripped his 6th triple to right field. One Duffy was removed, the Mariners were completely baffled by Will Smith, who was as good as I've ever seen him. Catching every corner, in complete command. The only baserunner he allowed was a dropped pop fly to Dyson in CF. Smith finished with eight strikeouts in 4.1 innings...with 46 pitches.