The Seattle Mariners of Seattle lose to the Detroit Tigers of Detroit, predictably. Abe Almonte leads the Mariners in home runs over the last 1 days. 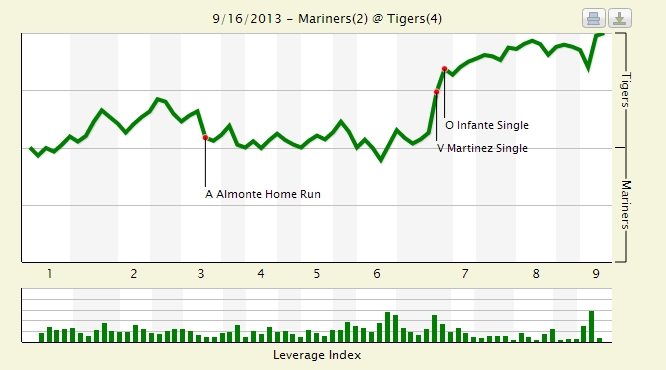 Rather than introduce a game between the most miserable team in baseball against the most miserable city in baseball, let's talk about fan related superstitions. One of the oldest jokes in baseball – and all sports, really – is that if you go to a game and they win, you're the reason they won, and you need to keep going to games or else they'll lose.

It may not be going to the game either. Maybe it's wearing your lucky underwear, or putting your hat backwards, or singing "This is How We Do It" to yourself before each inning. Whatever it is, you "need" to do it, because you know that if you don't, they won't succeed.

Your first reaction to people that do this is probably "you have no effect on the game." Of course they wouldn't. Why would the way someone wears their hat affect the game? Why would not washing your underwear affect the game? How could you affect the game in any way? The game was going to be played and have the same outcome, regardless of whether or not you were there or engaged in your "lucky" superstition.

Obviously that's the logical reaction. It's also the wrong one. The reality is that you always affect the game, even if you don't realize it.

Your lucky underwear may be uncomfortable, causing you to shift slightly in your seat. That shift distracted the girlfriend of a heckler, who was about to give her boyfriend a kiss before rethinking her life decisions after checking out your glorious booty. The heckler, undistracted himself, then taunted Dustin Ackley. Dustin Ackley barely heard it, but there was still the perception of someone yelling. He hits a line drive to right field and is safe at first.

Now, you didn't wear your lucky underwear that day. You didn't shift in your seat. The heckler's girlfriend wasn't aroused by the prospect of another man's hindquarters. She kissed her heckler boyfriend. He kissed back. Dustin Ackley was now swinging in different conditions. The swing was .1 MPH faster and 1 mm higher. He hit a line drive straight at the second baseman, causing an out. Everything that happened from then on would have been different – not only for that game, but for the rest of time.

The Mariners lost 4-2. It's time to throw out your underwear.

There are now 12 games left in the regular season. Soon there will be none, and then comes one of the most frustrating or most amazing offseasons in Seattle Mariner history, as they currently have a team that is clearly nowhere near playoff ready, but with some promising players. It's going to be an exercise in emotional management.