Dustin Ackley's 2nd half has been terrific. What adjustments has he made, and is it all an illusion, or is he finally back on track?

Share All sharing options for: Is Dustin Ackley fixed?

It's hard to be optimistic about Dustin Ackley. After he met expectations in his rookie year, the late season decline didn't seem like that big of a deal. It's a long season. He'd played more games than ever. He'll be fine. Sound familiar? When Ackley fell flat in 2012 and again in 2013, it's safe to say many people gave up hope. Simply put, Ackley was a shell of the player he once was. He'd developed a bunch of bad habits at the plate, ones that resulted in approximately 18,000 grounders to second base over the course of 200 straight games. You may think this is a gross exaggeration, but it is most definitely not. It may have been closer to 19,000. Excuse my inaccuracies.

As time went on, pitchers continued to abuse Ackley's fatal flaws - his overly discerning eye and penchant for trying to pull things. Umpires started to make Ackley pay for watching borderline pitches away go by, and Ackley didn't adjust to what is commonly referred to as the lefty-strike zone - that expanded area where umpires call strikes that aren't really strikes but you have to swing anyways, because you're left-handed and that's your punishment for stepping in with an advantage, apparently. Ackley's stubbornness seemed to be a barrier to this all, as he was so often right but got punished for it, wrongly. I contended a while back that Ackley just needed to start slapping all of those pitches away into left field and forget about walks for a bit, or pitchers would never respect him there. Buck conventional theory, eschew walks for the greater good. This wasn't the most popular opinion.

More: Ackley is probably violating the pine tar rule Ackley, the outer half, and aggressiveness

That's exactly what Ackley did. In the process, he's actually started to fix some of the mechanical issues that have plagued him, and positive results have followed. In the midst of a middling second half for the Mariners, Ackley has been a bright spot, being the kind of hitter Mariner fans envisioned he might be when he was first drafted.

Since any sort of in-season end point is arbitrary by nature, we'll start with the most convenient one, which is post All-Star break.

Other than the massive increase in performance, the first thing that appears is Ackley's inflated BABIP, which can certainly be used to discount some of the performance, and I've seen it applied as such. It isn't enough to offset everything.  It isn't, at least not entirely. Some of this is probably some positive regression from the deflated .245 first half, and some of it simply has to do with better, harder contact. Ackley ran a .339 BABIP in his rookie year, and carried a well-above average BABIP in the minors as well. If you haven't noticed, when Ackley is raking, he hits the piss out of the ball, and if this is his true talent level going forward, expect him to maintain a higher BABIP than league average, which has been just about .297 in recent years.

Still, Ackley isn't going to sustain a BABIP that high forever, and there may be some regression to come, but maybe less than you think. Ackley's overall season still sits at .304, barely above league average. The recent upshot in BABIP doesn't cheapen all of the improved power and plate discipline though to even the harshest skeptic, and there's clearly positive developments there. Ackley's decreased his strikeout rate (17.4% to 14.5%) and increased his walks (7.3% to 9.6%). Ackley's patience is a more recent development, as he went for a month-long stretch in August/September where he walked on 3 times over 89 PA, striking out 15 times in the process.

This was Ackley's "stop letting that outside pitch go by" phase, and if you play with the sample a little more, he was still walking a bit right after the break, but to more of the same results. It wasn't until late July when Ackley stopped walking almost entirely, and that's when the huge surge in production came. That phase has passed, and now Ackley has a whopping 10 walks in his last 32 PA, which is where we stand now. He's also struck out just twice in that same sample. As usual, the truth lies somewhere in the middle, but Ackley's 2nd half evolution is something that can't be ignored.

As I mentioned before, the way pitchers are coming at Ackley is once again morphing, as visualized by these charts, courtesy of Brooks Baseball.

Here's a look before the break, when pitchers were constantly exploiting Ackley off the plate. 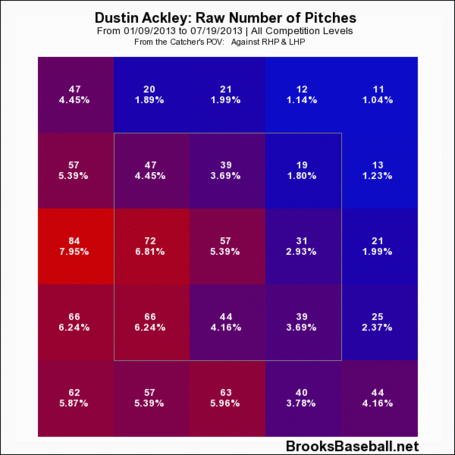 Now, a look after the break, and the slight but noticeable change. 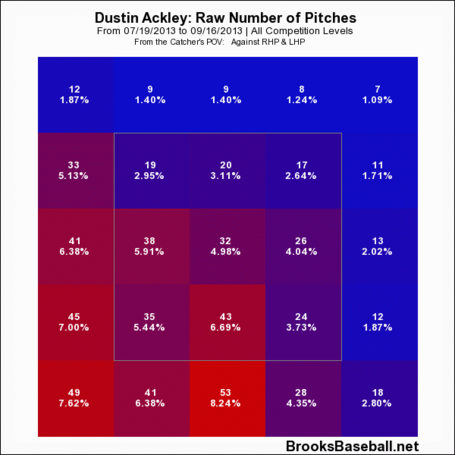 As you can see, pitchers are generally attacking him outside less, and he's gotten more pitches on the inner half.

Not to get super small sample-sizey, but I wanted to take a look over his last eight game stretch where he's posted a .531 OBP. 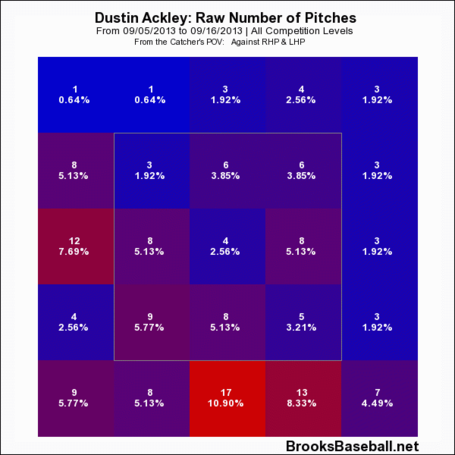 He's seen as many pitches on the inner half as he's seen on the outer half, and while this is certainly nowhere near conclusive given the eight game sample, it's encouraging. Ackley's not getting abused on the outer half like he once was, and he's seeing better pitches to hit. It's not unreasonable to suggest that pitchers are beginning to respect Ackley again, and as a result he's getting himself into better counts and making harder contact. It doesn't hurt that he's also been ripping liners down the left field line when pitches catch a bit too much of that outer half.

So, is Ackley fixed? It's too early to conclude that, but I will say that it seems like he's scrambled his way back to the prospect he once was, even after taking the long and winding path. This is the Dustin Ackley we all thought we were getting in 2011. I'm personally as optimistic about his future as I was before 2012 began.

Baseball's all about cycles and adjustments, and eventually pitchers will try to pull the same techniques they used before on Ackley. Maybe he'll get too comfortable pulling his increased amount of inside pitches again, and pitchers will be able to manipulate him outside again, and the cycle of adjustments begins again. It's up to Ackley whether he can make adjustments quickly and swiftly.

Ackley has demonstrated enough that he should be penciled in for the team's starting second base job in 2014. His added flexibility in the outfield is nice and he's shown some improvement, but he's still a poor defender in center, and his outfield arm is really bad. Second base is where Ackley has the most value, and now with him threatening to pass Nick Franklin in overall offensive production on the season, Franklin finds himself in the same shoes Dustin Ackley was in for most of the last two years. If Franklin can make positive adjustments like Ackley has in a quicker time frame, the Mariners will be presented with a very fortuitous problem at second base.

Either that, or Franklin just needs a monster beard and magic pine tar-laden bat.