Every season since I've become what I'd call a passionate everyday Mariners fan—only about 2009 to be honest—I've dreaded the last game of the season. It reminded me of the anxiety I'd feel towards the last day of school. Not that the pending summer was all that bad, because come on, but because my grades usually weren't all that great and I'd need to scramble over the last few weeks to bring them up.

This year, that's not the case. The Mariners now have just four series left in their 2013 season and I really don't mind. Are you bummed about this? I'm sure I'll quickly miss having baseball almost everyday, but at this point, I'm numb to it all, numb even to that looming date—"Closing Day"—that in the past has to me marked another year clicking off my life more than my own birthday.

This year, I'm ready for it to be over. I'm ready for whatever the next version of the Mariners brings, and I'm ready to start working towards that as soon as possible.

But, alas, we're still here. We're still playing games in 2013, and we're still seeing games that are rotten through and through. With today's 12-2 trouncing, your 2013 Seattle Mariners have now 'passed' the Miami Marlins and have the second-worst run differential in all of baseball.

How does one get to be, arguably, the worst non-Astros team in baseball?

Well, for starters, Kendrys Morales is the best hitter on your team. Erasmo Ramirez isn't the worst starter in your rotation, but can't be consistently counted upon. And look at the Mariners bullpen. Carter Capps was thought to once be a dominant reliever, a guy you'd combine with Pryor and Wilhelmsen to form a young and powerful bullpen. We're long since past the point where noting Carter Capps not being all that good anymore was worthwhile, but with his outing today his OPS against climbed over .900. The average batter Carter Capps has faced has outperformed the closest Mariners batter, Raul Ibanez, by 100 points in OPS. It's laughable.

But, that's only looking at the known bad. I'm sure the slump has been discussed at length in other posts too, but after his torrid July, Kyle Seager has hit .209/.307/.340. By Mariners standards, that's no so bad as far as slumps go, but for a franchise cornerstone it's a concerning way to close out a season.

Looking at this game specifically, which is the point of the post itself, there isn' much to it. The Mariners were beaten handedly and, if you want to look for positives, there's almost nothing.

Dustin Ackley got on base twice and continues to perform at what I think we'd all agree would be an acceptable level. It is interesting though to see Franklin sit (or not start) for the second consecutive day while Ackley gets the start at second base. Nick Franklin since the beginning of August: .128/.233/.231. He has seven hits in his last 70 plate appearances. Ackley, meanwhile, his 'since August 1' numbers: .346/.417/.505 At this point, I'd be surprised and disappointed if Dustin Ackley isn't your 2014 Opening Day second baseman.

The Mariners two runs game on a Franklin Gutierrez ground ball single up the middle and a Abraham Almonte sac fly. My only two notes on these are:

I don't have too much else to say. We're now a little more than two hours from the game everyone truly cares about, save for us non-Hawks fans of course (go Packers). I hope everyone has fun with that, and especially, stays safe. Go Hawks.
Your chart: 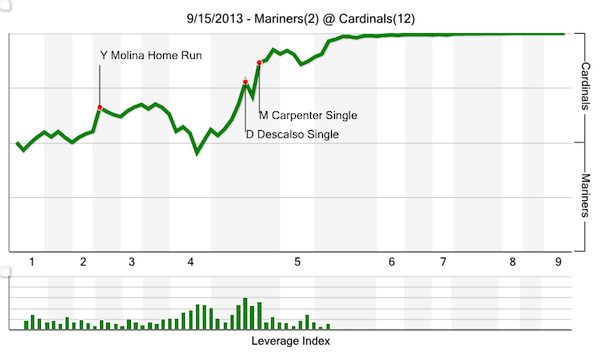 Couple questions to kick around.