The left-hander is getting a chance to show his stuff at the big league level this September, and it is finally looking like the Mariners could have a couple of their vaunted pitching prospects breaking through as big leaguers.

Share All sharing options for: Going the Distance for Seattle: James Paxton

There was talk when young Taijuan Walker was brought up to Seattle about the timing of the promotion and the way that the schedule afforded Seattle to give their top prospect a "soft landing". Two of Walker’s three starts were against the Houston Astros, and while they have certainly given the Mariners fits this season, the fact that they are the worst team in baseball can’t be ignored.

James Paxton was given no such ease into baseball’s highest league. His major league debut – which incidentally was also his first major league win – came against the Tampa Bay Rays, a team legitimately in contention for a playoff spot and brimming with talent, boasting one of the top five offenses in the American League. True, Paxton, currently 24, is much older than Walker, but Taijuan actually came into the organization earlier and he has more career minor league innings than James. Nonetheless, Seattle seemed to either be more confident in – or perhaps less worried about – how Paxton’s adaption to facing big league hitters would go. He opened at home with the Rays and right now is scheduled to face the St. Louis Cardinals and Los Angeles Angels of Anaheim on the road in his next two starts.

True it is September and the Mariners currently sit 18.5 games out in the AL West and 15 games under .500 in yet another in what has become a somewhat Groundhog Day-esque string of poor seasons, but the fact that the club is throwing Paxton out in these games is a sign that they are truly interested in seeing what he can offer.

Paxton’s season in Triple-A doesn’t look all that impressive on the surface: a 4.45 ERA and 1.38 WHIP in his 28 games and 145 2/3 innings, including seven starts that saw him yield five or more runs. But he seemed to turn a corner with his command in July, and just counting his 10 starts from July and August – the last 10 starts he had in the minors this season – James posted a 3.11 ERA, 1.23 WHIP and threw 63.3% strikes. And when looking at some of the advanced statistics, it seems that Paxton’s overall stats may have been inflated a bit by bad luck. He was victimized by the 8th highest BABIP in the Pacific Coast League (.338) among the 47 pitchers who accumulated at least 100 innings and his FIP of 3.55 was the 9th best in the league from the same sample thanks to just allowing 10 home runs despite playing in what was the third most homer-friendly park in 2013. His 131 strikeouts were also tied for 3rd in the league while his two complete games – which both come during that Triple-A season ending stretch of 10 starts – tied for the PCL lead.

Paxton has had his trouble commanding his pitches and limiting walks throughout his minor league career, and his scouting reports – while universally trumpeting his stuff – are all littered with that caveat. A lot of the command troubles likely stem from his complex mechanics, which aren’t the cleanest or most consistent and include a backside dip as his hands break to come to the plate. The stuff includes a fastball that he can run up to 96 routinely and higher at times – like in his debut, when he topped out at 99.03 MPH. He holds that velocity late into games, too, often showing increasing velocity as games go along, and the lefty gets good downhill plane on the pitch, using his frame and long limbs to his advantage, pitching even taller than his 6-foot-4 frame. He compliments the plus fastball with a curve that is plus at times, a developing cutter, and a fringe-average changeup that he uses more as an infrequent show pitch than as a true part of his repertoire.

While that scouting report may still leave some questions for what Paxton’s ultimate ceiling is, what shouldn’t be questioned at this point is whether or not he is ready for a shot at the big league rotation next spring. Regardless of how his remaining starts go for Seattle in 2013, Paxton showed in his debut that he can pitch at the big league level and that he can get big league hitters out more than once through the order. He threw 59 of his 95 pitches for strikes in that game against Tampa Bay and he got 19 called strikes and eight swinging strikes, again, against a good hitting Rays club that has been even better since Wil Myers was recalled.

But perhaps more impressive than the MPH on his fastball or the number of strikes he threw are the two graphics below from Brooks Baseball showing when and where he threw those pitches that missed the strikezone: 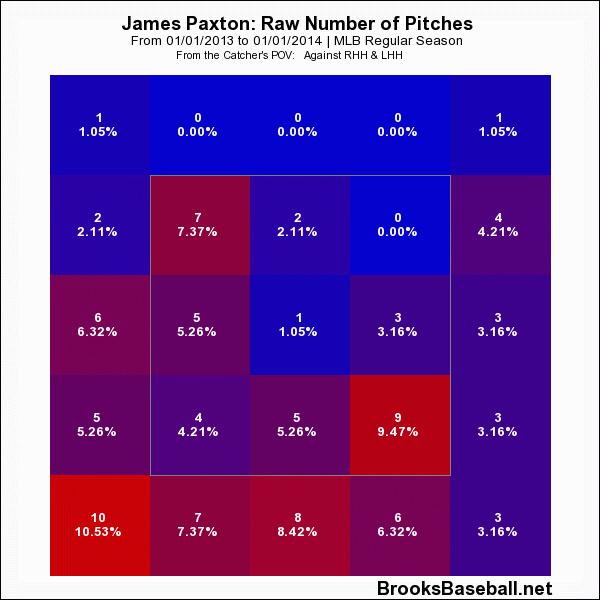 Those 3rd, 4th and 5th inning pitch totals and strike percentages are important. Paxton was working through the Rays lineup for the second time in the game during those innings. He breezed. A single from Myers was the only damage and there were a number of groundouts and a bunch of weak contact. Looking again at the pitch location chart, you can see why; for the game Paxton threw 60 of his 95 pitches at or below the squares in the bottom third of the zone. And maybe more importantly, he only threw one of those 95 pitches in the dead center of the zone. It doesn't take a lot of detailed research to figure out that that type of approach is going to lead to successful starts. Especially when you are pitching with that approach while possessing the type of stuff that James Paxton has. This kind:

Paxton is getting his chance to show the Mariners what he can offer them, and the early returns are encouraging that James has the chops to be a valuable member of the starting rotation for this Mariners team going forward.