Joe Saunders and the Mariners fall 10-5 to the Brewers on Friday, despite a Justin Smoak home run and a little small ball early in the game. 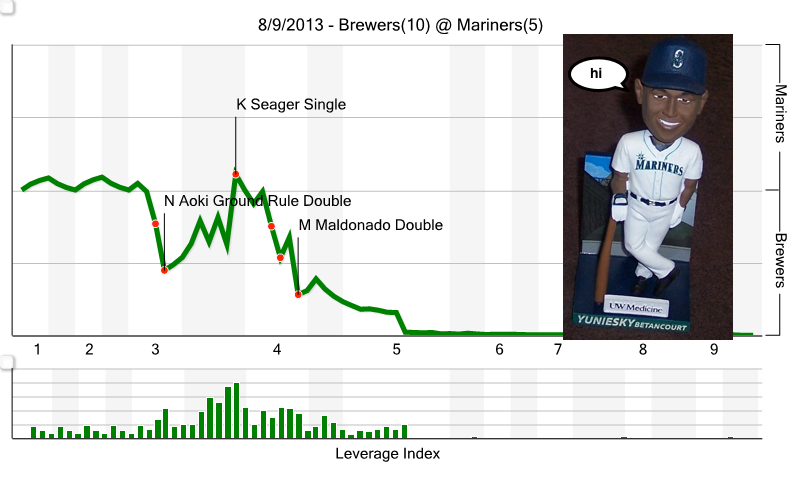 Moldy bread you're stuck with because you ignored the expiration date: Joe Saunders (-.597 WPA)

I'm going to let the game thread speak for this one. Below are screengrabs and inning summaries following everything that happened through this game:

Third Inning: Saunders gets into a little trouble, first watching Scooter Gennett reach after a throwing error by Nick Franklin, then advance to third after allowing a single to Martin Maldonado on a Kyle Seager error, and finally score with Maldonado after Norichika Aoki hits a ground rule double. The infield error narrative continues, and though Saunders gets out of the inning with only two, stomachs turn. The Mariners answer readily moments later, however. Justin Smoak draws a leadoff walk, and Condor hits a single right afterward. The bases are soon loaded after a Brad Miller single that is quickly cloned after Nick Franklin hits into a forceout at home, putting him on first. In comes Kyle Seager, who draws a 6 pitch at bat to finally single into centerfield, scoring both Saunders and Brad Miller after Carlos Gomez bobbles the ball after the catch. Not a Raul Ibanez bobble, but a bobble nonetheless. It felt wonderful. The game was tied, and even Bill Krueger's get-off-my-lawn-ing couldn't ruin the vibes coming out of the M's dugout. 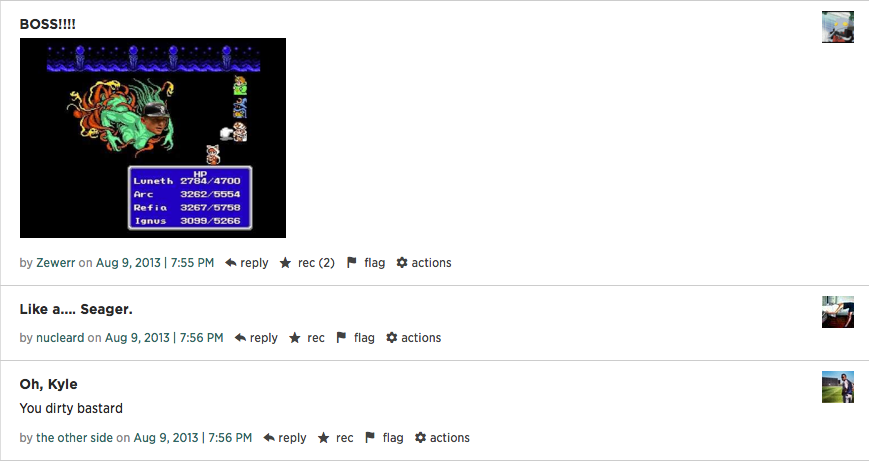 Inning 4: The fourth inning was quite interesting. First, we saw Garlos Gomez single. Gomez is fast on the basepaths, so after Yuniesky Betancourt (more on this crap later) whacked a double down the left field line scoring Gomez, the game was quickly 3-2. But wait! Some lonely fan reached out to grab the ball and deflect it into left field. The umpires quickly gathered together, and decided to reverse it, sending Betancourt to 2nd and Gomez to third. The run was saved. Brewers manager Ron Roenicke ran out of the dugout and tried to reason with the umpires. You've seen Eric Wedge scream his face into a beet. You've seen Lou throw bases into the outfield. Here is what Roenicke looks like: 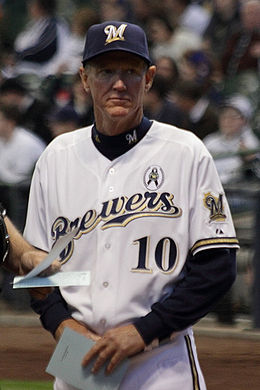 Seriously. Look at this man. Here was his conversation with the umpires:

Ron: Now, now. Gentlemen, please, I beg of you, reconsider. Let me present my case:

Ron: Clearly, we can look at the precedent set by the fan interference rules, but this ball was arguably not stopped by the fan in question. Why then, friends, should we rule this fair-hit ball as a double if its trajectory was not stopped? I say this with the utmost respect, fine sirs.

Ron: Fine but I'm out of Metamucil.

Then Jeff Bianchi scored Gomez so none of this mattered. Also, Martin Maldonado hit a double scoring two. Justin Smoak then walked and the inning was over. 5-2 Brewers.

Inning 5: Alright, look. Fuck the 5th inning. Jean Segura singled, then stole second after Nick Franklin played a great throw too far off the bag. Gomez and Khris Davis walked. The bases were loaded. Then yeah, yeah. Yuniesky fucking Betancourt hit a goddamn home run and fuck that. He trotted around the bases like Bryce Harper and did a little dumb dance when he scored. Bill Krueger said a bunch of stuff about what happens in old school baseball and for once in the night, I was on his side. Of course, they didn't hit him the next time he came up. And the Brewers came out of the inning with 5 runs after Erasmo Ramirez (seriously) entered the game and gave up an RBI single to Norichika Aoki. Oh yeah, the Mariners batted too, and Brad Miller hit a double. That's all that happened there.

Inning 6: Nothing happened outside of 6 outs because ugh screw this game. 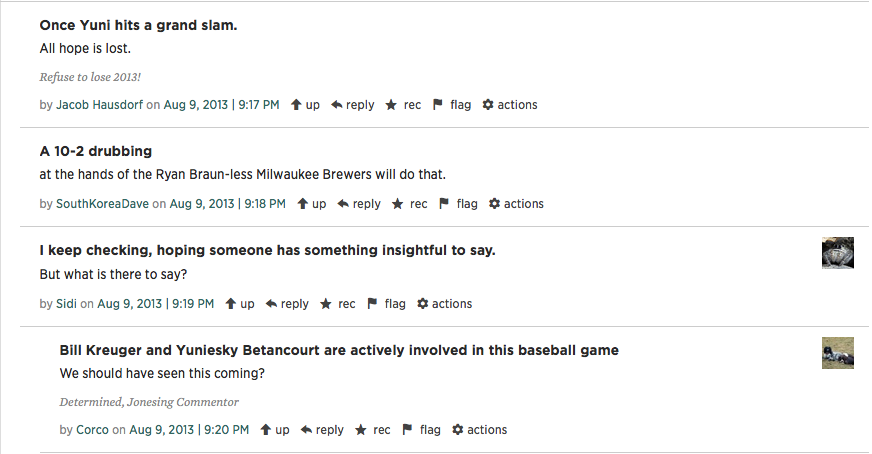 Inning 7: Second worst inning of the game: Yuniesky Betancourt didn't get hit after Carter Capps came into the game, and Michael Saunders scored one run on a Nick Franklin single (finally!). Of course, it was one run that made it 3-10 Brewers so ughhh. Now, I'm not necessarily advocating for retribution here, or that they should have pegged Betancourt. Violence in baseball isn't the answer. But tell me it wouldn't have given us more than this to talk about:

Inning 8: Man, I don't know. Carter Capps remained in the game, getting out of the inning with only 11 pitches to Aoki, Segura, and Jonathan Lucroy. Kyle Lohse was finally pulled for Brewers reliever Alfredo Figaro, and the Mariners did a little bit of damage following a Justin Smoak homer scoring Raul Ibanez, who reached on a throwing error. The one exciting thing about all of this is that Raul Ibanez is nine hundred years old and still tries to reach first like it's the last boat out of town. It paid off here. Well, sortof, because it didn't actually matter. The game started to get blurry here, and I'm pretty sure everyone watching poured another drink, took one look at their Ken Griffey Jr. jersey, and hung their heads in shame. Some of us started paying attention to the insane high desert Mavericks' game instead. It might have been the wisest decision of the night. 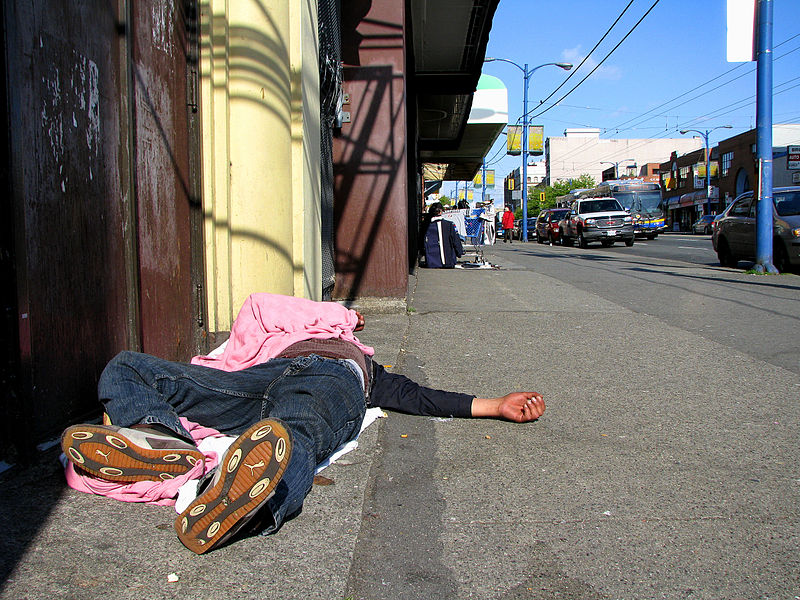