52-61: Mariners stare failure in the face, agree to night out on town

Felix Hernandez leaves his stuff in his Bellvue garage, and the Blue Jays beat the Mariners 7-2.

Share All sharing options for: 52-61: Mariners stare failure in the face, agree to night out on town

So today a bunch of Seattle baseball fans got excited because the Mariners' ace Felix Hernandez was going to pitch a baseball game. There were a couple other people who were also excited because a baseball team from Canada came to town, and they were from Canada so they could see them play in person. One of these teams had a really good pitcher, who is generally known as being The Shit, and strikes out a lot of opposing hitters. The other pitcher used to be good, and then either sniffed some glue or ran over himself with his '86 Bronco or blew his elbow up and now he sucks. One thing was supposed to happen, and everybody was kind of expecting it, and I almost think they didn't even care if it went the way of the other team.

But then the other thing happened and Felix Hernandez imploded and it was stupid. He gave up a leadoff, first pitch home run to Jose Reyes and you kind of knew what was going to happen. He walked Maicer Izturis afterward, but got out of the first otherwise unscathed. Then the 4th and 5th innings happened, and I began splitting time between my living room and my kitchen because I needed more to drink. Every time I would get up, I would come back to see another run on the board. It was obnoxious.

The 4th inning wasn't Felix, either, though he wouldn't help himself out any in the 5th. First, Kyle Seager bobbled a routine grounder from Alex Lind. Lind was replaced on the basepaths after Colby Rasmus hit him with in his next at-bat, which is kind of interesting, but then you have to stop and realize that it doesn't matter because the damage was still done and at least we got to somehow hit them with a baseball, even if it came from their own bats. But then Brad Miller bobbled a throw and Brett Lawrie reached. Next up to the plate: Josh Thole. Lawrie stole second and was thrown out my a mile, but Brad Miller dropped the ball. Emilio Bonifacio came up andzzzzzzzzoh alright I can't do this anymore, it was a nightmare. Felix gets mad sometimes. He slams his mitt down and bites his lip, and turns his cap a little. His velocity rises, and at that moment he is alone with himself, kind of like that cheesy opening to For The Love of The Game when Kevin Costner blurs out everyone in Yankee Stadium so he can't hear them yelling at him. Except Felix was pissed at the Mariners. He wasn't alone in his thoughts. He gave Brad Miller a dirty look, and probably tried to send some thoughts to each of the five infielders surrounding him, but it didn't work because they can't hear mental telepathy. Felix was upset at the errors--4 in total for the game--and unfortunately, I think he kept it a little too tightly in his pocket.

The 5th was different in that it was still raining garbage, but it was Felix's fault this time. His pitch count was high, and he wasn't locating. Here's an at-bat from Jose Bautista that kind of felt like par for the course for Felix's night--get ahead in the count, and then walking or dropping a single into the outfield. 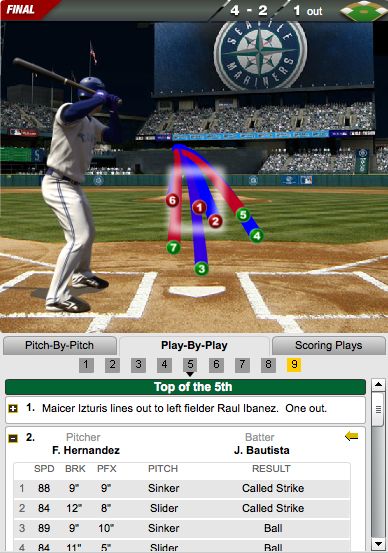 By no means a nightmare in this particular at bat, but man, those first two pitches. Credit to Bautista, too, but sometimes even the best can't do their thing, and suddenly it's 7-0. Felix would only last 5 innings, giving up 9 hits, walking 3 and striking out 3. He was only charged with 3 runs, but the Blue Jays had 6 before he was pulled. Blah.

There was another run scored by the Blue Jays tonight, in the top of the 7th inning, after Edwin Encarnacion hit a double sending Jose Bautista to third. Then Raul Ibanez did something and Bautista scored. I don't want to post the .gif because it's all over the internet. It's everywhere. It made the front page of Deadspin, it was pasted all over Twitter, and is the first comment in tonight's Chart post. Go look it up.

So Josh Johnson was pretty good tonight, and that's nice for him I guess, because he's been terrible this year. But also I don't really care about helping opposing pitchers get better, and I'd rather the Mariners make him feel crappy again. Then maybe they could go meet him in the visitors' clubhouse and bring him a sandwich or something, and be like "Hey, sorry about your rough year, man," and then we could feel better about ourselves and he would feel alright because someone talked to him. I mean, come on. Colby Rasmus doesn't give Josh Johnson any pep talks, he's like 14. Mune probably was nice to him and all, but there is a language barrier there, so that only goes so far. Just, look. Mariners. You struck out 5 times to Josh Johnson tonight and didn't score a single run. You did this backwards.

The good news is that Brad Miller hit a triple in the bottom of the seventh inning once Johnson was pulled, scoring Justin Smoak and Henry Blanco, who singled and walked off Jays' reliever Juan Perez, respectively. But the rally was killed with a Nick Franklin strikeout. I don't want to talk about Nick Franklin strikeouts. There have been a lot of them recently. Remember how Nick Franklin has a big helmet? And remember when he hit a grand slam in Houston that one time? Yeah, lets just ahhhhhhhhhhhhhhhhhhhhhhhh good feelings.

Kendrys went 2-4 tonight, getting stranded after Michael Morse hit the most anti-climactic groundout in the bottom of the 8th following a pitching change. He also hit a single in the 4th. Also, Carter Capps replaced Felix in the 6th inning, and didn't look awful in his return from AAA. He forced three groundouts in the 6th, and had that trouble in the 7th after the Raul error. He of course, wasn't charged with it. I'm not sure why I'm typing this paragraph, because these are all things that you can look up on your own. Maybe it's because I'm trying to find something worth holding onto for the remaining weeks of this season. Maybe it's because I've abandoned narratives and "Meaning" for anything that is going to happen on the field for the rest of the year, and I'm just looking for something great to watch. Maybe it's because when Felix has a bad night, there are still things on this team that we can rally behind and find enjoyment out of. Maybe it's because FINE FOR THE LOVE OF GOD I'LL POST IT

There. Now that feels better.