The Mariners fell 3-1 to the Blue Jays on Monday. We asked a visiting Canadian Blue Jay Fan enjoying a beer at a nearby pub to talk about what he saw at Safeco.*

Share All sharing options for: 52-60: Mariners dumped by Blue Jays 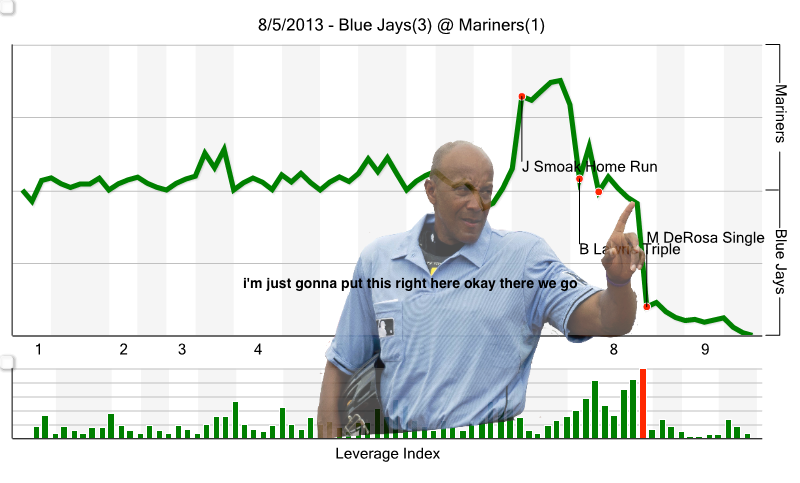 LL: Well hi there, thank you so much for agreeing to this interview with us.

Canadian guy: Of course! Let me buy you a pint! Labatts? Parallel 49? Or perhaps you prefer a whisky?

Canadian guy: Nonsense! Barman! A round for the nice man at my table!

LL: Boy, they weren't kidding about you Canadians. Alright, so lets get this started. Tell me a little about yourself.

Canadian guy: Well, my buds call me Elliot, ya know. I always try and make a trip down to see the Jays when they come to this side of the world. It's not too far a jaunt from Vancouver, ya know.

LL: Oh, believe me, I know. It happens every time. But lets get to the point: what did you think about tonight's game?

LL: Yes, he is, and he was pretty good tonight. I don't know if you noticed, but he had a one-hitter going there for a while after giving up a single to the first batter he saw, Jose Reyes, and then only gave up two walks until Brett Lawrie singled in the 5th.

Elliot: Ah ya, Brett Lawrie. He's a real nice player. A little too intense for my tastes, but he sure can play baseball. He'll do some damage to the other team, ya know. Maybe just tone it down a little though, no?

LL: Oh, we know. That triple he hit in the top of the 8th inning after Justin Smoak finally put a team on the board with a solo home run in the 7th was pretty painful for us to see. That triple was sent in by the only other Blue Jay to have a hit, Jose Reyes. There was some interesting defense from the Mariners too, I don't know if you noticed that.

LL:...Right. Yeah. Well, I felt a little weird in the 8th. We're pretty used to seeing your R.A. Dickey get a lot of passed balls, and he didn't disappoint tonight. But when Iwakuma was pulled and replaced by our bullpen, Yoervis Medina couldn't seem to put the ball into Humberto Quintero's glove. He loaded the bases on a walk to Edwin Encarnacion, and Oliver Perez came in to pick up two runs after Mark DeRosa singled in Reyes and Jose Bautista. What did you think of that little exchange?

Elliot: Tough luck, ya know. But that's what it's like with R.A. sometimes. He sure is a nice pitcher though. Isn't he a nice pitcher?

LL: Well, yeah, but that's kind of a different story. He did strike out 5 Mariners tonight, but he gave up 8 hits, two of which were to Humberto Quintero, who is having a productive couple of games. He hit a ground-rule double in the 3rd, and in the 7th, stretched a single into a double after Jose Bautista fumbled the ball in the outfield.

Elliot: Sometimes the cards fall your way, sometimes they fall the other way. It's life, ya know. You sure I can't get you a pint?

Elliot: Suit yourself, friend. You know, you all have such a nice stadium here. It's really nice to be able to come see the Jays in such a nice stadium. I come down every year with my whole family for these games, and It's nice to see so many blue jerseys and beer-loving Canada folk filling up the seats. I know we must be annoying, but its real nice of you folks to let us come enjoy a couple of games of baseball and let us drink your nice beer.

LL: There are a lot of you, yes. I don't even get it. The Blue Jays and the Mariners have the exact same record after tonight: 52-60. And yet, you still come out in droves like moths to a bright burning porchlight, as if your team was winning. It's always the same with the Red Sox, or the Cubs, or the damned Yankees fans that leave behind a trail of destruction and hollow Coors light bottles.

Elliot: Why a man would ever put that garbage in his body is beyond me.

LL: But those fans all come because it's a thing to like those teams, and it doesn't matter where you live. This Blue Jays thing is just because of Canada, right? There were those two World Series wins in the 90's, but other than that, it just doesn't add up.

Elliot: Oh, you Americans can be so intense sometimes. It's just a fun game, ya know. Steroids, drama, this and that. Don't get it.

LL: Did you even watch the baseball game?

Elliot: Not as such, no.

LL: Your Blue Jays won, sure, but how did you feel about some of the calls that were made tonight?

LL: Yes--it was a nightmare. Did you see those botched pickoff calls made late in the game by the umpiring crew?

Elliot: Oh, I think so. Remind me again what happened.

LL: It was egregious. Insane. A nightmare. First, 1st base umpire Quinn Wolcott missed a close pickoff that Justin Smoak easily got in on time. Ring a bell?

Elliot: Hmm...Maybe. Not really sure, but I am sure I need another beer here.

LL: Alright fine, you definitely saw that insane pickoff to 2nd from Oliver Perez in the 8th right?

LL: Edwin Encarnacion had a sizable lead off the bag, and Perez threw to Brad Miller, who not only beat Encarnacion to the bag, but was positioned in between the two on the tag. Miller got his hand in, and had enough time to pull his mitt up to show he had the ball before Encarnacion was settled. 2nd base umpire Dale Scott inexplicably waved his hands to call Encarnacion safe, and Miller erupted. I erupted. He screamed incredulously and had to pull his mitt up to his mouth to stop from yelling the Fuck word in Dale Scott's face. Brad Miller! Little, innocent Brad Miller looked like he was ready to set a car on fire. And how about that incompetent CB Bucknor behind the plate? Huh? Just the worst.

Elliot: Oh, I don't know about that. I mean, sometimes you just have a bad day, right?

LL: No. Bullshit. Look at this strike zone. Look at these awful calls: 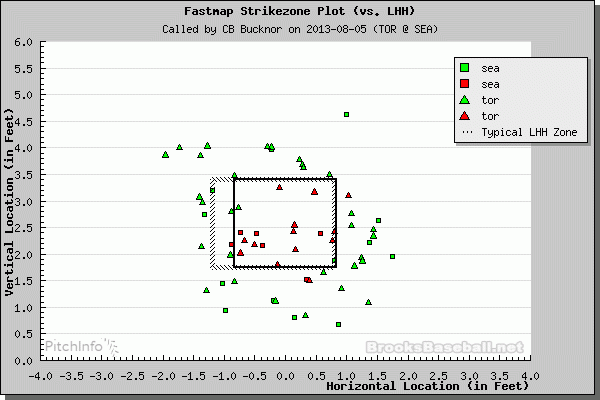 LL: ...well fine, but it felt a lot worse. He had that one middle of the zone pitch by Kuma called as a ball! Do you remember that? It's just obnoxious. This umpiring problem is getting out of hand.

Elliot: Friend, sometimes you just have to choose your battles. There's not much you can do about some bad calls in some sport games, ya know? Ya just gotta relax and take life as it comes. Well, look--if you don't want a beer, I guess I'll just have to order yours for myself now, won't I? Hahahahaha--

LL: No, stop. Listen. It's getting really old. I'm tired of this team losing, and I'm tired of them losing games they are supposed to win. These calls might not have changed the game, but they keep happening over and over, and it seems that it's only a matter of time until one of them turns a game. That's worth complaining about. That's worth being upset over. Do you get what I'm saying?

LL: You're not even listening, are you?

Elliot: Oh, I'm listening. I'm listening more than you would think. (leaning in, quietly) I've had a lot of beer today, friend. A lot. Of Beer. I stopped paying attention to this game about halfway through the fourth inning, simply because I couldn't even focus if I tried. Remember when we talked about how the Blue Jays and Mariners have the same record?

Elliot: The universe has ways of working these things out, my friend. And sometimes, all we have is a nice frosty glass and warm stew in front of us.

LL: Maybe you're right. Maybe we are being a little too dramatic about all of this. There are two more games in this series, and if we take those two, going into the series against the Brewers we could--

Elliot: Now who's the one not listening?

1. Tom Wilhelmsen was sent down to Tacoma tonight. Even if Farquhar doesn't end up being the permanent closer, it seems there will be someone named before Wilhelmsen comes back up, which means that job has come and gone for the Bartender. What do you hope his role is when--and if--he comes back?

3. Are you tired of the PED talk? Or is this a conversation we still need to be having?

4. Favorite restaurant within walking distance to Safeco? Looking to try something new next time I drive up.