Joe Saunders helps limit the Astros to 1 run as the Mariners notch 3 in Saturday's victory. 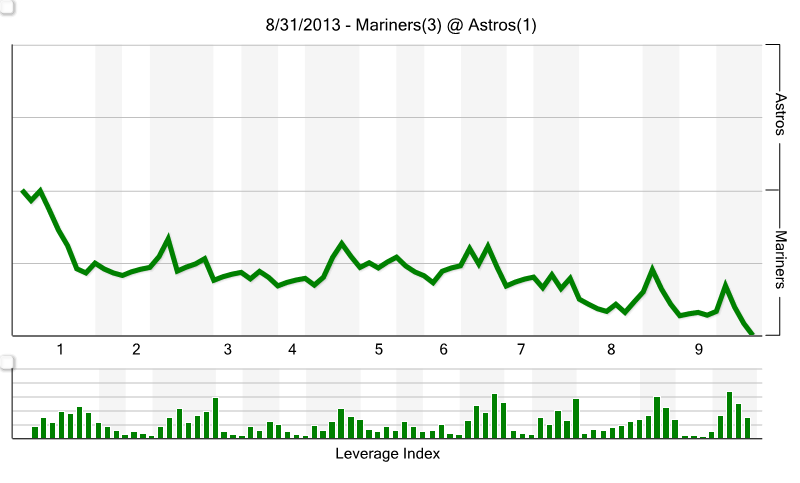 So the Mariners salvaged yet another win against the Houston Astros, which is either a prescient metaphor for all of 2013 or a remarkable statement for the future of a ballclub now battling for 4th and 5th place in an expanded division.

The good news is today's victory came with Joe Saunders on the mound. Joe Saunders--Safeco Joe, who hasn't won a game since August 4th and who has given up 47 hits since. Six of those came today, but Houston's centerfield is as big as the entire landmass of Belgium, and he skirted by with a FIP of 3.97 and generated about 84% of all of his hits as grounders. Joe Saunders is a good pitcher who is having a pretty miserable year, and today at least showed that while he might not strike out 14 in a game, he can manage a win with runners in scoring position.

That, or the Mariners just played the Astros. The Astros outhit the Mariners 8-6, but only coverted one run in the fourth inning. Meanwhile, the Mariners saw all their runs coming in the top of the first after leadoff hitter Brad Miller made it to first, was sent to third by Kyle Seager, and scored on a Kendrys Morales single. The bases were loaded after Raul Ibanez walked, and seconds later, Astros pitcher Dallas Keuchel walked in a run with Nick Franklin up to bat. Then the bearded wonder Dustin Ackley sent Kendrys home from third on a groundout, and the Mariners wouldn't score again.

I hate to say I missed most of this game, but it's true. It's awfully weird to come back to a box score of a win with so many zeroes, though. Kyle Seager ended the night 2-4, and Brad Miller, Kendrys, Almonte, and Humberto Quintero all had one hit a piece, but otherwise it was null. The Mariners ended the night 1-7 with RISP and left six men stranded. But this is the funny thing about all of this: while certain beat writers complained that this was the worst victory of the season, I missed most of the game to watch one of my favorite bands play one of my favorite records (and later watched it all on my phone in the parking lot, waiting to leave). I didn't eagerly await each runner reaching home, because I knew the end result of the game, having seen it on my screen before it happened. But the Mariners won, and ultimately, with all of baseball...that's all that matters. At least for today.

The Mariners still drew four walks and threatened a lot without converting runs. Danny Farquhar notched yet another save--his eleventh. They look to sweep the series tomorrow, and with Iwakuma on the mound, its looking good.

1. Favorite play of the game:

2. What to do with Joe Saunders?

3. If you could see one band play one record in its entirety, what would it be?