Michael Saunders, Erasmo Ramirez, and the Seattle Mariners beat the Baltimore Orioles 8-4 on Saturday. Actually, there were a lot more players involved, but you don't want to read a sentence that long.

Share All sharing options for: 51-59: Mariners decide to win 51 before losing 60 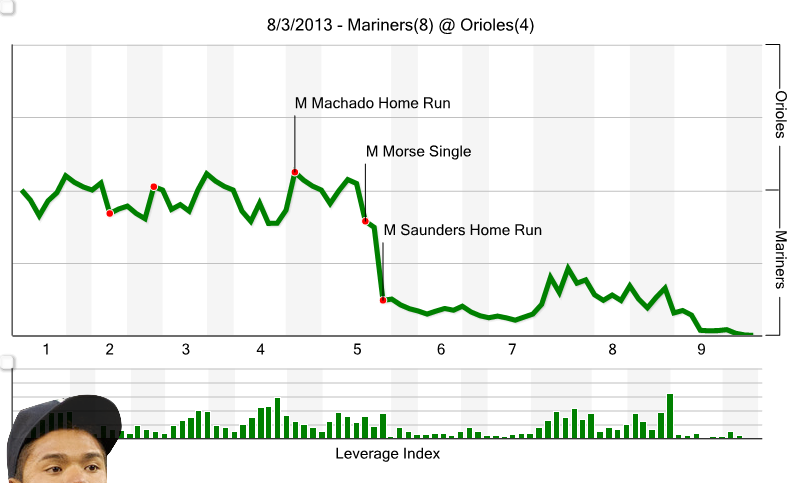 I thought about just typing that for my recap, but I knew I probably needed to put a little more work in. But seriously. Ramirez hit 95 on his fastball and got some of the best movement I've seen from any Mariners pitcher not named Felix Hernandez all season. Either that or Camden's weird centerfield camera angles threw me off a bit. Even if so, he pitched a great game, leaving with a line of 6.1 IP, 4H, 4R (2 of which came after he left the game), and 6K's.

Erasmo didn't give up a hit until Matt Wieters hit a home run in the 2nd inning. Then Manny Machado followed suit two innings later in the top of the 4th. And those were the only hits Ramirez gave up until the 7th inning. Do you remember when we were all whining about Jeremy Bonderman a couple of months ago? We finally got our wish, everyone. The point of this whole thing isn't that Erasmo is going to do stuff like this every start, it's that he is capable of doing stuff like this. Jeremy Bonderman's best performance was against the Astros. Tonight, Erasmo Ramirez handled the Baltimore Orioles, a team deep in a playoff chase, filled with people who know how to hit baseballs better than just about anyone who lives in the entire state of Washington. Take from this what you will. Here's what I'll take: remember that scene from Back to the Future where Marty McFly is trying to get his parents to kiss at the Enchantment Under The Sea Dance, but he starts disappearing in front of our very eyes after that nerdy redhead asshole cuts in? Tonight, from 4:05-6:37 PM, each Jeremy Bonderman memory in my head started to gradually disappear and fade into nothingness with each Erasmo Ramirez strikeout. I got a couple memories left, though, so maybe we can take care of those in the next start.

Ramirez did get into a little bit of trouble in the bottom of the 7th inning, after Buck Showalter came out to complain about a strike that Erasmo got that he probably shouldn't have (pitch 2): 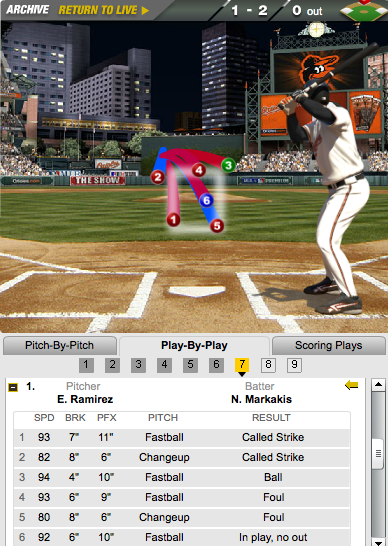 It's possible Ramirez got thrown off a little here, which I'm sure was half of Showalter's goal when he walked out of the dugout to turn his face into a beet topped with graying orange hair. But it worked--and Charlie Furbush had to come in after Ramirez gave up a single to Nick Markakis and a double to Adam Jones. I'm not sure Eric Wedge would have called for a replacement this quickly, which is kind of interesting. I don't know, what do you think?

And this is where we fell into the twilight zone. Furbush got Chris Davis out on a sac fly to Raul that scored Markakis. Matt Wieters followed it up with a single to score Adam Jones, but not before he almost took out Felix in the dugout on a foul ball. The replay showed Felix leaning on the dugout wall like he usually does, as he eyed a ball headed straight for his head. His eyes shot open wide, and he dove backward, falling straight onto the wooden dugout bench on his butt. He stayed there for a minute, wincing and at first looking a little hurt, before cracking a smile coming from the deepest chasms of embarrassment. Felix seems to pride himself on carrying a consistent cooler-than-you attitude, not in a rude way, but in a I'm-the-best-pitcher-in-all-of-baseball kind of way. So to see him rolling on the ground, hat off, incredulous, was kind of great, just for the novelty of it all. Come on, you laugh when your best friend does something stupid. That's what this felt like. As long as he's not hurt. Please. Please don't be hurt.

Then after Wieters reached, and Henry Urrutia flied out to Raul, Ryan Flaherty came up to the plate. In the middle of his at bat, Wieters took off for second, getting a pretty good jump. Quintero got in position to get the throw off, seeing Wieters running before the pitch came, and proceeded to throw a 45 degree rocket into centerfield that Nick Franklin somehow managed to track down. It wouldn't matter anyway, as Flaherty ened the inning with a groundout, but holy cow, Nick Franklin. Holy cow Humberto Quintero. One of you is a rental, and one of you is going to be here a long time. I'm just glad both of you chose to be on the right end of this exchange.

Enough about defense and baserunning. How about offense? Actually, no. Lets talk about Michael Saunders. Michael Saunders is wonderful. He's from Canada, and grew up playing high school baseball on a team called the Mariners. He hit two home runs today, a 3 run jack in the 5th, and a 2 run shot in the 9th inning. I love 9th inning home runs. Granted, a 6-4 lead in the 9th is by no means a safe bet. Hell, if we learned anything from that series in Boston this week, a 7-2 lead isn't even safe. But a dinger in the top of the ninth inning holds a very unique value in games like this. Fans holding on, hoping for a late 9th inning surge. Nah. Screw it. One swing of the bat, and they head for the exits, and that's kind of fun to watch on tv. Condor has had a few rough patches this year, but if he keeps doing stuff like this, which I think we all know he can do, we have very little to worry about. Well, very little to worry about for one position on our roster. But one day at a time, right?

But it wasn't just Michael Saunders tonight. Brad Miller went 3-6, and could have been credited with a 4th hit after a force out on a shallow outfield pop up. Justin Smoak hit a solo home run in the 2nd inning and finished the night with 3 hits. Michael Morse and Kendrys each had 2 hits, as did Quintero which I'll take handily, but hahahahahaha. And in the bottom of the 9th, we got to test out Robby Thompson's closer by committee with Danny Farquhar, who I was a little surprised to see, as Chris Davis and Henry Urrutia are both lefties, and Oliver Perez is Oliver Perez. But Farquhar struck out Davis and Wieters with ease, and got Urrutia to just barely fly out to Michael Saunders. I'll take it. After the game, Bill Krueger shouted in shock over Farquhar's pitch arsenal and recent performances. He was incredulous. "Where did this guy come from?" Well, Bill, he was traded from the New York Yankees in the Ichiro trade last summer. Or if that's not enough, he came from Toronto after getting drafted there in the tenth round of 2008. Or fuck it, if you really want to go there, he was born in Pembroke Pines, Florida. He's from Florida. That's where he's from. I don't know, just watch the man pitch, he's been here since May.

The other fun part of this game came in the top of the 8th inning. Nick Franklin was on second, Kendrys on first. Raul hits a deep fly ball that bounces off the right field wall, and Franklin bolts it for home. The Orioles manage to get the ball back as quick as nearly anyone could, and is called out on a slide that was questionable to say the least. In the middle of all this, Kendrys stays at second, knowing the ball is in the infield. Raul Ibanez, 41 year old veteran, takes off for second since the attention was at home. Of course, somewhere along the way, his eyes met Kendrys, standing between second and third with a quizzical look on his face. Raul stopped dead, backtracked as fast as he could, but was thrown out at 1st to end the inning on a 9-4-2-3 double play.The camera cut to Robby Thompson and Jeff Datz standing in the dugout, staring into the abyss. Their eyes were hollow. They didn't move. Neither did I. But that's because I was relaxing in my office chair, not playing baseball.

1. Orioles two-tone hats. Thumbs up, or thumbs down?

2. Assuming this closer-by-committee doesn't last all season, who would you rather see in the role? Farquhar, Perez, or someone else?

3. Top free agent you want to see Jack target in the offseason?

4. I have been having an inordinate amount of obnoxious fruit flies in my apartment lately. It's an old building, built in 1914, and the windows don't have screens. It's also hot and I don't want to shut my windows all day. Does anyone know how the hell I can get rid of them without filling the air with a bunch of chemicals that are going to kill my dogs?