Taijuan Walker will be making his Mariners debut on Friday. Here are the ramifications, and why you should be excited even if you don't agree with the decision.

Share All sharing options for: Taijuan Walker promoted, will start on Friday

Here comes the Fresh Prince. Taijuan Walker will be making his Mariners debut on Friday, filling the spot vacated by the recently departed Aaron Harang. We've covered Walker's season fairly extensively on the site, so by now you should be fairly familiar with what the Mariners are getting. One of the best pitching prospects in baseball, Walker has an effortless delivery, is an outstanding athlete, and has had a very good year between AA and AAA. He's one of the few pitching prospects in baseball with a true #1 ceiling. Walker just turned 21 years old a few weeks ago, has a 3.61 ERA in AAA, and despite some recent struggles with command is still missing a ton of bats.

Walker has an innings limit of around 160, so when Zduriencik mentioned the number earlier in the week, people started to speculate that he could get the call, with Tacoma out of the playoff race and Walker sitting at 141.1 innings. Walker is going to get two or three starts in September, and he'll hang around the big league club for the whole month, starting his service time clock.

Promoting Walker now means several things. First, it starts his service clock. He'll eat up a month of time by being around all September, even if he only makes two starts. Any hope of the Mariners trying to squeeze an extra year of service time out of him is a lot less likely now, as they'd have to keep him in AAA for a month longer to get that extra year on the tail end of his club control. If Walker is getting promoted now, the Mariners likely want him ready earlier than that schedule in 2014. You can probably forget about the Mariners going the Wil Myers route of control with Walker now. There's a popular argument that club control won't matter with Walker if he's good enough, and that the Mariners will pay him if he is, extending him. I don't think you can assume that. There's a lot of value tied to club control, whether it's playing for the Mariners or for another team in regards to a trade. It also affects timing and structure of a contract extension.

Walker's promotion also means that a 40-man roster spot has now been permanently filled right before the offseason. While the Mariners have a ton of departing players, 40-man spots are still a premium to have right before player acquisitions begin, and it's one less available spot the Mariners can use. It probably won't matter, but that's not really the point.  These are the kind of decisions that can set off a chain of events that comes back around. Sometimes seemingly harmless things don't matter until they matter. Following a smart process will minimize your chances of getting burned or having "unlucky" things happen to you. The Mariners haven't been particularly good at this over the Zduriencik regime, especially with the 40-man roster. It's almost certainly not a big deal. But it could be some sort of deal. 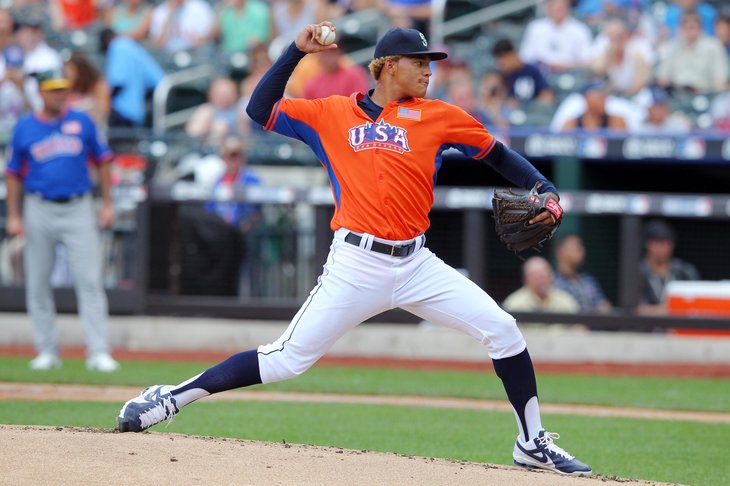 The Mariners top pitching prospect has been generating a lot of buzz in his two stops in the minors this season, but the cautious path that Seattle is taking with the young right-hander bodes well for his future.

It also means that Walker will get some big league experience before the team attempts to take another step forward with him in their plans. He hasn't been as sharp as he was earlier in the season, and I don't expect things to suddenly correct themselves. His secondary pitches need work, his command isn't entirely sharp. He's running out of steam for the second year in a row. But he gets to face the Houston Astros and the Kansas City Royals, both on the road. If he gets three starts, he'll finish up against the Astros in Seattle. They're not the most high pressure situations, and Walker will get used to life on the road before he settles in at home, where he'll mostly be absorbing instead of pitching.

I get why the Mariners are doing this. Even though it's fast, Walker's had an excellent year, and his stuff is good enough to compete right now. He's a special talent, and the Mariners want to get his feet wet before he goes out in 2014. At this point, I expect Walker to break camp in the rotation next year. The team isn't wasting any time with their young players anymore. Walker reaches the majors before Danny Hultzen and James Paxton. Baseball is weirdly wonderful and unlike anything you expect it to be.

I have a hard time saying this is the right move from a purely analytic standpoint, given the club control and 40-man roster considerations. I'd rather the Mariners have waited until next year to promote Walker, but the Mariners are done being conservative, and jobs are on the line. The team is playing like hot garbage right now, and Walker brings something new and shiny. There's plenty of positive things that can come from a September promotion, but most of them are unquantifiable. Everybody's personality is different, and if the Mariners trust that this is a personality that will benefit from the experience, so be it. They're in a better position to judge than any of us.

Walker is the organization's best pitching prospect since Felix Hernandez, and he's going to pitch in two days. Whether you agree with the decision or not, it's going to be really, really fun. A new era has begun in Mariners baseball. Go get it, Fresh Prince.