Dustin Ackley has been using a ton of pine tar, and it's probably illegal. Here's a look at how this discovery was made, and the math to explain it.

Perhaps you've noticed that Dustin Ackley is hitting again. He's running a .330/.361/.473 line since the All-Star break, and while that's in basically a month's worth of games, it's still encouraging. He's been aided by a .387 BABIP, but even normalized there's encouraging signs of life. Yesterday was exceptionally encouraging, as he finally hit another homer and also ripped a double. Both felt like the first pitches Ackley has seen inside enough to pull for months. Or years. He's been more aggressive with the outside fastball and as a result isn't walking as much, but it's hard to argue with the results. Colin looked at this last week, if you missed it.

That's all well and good, but have you seen Dustin Ackley's bat?

Yesterday while watching the replay, I noticed just how absolutely crazy the level of pine tar has gotten on Ackley's bat. 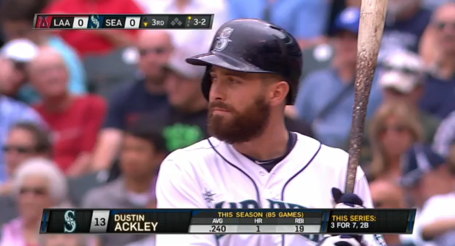 That's crazy, right? Still, this view obscures just how much of the bat is really covered by pine tar, so let's get one with the whole bat. 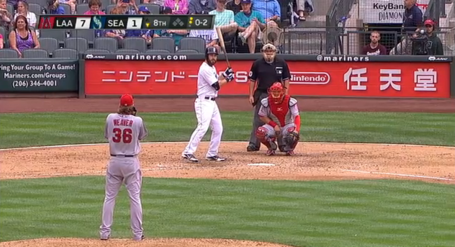 That's a lot of tar.

Ackley previously used a black bat, and I'd never noticed it before. I looked for a close up of his bat before he switched, and the best look I got was this one, back in May. It doesn't look like there's any pine tar. 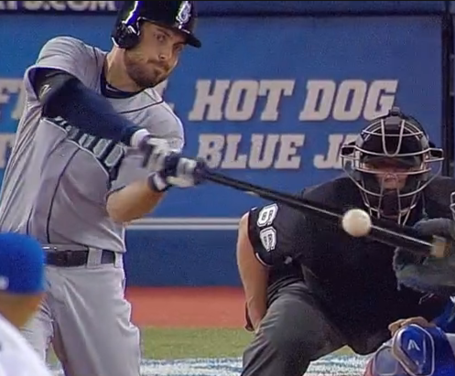 Not only has Ackley switched bats, but he's started using an absurd amount of pine tar. In fact, I am pretty sure Ackley is past what he's supposed to have.

Rule 1.10(c) of the 2002 Official Rules of Major League Baseball states that batters may apply pine tar only from the handle of the bat extending up for 18 inches.

18 inches isn't all that far, and while I don't know exactly how long Ackley's bat is, let's assume it's about average, at 34 inches. Using math(!) the pine tar should extend just beyond half of the bat length in total. 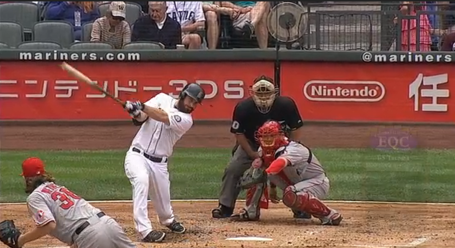 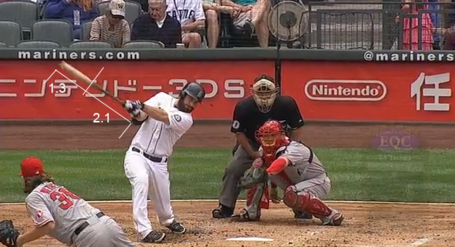 It's safe to assume Ackley doesn't use a bat longer than 34 inches, though that would actually make the violation even worse. Even If Ackley was using a shorter bat, he'd still be violating the rule. On a 32 inch bat, the acceptable ratio of pine tar is 18/32 - .563, or 56% tar. Using the previously measured ratio, Ackley would still be at nearly 20 inches (62% x 32 inches) of pine tar, still breaking the rule. Ackley would have to be using a 29 inch bat in order for this level of pine tar to be legal. Dustin Ackley is not using a 29 inch bat.

I cross-referenced this discovery with other pictures, and while some of them produced slightly lower ratios (56%), I had to make greater estimates as to where the handle began, like in the picture used for the article. Even with a far more conservative estimate, Dustin Ackley is still violating the rule if his bat size is over 32 inches, and he's tied with it at 32 inches.

While this post was put together with screenshots, photoshop, rulers, and middle school math, it seems evident to me that Dustin Ackley is beyond the allowed amount of pine tar. This year was the 30 year anniversary of the pine tar incident. Ackley doesn't seem like the type of guy who would go off the rails like George Brett if he was called on it, but he might blink a few times and get a new bat.