But something about Greenlake makes it special, and one of my favorite things about Greenlake is the way that you can catch random snippets of other people's conversations as they walk the opposite direction:

It's fun to try to figure out what the conversation was, how intelligent the speaker is, and sometimes even create full conversations based on what they share, almost like they're each telling a line of a story.

I bring this up today because unfortunately I missed like all of this game. I asked Scott if he wanted another recap done. He said, "Sunday," I said "Great!" and then it ends up that I had to move last minute and wasn't able to see the game or take notes. Instead, with the radio on I heard what I could while moving boxes and furniture and tried to piece together what happened:

That's pretty much it. I also only have 10 minutes to write this whole recap. I asked Scott if I could write the recap because I wanted to write a great post, and instead I'm going to turn in the worst recap in the history of Lookout Landing. Sorry about that. To the dots!

The Mariners are doing poorly, and the talk radio that came on after them seemed to discuss their current woes as though they were hopeless. While I freely admit that I don't have much faith in the front office, the one thing that I do not feel about this team is hopelessness. These are a lot of likable players and Ackley, and for the first time in several years and/or the start of 2012, this is a group of players I could at least see myself happy to root for, no matter how they do. 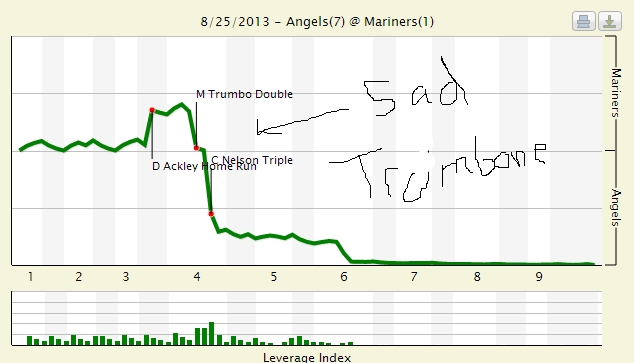