Share All sharing options for: 59-68: Mariners BABIP into failure, losing 2-0 to the Angels 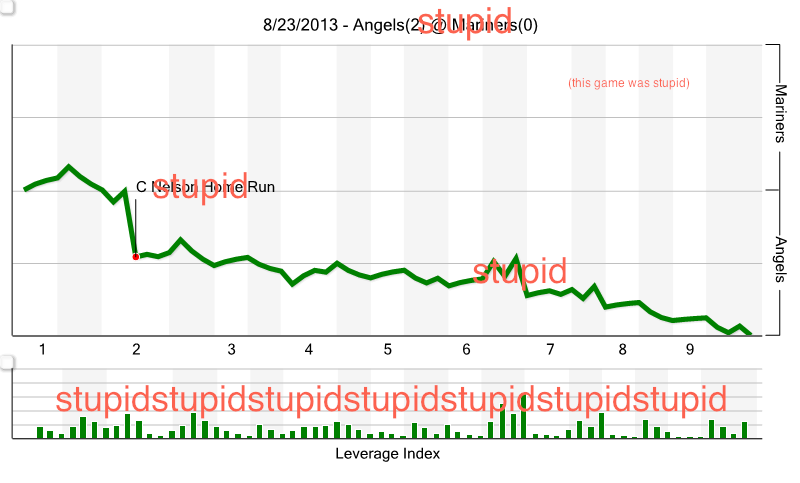 Do you know why this game was stupid? This game was stupid because Felix Hernandez pitched six innings and had 10 strikeouts, pushing him ahead of Clayton Kershaw on the MLB strikeout list, now behind only Yu Darvish. Felix drew an absurd number of swinging strikes and had great movement on his curveball. Look at this strikeout from Peter Bourjos in the fifth: 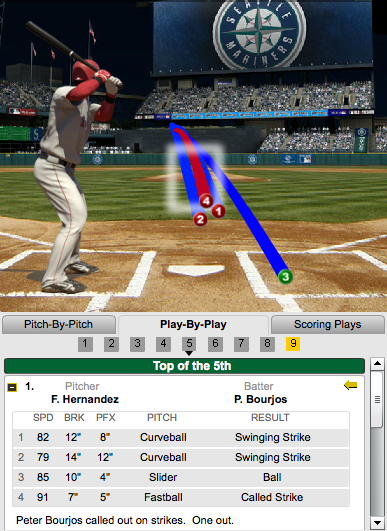 What you are looking at is not stupid. What you are looking at is beautiful, because what you are looking at is designed. That's an amazing sentence to be able to say when talking about something as random and erratic as the game of baseball. This strikeout is a piece of art by an artist named Felix Hernandez, and it looks exactly like he intended it to look. Two curves on the corner, throwing Bourjos off, with laser precision. A slider down and away to either luck into a swing and a miss, or to draw the hitter's attention away from the zone and expand his peripheral conception of the plate. Then, returning to the fastball in the exact same spot as the first two curveballs, but stared at because Bourjos is still thinking about the third pitch. Art. Beauty. The sublime. Not stupid.

Look at this strikeout of Mike Trout, who is a decent baseball player: 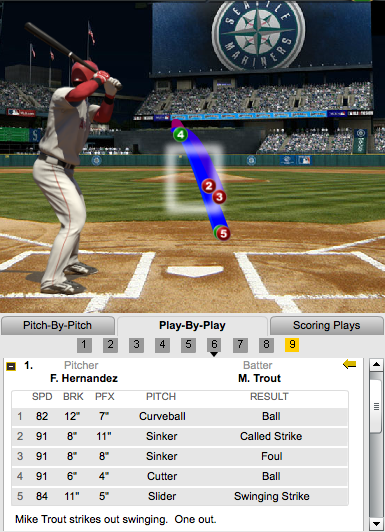 Remember Wednesday's screengrabs when Iwakuma couldn't hit the zone? These are pitches 93-97 from Felix. His two-seam fastball is still painting the corners with acute precision (2-3), and his curve and slider to open and close the at bat are like re-placed pins on a bulletin board. This game was stupid because Felix did all of these things and made one stupid mistake and it cost him the entire game:

Felix gave up a home run to Chris Nelson in the second inning. Chris Nelson had two home runs at 7:30 pm tonight. Now he has three, and one of them came off Felix Hernandez. This is why this game was stupid.

And to be honest, I hesitate even calling it a mistake. Look: 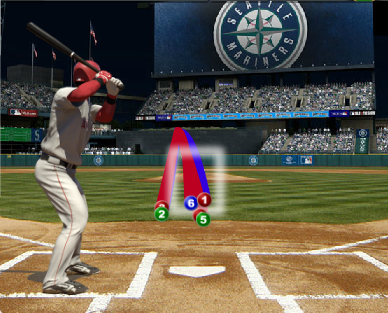 For a fastball, it might have hung a little high. Maybe he wanted it down where pitches 4 and 5 landed, but I don't know if that's the case. Stupid. And not to rag on Chris Nelson--I sure as hell would never be able to get a hit, let alone a dinger, off Felix Hernandez. But this just kind of happened. Chris Nelson has had 211 plate appearances this year, and has only notched a hit in 45 of them. These may not be endearing numbers, but Nelson is apparently good enough at baseball to keep a job at the game's highest level, so it was really only a matter of time until he hit another home run. It just so happened that it came off Felix Hernandez. Here we have two perfectly illustrated examples of baseball's meaningless chaos, and its designed efficiency. This game was stupid.

The Mariners only got 5 hits tonight. They never scored. The first came on Richards' second pitch, courtesy of our new slappy leadoff hitter named Brad McDreamy. Er, I mean Brad Miller. Miller had two hits in tonight's game, and while Michael Saunders left with an 0-4 on tonight's stat sheet, he only struck out once. This is a good way to make outs from the hitter in the 2 hole, much better than what Franklin has been doing. I almost wonder if this week off is going to help or hurt Nick Franklin more, but at the very least, it forces Eric Wedge to mess around with new options in the order--though it's entirely possible that a lineup shakeup was in order once Wedge took the club back from Robby Thompson anyway.

Also of note was Dustin Ackley's at-bat in the top of the eighth inning. the Angels sent Richards back out because what else would you do when your pitcher is rolling over hitters with a low pitch count? After looking at a couple of fastballs, Ackley whipped a slider back into Richards' elbow, and still was thrown out on the play. Its impossible to say what would have happened had Angels' shortstop Erick Aybar not been able to get the ball to first as quick as he did. Richards ostensibly would have remained in the game. Maybe he was starting to lose it a bit.

But of course, who knows. Dane De La Rosa came in fresh from the bullpen and sent Henry Blanco and Brad Miller back to the dugout and the game was only in question one more time. Kendrys Morales battled through a noble at bat in the bottom of the ninth with two outs, bringing Raul Ibanez up to the plate for the tying run. Woooooooooooooooo....Rauuuuuuullllllll....I'm not going to even finish describing this scenario because it should be obvious what happened.

Yes, the Mariners wasted another one of Felix's starts, and while it always hurts to say that, it is unfortunately a thing that we all have gotten used to. But at least we have a Felix to ruin games for. And we are going to have a Felix to ruin games for for a long time. That isn't stupid. That's fucking awesome. Well, maybe not the ruining games part, but one thing at a time.

I always wonder what goes through his head when he sits in the dugout, arm wrapped, watching the 0's pile up on the hand operated scoreboard above Raul Ibanez in left field. Why does he want to stay here? Has his agent not informed him that the reserve clause was done away with before he was even born? Perhaps he's a masochist. Or he has taken a liking to sabermetrics and wants to illustrate the futility of pitcher wins and losses as an evaluative statistic. I don't really know.

But on days like today, I kind of feel like I do when I do something to piss off my wife or my friends and they come back later to tell me it's okay and they still like me. That's what today felt like to me. It was a stupid game. It was dumb baseball. But tomorrow, Felix is going to be in the dugout playing some practical joke on Endy Chavez and grinning with his hat turned crooked and jersey untucked and he is going to be smiling like he just won the goddamned lottery. Tomorrow we'll watch baseball, and when we see Felix it will be him telling us it's okay, and while it doesn't do a thing about changing today's game, it's a whole hell of a lot better than throwing a fit in the dugout, or demanding a trade, or whining to the media.

I don't understand you, Felix. We don't deserve you, Felix. But we have you, and you have us, and nothing is going to change that for a long, long time. Let's keep it that way.

1. Do you hope the M's bring back Wedge next season?

2. If price wasn't an option and you were buying Mariner season tickets, where would you choose to sit?

3. If you could eat at only one restaurant for the rest of your life, what would it be?

4. Do you still have a landline phone?