A quick look at Dustin Ackley, the outer half and aggressiveness

Dustin Ackley went down to Tacoma, and he appears to have noticeably changed his approach. Has that been the difference in his recent success? Well...

Share All sharing options for: A quick look at Dustin Ackley, the outer half and aggressiveness

When players enter the majors and succeed, even moderately, it makes sense to be calm in our enthusiasm—or at least try to be. While we didn't really do that with Dustin Ackley—or at least I didn't—his lesson has served as an example in tempering enthusiasm when it comes to the likes of Brad Miller and Nick Franklin. What we're seeing now isn't what we'll always see, as we're told we have to wait until pitchers develop a "book" on hitters, and then see how the hitters adjust to the adjustment.

There is no book on Dustin Ackley. It's a single almost-blank piece of paper with three words in 12-pt font in the middle of the page, probably in plain Helvetica: Pitch him away.

I'm sure there's more, realistically, because of course there's more—but does there need to be?The consensus built over his struggles has been that he'll either take it for a strike or make an easy out. It's the former there that's always bothered me, as it seemed like while he was taking too many pitches for strikes, the umps were doing him no favors by not giving him the same calls I believed more established hitters were receiving.

Related sidenote: how laughably absurd is it that "the lefty strike" still exists? It's been documented, it's easy to see while watching the game and yet it's never been made a point of emphasis? Never corrected?

I don't think we fully appreciate how much umpires can mess up and influence games with single ball and strike calls. We try to, or we think we know, and maybe we do—but do they? And do they care? Why are they not watching film and cleaning this up? Before this gets too rant-y, some numbers before visuals. Here are some combined numbers for Ackley from 2011 and 2012, before whatever this year has become. Notice the difference a single call can make.

With this in mind, I set out to examine just what Ackley was seeing on the outer half, in terms of balls and strikes. My mind was loaded with the strong belief that a non-insignifant part of Ackley's struggles could be attributabed to his strike zone, which I thought was influenced greatly by the lack of respect given to him by umpires as a struggling young player. (Spoiler: not quite).

Dustin Ackley and the called strike away

From Baseball Savant, here's a look at Dustin Ackley's heat map for called strikes off the plate away for his career: 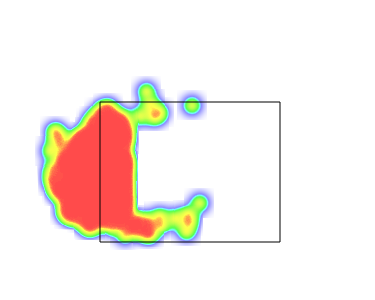 It looks about what you'd expect. Not surprising, but not entirely fair either. If you're interested in seeing what these look like for the rest of the Mariners (for 2011-2013), you can find them here. And, when you look at somone like, say, Raul Ibanez, you may think what you're seeing is quite damning.  But the thing I quickly realized is that the heat maps are created based on frequency of outcome—not rate.

So in further investigation I sought out batters who, over the same timespan produced roughly the same number of plate appearances (Raul did) but also swung at pitches outside the zone at roughly the same rate as Ackley (Raul did not) while—hypothetically—were worthy of a bit more respect than Ackley had earned. 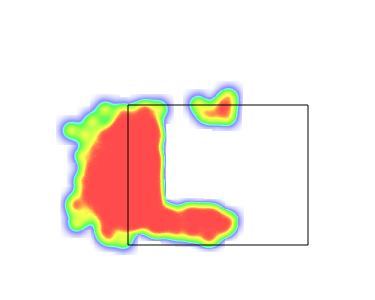 Mauer's taking more pitches at the top and bottom of the zone, but when it comes to pitches away, Ackley doesn't have it any worse than a hitter who's been much more productive. The same holds true if you look at the similar Jason Kipniss and Adam LaRoche. Even Prince Fielder gets a lot of calls off the plate—though it is over more PAs and pitches there. If you're interested in everyone, you can find the list and query here (if someone wants to dig deeper, prove me wrong, whatever—feel free).

So while this is entertaining and the graphics are visually appealing, ultimately, there's nothing there.

What Ackley's done recently, around the strike zone

This, this is where you start to see something, especially when it comes to trying to figure out what Ackley's changed since his time down I-5. I'm sure it's been cited numerous times, but Dustin Ackley's line since his call-up is at .272/.319/.360, and while that's not great, his line since the break is at a slightly better .309/.345/.407.

So, what's changed? Has anything changed? Well, maybe. Kind of.

Dustin Ackley was sent down to the minors to work on his aggressiveness, and while his swing rate remained relatively unchanged during his stay down there—and may have even gone down—I wanted to take a look at what he's done since he's come up, especially with the troublesome pitch on the outer half. The sample, naturally, is small. So while it may not be predictive, it doesn't mean it didn't happen. Below are graphics for things that happened, some recently.

Here's a look at Dustin Ackley's swing rate around the zone, from Brooks, for the beginning of his career through his call-up: 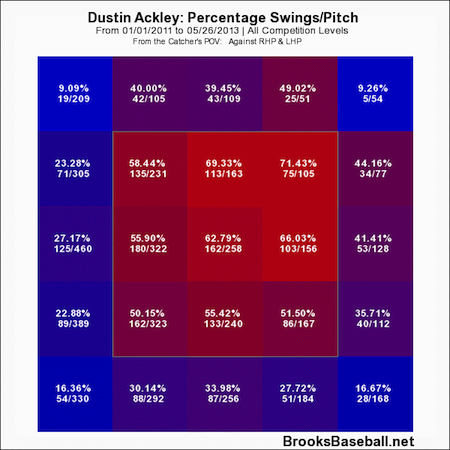 And here are Dustin Ackley's swings since his call up: 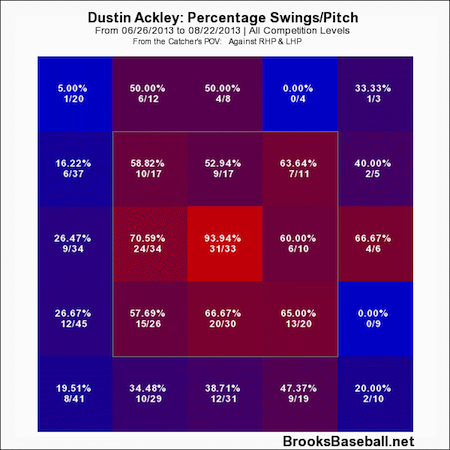 ♫Do you see what IIIIIII see?♫

And the most noticeable part: on pitches in the middle of the plate, his swing rate has climbed 30 percentage points from 62.79 percent to an almost-absurd 93.94. Since he's been called up, Dustin Ackley has not swung at exactly two pitches right down the pipe.

Also, you can see he's swinging noticeably less than he was previously at pitches up and in. If I were to guess here, it looks a lot like Ackley is adjusting to the adjustment—he's guarding strongly against pitches away at the expense of the stuff he used to hit, but still going hard after everything down the middle.

Though, while I wanted this to build to some fantastic conclusion linking this new approach to newfound success, I just can't. Ackley's batting averages around the zone, particularly away, are considerably worse now than they were previously—when he was consistently bad.

So, concluding—what's changed with Dustin Ackley? Well, his approach certainly has.

Is that what's made the difference recently? I have no idea.

This is the world of Dustin Ackley.