At the moment I write this, Ichiro Suzuki has just hit a grounder past the glove of Jay's third baseman Brett Lawrie for his 4,000th career hit in professional baseball. This has nothing to do with today's Mariners' game against the Oakland Athletics, where they hit two home runs and watched Brendan Ryan knock in three in a 5-3 victory. It doesn't necessarily have any place in a conversation about Brad Miller or Dustin Ackley, or even Henry Blanco for that matter. But just look at this (courtesy Mark Sandritter) and tell me that little cubby in your heart shaped like the Mariners' logo isn't filled with joy right now:

Ichiro Suzuki only got to play postseason baseball with the Mariners once, but after all is said and done, his impact as a player on this franchise might only be second to Ken Griffey Jr. Remember all that hubbub around here and Safeco a couple of weeks ago? That's coming for this guy up there.

And today? Well, yes. The Mariners played the Oakland Athletics, and won. They also won last night, and come back to Seattle tomorrow with a 5-4 record on their road trip played against three of the five teams currently holding playoff spots in the American League.

And it was actually a great game, too. The A's jumped on Iwakuma quick today, when Coco Crisp jumped on Iwakuma's first pitch for a solo home run in the bottom of the first. Then Jed Lowrie hit a triple that dusted the tassles on Michael Morse's glove in right field. The ball rolled and rolled, and gravitated to the trajectory of the concrete lip of O'co's right field wall like it was a magnet. Wait, that's not accurate. Like Michael Morse was the negative side of a magnet, pushing the ball away from himself? Yes, that's better.

But Morse quickly reminded us of why Mariners brass wanted to sign him in the first place, slapping an A.J. Griffin slider past the outfield fence to tie the game at 1. It was also only his second home run since May 27th. Now granted, he spent part of that time in Tacoma. But just read the first paragraph I've written on this page and then come back. Done? Okay, let's continue.

Iwakuma fell into a little bit of a rut in the fourth, giving up a home run to Brandon Moss, a double to Yoenis Cespedes, and finally a single to Josh Reddick. Alberto Callaspo came in to sac fly Cespedes home, and Iwakuma would finally get out of the inning a few moments later, making it 3-1 A's. Iwakuma's home run problems this year started in Oakland, and while they followed him through the early days of summer, it never seemed to be a command issue. Today, it was command. Here's Moss' home run: 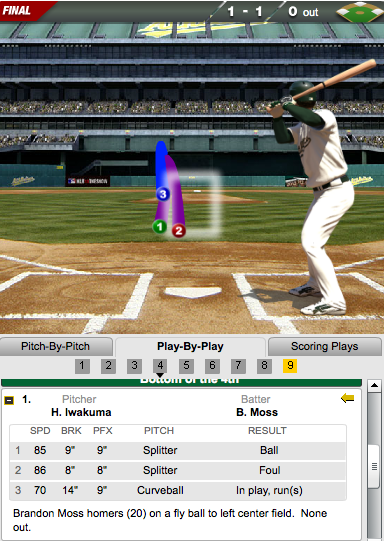 Not quite what you would call a mistake, and while home plate umpire Chad Fairchild was squeezing him a little bit, you know he wanted this first pitch for a lefty strike. This curve that was hit for a homer wasn't bad, but you know he wanted this to fall lower than it did. Still, it was only the fourth inning. The next two hits came on the first pitches, so this was mostly the A's being aggressive--they are holding the last wild card spot, after all. But look what happened when Kuma got a little deeper into the game: 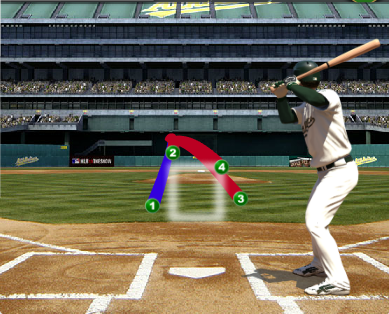 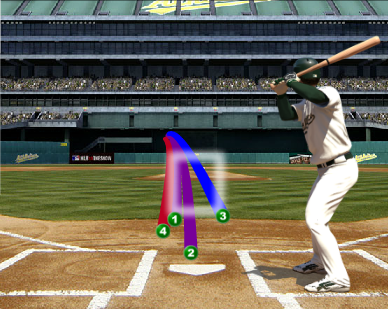 Sogard's fourth ball could have gone either way, but this is a tired pitcher who just cant hit his spots anymore. Each of these pitches look like they just need to sprout arms and reach for the corner of the strike zone like a little kid trying to touch tree branches out of his mom's car. And the second pitch in Crisp's at bat was wild, advancing Sogard to third. It was a splitter, not a curve.

But then Iwakuma got out of a jam when Brendan Ryan made one of the last Brendan Ryan plays we could get for the rest of the year. Ryan snagged Lowrie's grounder, and looked at second base for just a split second. Brad Miller was waiting for the throw, glove open, knowing it was the only play as Sogard was halfway home. But Ryan darted the ball to Blanco, and it lapped Sogard to meet Blanco's glove, who somehow positioned himself on the third base line and got Sogard caught in a rundown, tagging him moments later. It was lucky, if and only for the reason that Sogard started to question his run home once Ryan caught the ball, which is the real reason he was tagged out. But it didn't matter. Blanco stood with the ball in his hand, his 41 year-old knuckles gripping it like a weapon confiscated from a murder scene. He held it high. Hat backwards. Mouth upturned with a snarl. His 1994 tribal tattoos started to morph into a badge of honor, and his knee-high pants which suggest the frame of a younger man stepped over the scene where Sogard was tagged out. The chalkline. The glare. I think I like Henry Blanco. 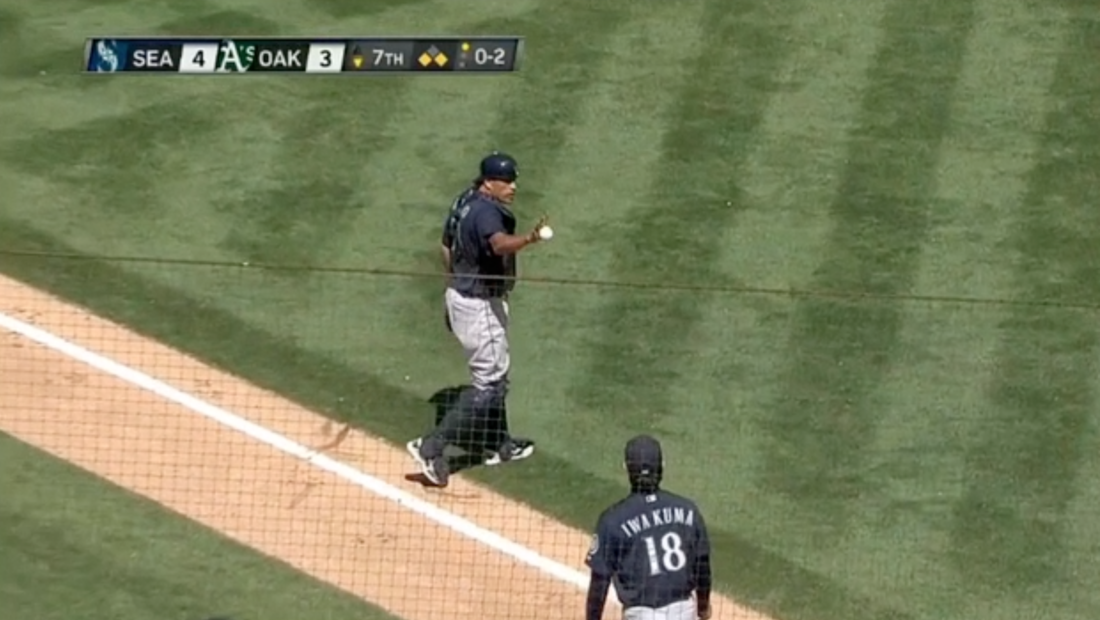 Other than Brad Miller's solo shot in the fifth, the real story was Brendan Ryan. In the top of the sixth, Morales watched five pitches from Griffin before walking to first base. Smoak and Morse proceeded to strike out, but then Dustin Ackley walked, sending Kendrys to second base. You would forgive most of us we said Brendan Ryan batting with two outs and two on isn't exactly the sexiest thing in the world, but then again, you didn't ask Brendan Ryan, because he promptly whacked a double down the third base line which was deflected by third baseman Josh Donaldson's glove, locking it in the limbo of the gigantic O.co foul territory. This was the key--because as Kendrys had already scored, walking back to the dugout with Ryan's bat in hand, it gave Ackley the impression he had enough time to round third and head home. The throw beat him, but he bent his knees and took out A's catcher Stephen Vogt, who thankfully remained in the game after a similar play last night took out A's catcher Derek Norris and Nick Franklin. Collisions and injuries=bad, even if it means sneaking the winning run across the plate.

The Mariners upended their guilty conscience in the eighth, putting an insurance run on the board from...yes, again, Brendan Ryan. It was another A's bullpen wart, as the 18,000 fans at O.co watched Jerry Blevins walk Justin Smoak, then see Dan Otero give up a single to Michael Morse, luck out with an Ackley forceout, and then hang a curveball just four inches too high to Brendan Ryan, who scored Justin Smoak. 5-3 Mariners.

Speaking of Ichiro, his trade return tallied his ninth save by striking out the side. His cutter moved between 88-89 and he tapped out at 94 with his fastball, but his curveball was unhittable, spreading his velocity an almost even 20 miles down to 75. I'm still afraid to push my chips and buy all in here, as I'm sure its only a matter of time until hitters start to get used to him like they did to Tom Wilhelmsen and Brandon League and I'm going to stop thinking about this now. We have a closer again, and he's amazing. All hail Lord Farquhar.

It's Felix day on Friday and hopefully it will look nothing like his last start, which we don't have to talk about here. But we can talk about the Angels, who will be in town to face the King, and hell, if you want to feel good about something, feel good about that. Sorry, halos. You really have to give us this one.