Sonny Gray goes through seven great innings, but the A's bullpen surrenders to the Mariners in the eighth, blowing a 4-2 lead. Nick Franklin goes 2-4, but lacerates his knee, requiring stitches.

As we move into the dog days of mid-August, the wonderful "meaningful baseball" phrase is beginning to be espoused from the mouths of baseball fans and writers from here to Miami, Florida. But I have a question: What if there was a way to know in 2002 that the Mariners would spend the next 11 years not reaching the playoffs? Wouldn't that make every single one of those games meaningless baseball? Why watch any of them if they ultimately wouldn't matter for the franchise's postseason hopes?

I say this with all due respect to tonight's game. At 7:33 pm, Joe Saunders was promptly tossing underhand pitches to Yoenis Cespedes and wondering why the A's suddenly had 4 runs on the board. I knew I had to write somewhere around 1,000 words about the ensuing baseball game but I seriously debated whether or not I was going to stick through the whole thing. I mean honestly, we've seen this Joe Saunders so much this year, and I have four movies from the rental place due back tomorrow and I've only watched one of them. Besides, it's "meaningless baseball."

And wouldn't you know, but these assholes decide to come out and win a game of baseball, handily, against a division rival that was 1 game out of first place two hours ago. The Mariners had the bases loaded twice tonight. The first time was in the eighth inning, which was about thirty-nine minutes of A's malfeasance that looked a lot like a game of Operation with a baby who just ingested a pound of pure cane sugar. The second was in the ninth, and although they didn't end up delivering, who really cares, it was 7-4 and Danny Farquhar was ready to pitch, and I don't know if you've heard, but he can throw a baseball.

Even better, Farquhar struck out two of his three batters in the ninth, making his case as a real "closer" ever more evident. Now, I'm not sure if a "closer" is even a thing we should be naming, especially when a 7-4 ninth shouldn't probably be a save situation. But I'll take some strikeouts over lucky BABIP any day.

Nick Franklin had a good night, going 2-4 with a third inning home run. Let's check it out: 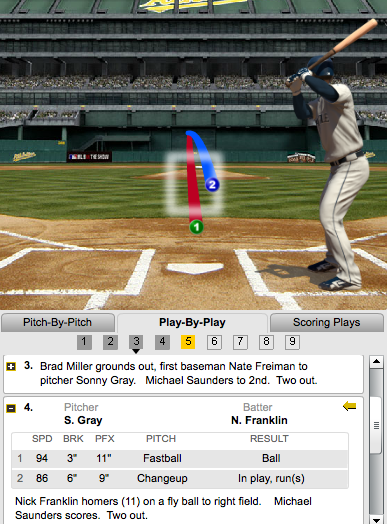 Without even looking at this, we should be excited that our slumping second baseman of the future hit a home run tonight. But even better? He hit it off of a Sonny Gray changeup. No curve, no break, but still--making contact on anything other than a fastball is always a great sign for Franklin, and though his other two contact swings were on fastballs, let's celebrate this. Now the bad news? In the middle of that eighth inning meltdown, Franklin snuck home under Derek Norris' tag on a fielder's choice attempt. His knee snagged Norris' cleats, tearing his pant leg open and sending him to the infirmary for 5 stitches. Ow. Norris had to leave the game too, but thankfully it sounds like nobody was really hurt. Still, it's obnoxious after a couple of great at bats from the guy who has had so much trouble.

But man, that eighth inning. As awful as it's going to sound, this might have been more a case of an Oakland bullpen meltdown than some inspired Mariners' late game rally. Starter Sonny Gray had a good game through seven, striking out 7 Mariners and only giving up 2 hits. So yep, thanks, pull him and let the bleeding start Mr. Melvin. First Michael Saunders singled (who reached base in all of his four plate appearances by the way). Next, Henry Blanco comes up to the plate and slaps a deep drive to left into Yoenis Cespedes' glove, except it fell out, sending runners to second and third with no outs.

And unlike yesterday, the Mariners actually did something with it. Brendan Ryan came in to run for Blanco and the bleeding just continued. On. And. On. I had honestly given up at this point, so this was quite a welcome surprise. And the best part? It was mostly from people who are probably going to be here next year. Miller singled in Saunders, Franklin singled in Ryan. Kyle Seager walked to load the bases, and then Franklin scored on the aforementioned injury-causing grounder from Kendrys.

The A's have a great bullpen. The Mariner's have an alright bullpen. Maybe it's just because we watch more Mariners games than anyone else, but when I think about Lucas Luetge or Felix handing the baseball off to the Tom Wilhelmsens out there, all I can think about is those scenes in the Star Wars special editions where they added the obnoxious rings to all the explosions to make them extra cool and huge and devastating, but ultimately stupid. A lot of A's fans probably left O.co today cursing their bullpen, rolling their eyes at Sean Doolittle and Ryan Cook and Jesse Chavez. And you know what totally sucks? In October they will be cheering those three pitchers on as they play the Tigers or someone like that in the playoffs. Have fun pouting tonight, guys.

In other news, Michael Morse is still broken. I'm absolutely convinced that he is still reeling from his injury earlier in the year after getting hit in the hand with that pitch. After subsequently missing a bunch of games, he has absolutely cratered. Not slump cratered, not you'll get em next week cratered, but Chone Figgins cratered. Now, Morse was never quite expected to be an everyday iron-man guy or anything, but this is bad--really bad. Morse hasn't had a hit since August 13th. Before that he was still 2 for 16. He hasn't hit a home run since August 2nd. Michael Morse is better than this. And obnoxiously, the Mariners are probably going to keep trotting him out for that exact reason, even though he doesn't probably play into this team's future. Meanwhile, Dustin Ackley is still picking his nose in the dugout.

Tomorrow Iwakuma takes the mound and the Mariners can take the series from the Wild-Card A's, which is always good. Even if "meaningful baseball" is over, how different is this really than any June game the team has played in eleven years? I mean...lets say I get depressed and open another beer and put my Dustin Ackley bobblehead in a box and think about changing the channel and text my wife to ask her if she wants to go out to dinner instead of watching the game and pretend I'm not invested in Mariners' baseball when my friends ask me about it and start paying attention to National League games for the playoffs and look at basketball rumors online. Lets say I do those things. I mean, I guess I could have started doing them in May or June, if you think about it. But I didn't. And it's all this damn team's fault. Thanks, assholes.