The Mariners finish up a tough road trip in Oakland, and I catch up with a previous Q&A with Athletics Nation. Also, Sean Doolittle loves the heat.

Three games versus the A's, and the Mariners can stumble home. Concluding one of the most difficult road trips of the year, the Mariners face their third straight playoff (not yet) team on the road, and this time it's in Oakland, where they will play three games before a short trip home for a true day off on Thursday.

The A's are led by Josh Donaldson, who's already accumulated 5 WAR this year, playing a plus third base for Oakland. His wOBA of .371 is identical to Jose Bautista, and his WAR puts him 11th among all position players, higher than Joey Votto and Joe Mauer. In a previous Q&A with Athletics Nation, I asked about the Donaldson's breakout season, and Alan Torres pointed out the following.

ESPN Stats and Info also wrote a great article that showed on which plate zones Donaldson gets his hits. As you can see, he's deadly anywhere in the zone horizontally.

Also, I believe not being a catcher (combined with now being comfortable at 3B), has allowed him to concentrate on hitting. To me, his swing can get loopy when he's being too aggressive, but so far that's worked out well for him anyway.

Finally, I'd say he's always been somewhat of a late bloomer. He was drafted at 22, worked his way slowly through the Cubs and A's system, and really figured out AAA by age 26 last year. Combine that with bringing him out from behind the plate, and that confluence of events has made him an outside MVP contender.

While Donaldon doesn't have a shot at MVP thanks to Chris Davis and Miguel Cabrera doing absolutely superhuman things, he's still having a remarkable season. He's been far more pedestrian since the All-Star break (.329 wOBA), but the total contribution is among the game's best this season.

I also asked about the struggles of Josh Reddick, who had a .188/.286/.293 line on June 14th. Reddick has gone .240/.316/.444 since that point, and while he's a shell of what he accomplished in 2012, there's been at least some signs of life. Reddick remains a plus plus defender in right field with a strong arm, and despite his injuries and struggles, he's still been worth 2 fWAR. 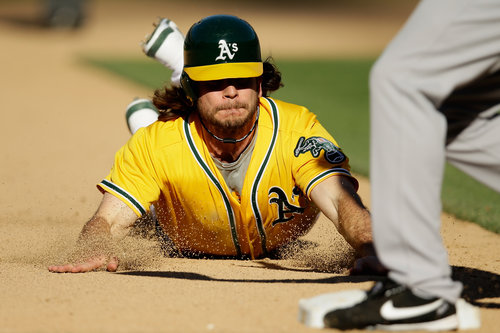 Time for another batch of questions, this time with our friends at Athletics Nation.

Oakland's bullpen has 26 year old Sean Doolitle, who I've found one of the most interesting relievers in baseball over the past few seasons. In 2012, Doolittle threw 86% fastballs, and his strikeout rates and overall effectiveness were terrific. His effectiveness was down a bit when I asked Alan about his progression, and while it's still down, he's remained a good reliever. His strikeouts are down, and so are his peripherals, but he's managed to keep his ERA about the same as it was the year before.

His heater heavy approach hasn't changed, as Doolittle is actually throwing 88% fastballs this season, even more than the year before. When I asked Alan about his arsenal, here's what he said:

Further developing those offspeed pitches will be key to him remaining an elite reliever. That said, his fastball does have significant velocity and even if those don't pan out, it seems he could be reasonably effective as a fastball only guy.

Whatever breaking pitch he throws, Pitch F/X doesn't quite know how to handle it. Brooks Baseball says he throws a slider and a curve, both infrequently. BIS registers it as a curve last year and a slider this year. Whatever it is, he throws it primarily as a change of pace pitch. Here's how he uses everything, courtesy of Brooks Baseball.

The pitch usage against RHH is hysterical. I'm not sure I've ever seen anything quite like that, outside of Mariano Rivera. Here it is - hit it. The curve/slider/whatever is used occasionally as a put-away or waste pitch against lefties, but he still loves the heat. There's something so pure about Sean Doolittle. No mystery, no suspense. Just hit it, I dare you. It's the same reason I've always loved Grant Balfour.