The squeeze play: How to feel about it

The sacrifice bunt series marches inexorably on with part six, this time looking at how the squeeze play has fared over the years.

Share All sharing options for: The squeeze play: How to feel about it

There are few plays more exciting, more surprising, more audacious than the squeeze bunt. Swinging away and hitting extra-base hits is a demonstration of talent, and talent is nice. But the squeeze play is an imposition of will, a punch in a team's gut after telling them you intend to punch them in the gut.

Mariners fans saw a perfect example of this in Game 3 of the 2000 NLDS. The game is tied in the bottom of hte ninth; Rickey Henderson stands on third, and the tuberculosis-potentially-incubating Carlos Guillen is at the plate. Pinella calls for the bunt, but Guillen sees the infield well in on the grass, crowding him like the skinny kid on a Little League team. He swings away at the first pitch, fouls it off, sees Pinella's face in the dugout. The next pitch he squares on and drags it toward Frank Thomas, maybe stepping a little on the plate in the process, and leaps it into the air as the ball finds its way under the first baseman. Henderson scores. Dave can't believe it. It's only the second walkoff bunt in the playoffs in the past forty years.

So how has the squeeze play been working out the past forty years? About as well as you'd expect. 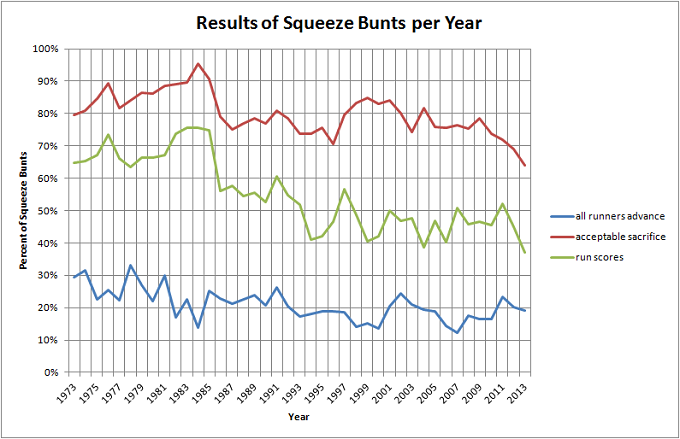 This graph encapsulates all bunts laid down with at least a runner on third and less than two outs. Keep in mind that for this post, I can make no distinction between suicide squeezes and safety squeezes, though the growing disparity between "acceptable" sacrifices and run-scoring sacrifices would lead me to believe that a greater number of trailing runners are being moved up on a bunt, signifying an aborted safety squeeze.

Run-scoring on squeeze plays is at a modern low, nearly half the rate from its peak in the mid-eighties. The cause appears to be very similar to the decline in overall sacrifice bunts: a drop in the acceptable rate of sacrifices, fed by a growing strikeout rate and an increase in the number of force outs. Acceptable bunt ratio and squeeze run ratio correlate at an r-squared of 0.545, meaning that it's likely (although hardly certain) that the two factors are significantly connected to each other.

Sometimes, the numbers work against you. I don't know how many times I've written up an explanation for a chapter, even in this series, only to be reminded to look for one more detail that messes everything up. Yes, the acceptable ratio has been trending downward for all sacrifice bunts. But the biggest change we've seen in bunting, beyond that, is the increase in pitcher bunting over time. Surely that wouldn't have anything to do with it, right? Managers would never be so stupid as to try the squeeze with their worst hitters, in the most obvious bunt situations. 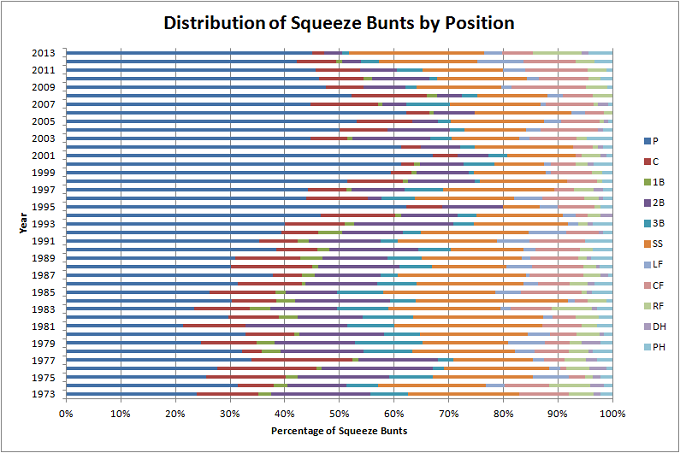 I mean, to hell with this graph. Not only are pitchers performing twice as many of the squeeze bunts in 2013 than they were in 1973, we're not even seeing a corresponding rise in pinch-hit bunting, which is weird but at least makes sense in these crucial situation. So now we have to dig deeper: is the squeeze bunt actually failing, or is it just those stupid pitchers with their stupid required plate appearances ruining everything?

I split the data into pitcher and position-player segments, and this time added a new category to go with successful and acceptable bunts. Named "disastrous bunts", this percentage sums all sacrifices where the game state is worse than even just adding an extra out. In other words, it sums the forceouts and double/triple plays: those situations where it would be even worse than just sending the player up there without a bat. The results are surprising. 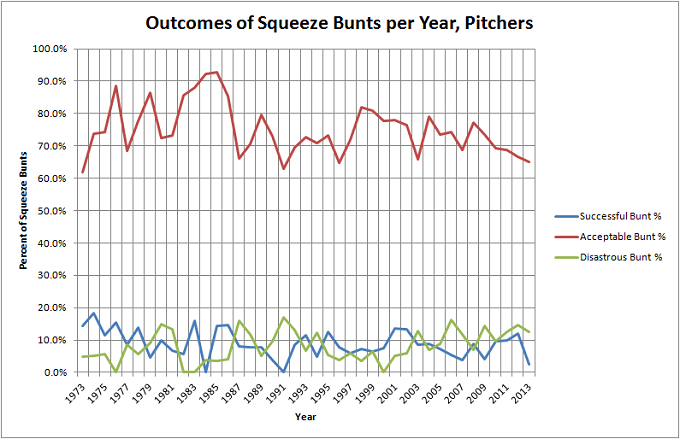 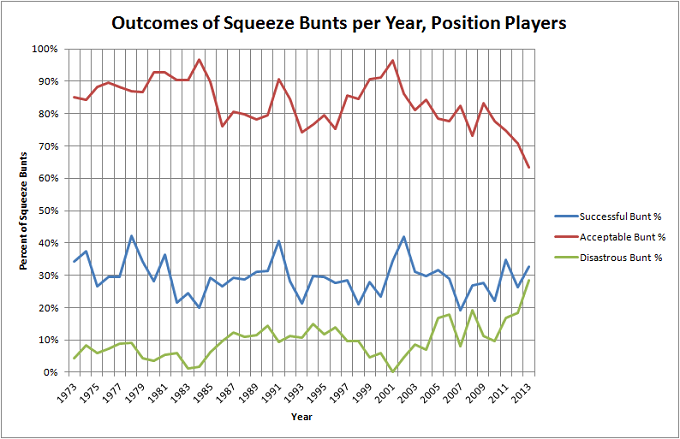 The acceptable rate of pitchers in squeeze situations is exactly in line with their performance in all bunts, whereas position players have dropped to a full 20% lower than their overall rates. Meanwhile, ignoring the messiness around 2001 (where, as I mentioned before, I'm skeptical of B-R's data), and the rate of disastrous bunts is rising steadily over time, though the effect is more pronounced among position players. Perhaps most dramatic of all is the recent spike in squeeze plays throughout baseball. 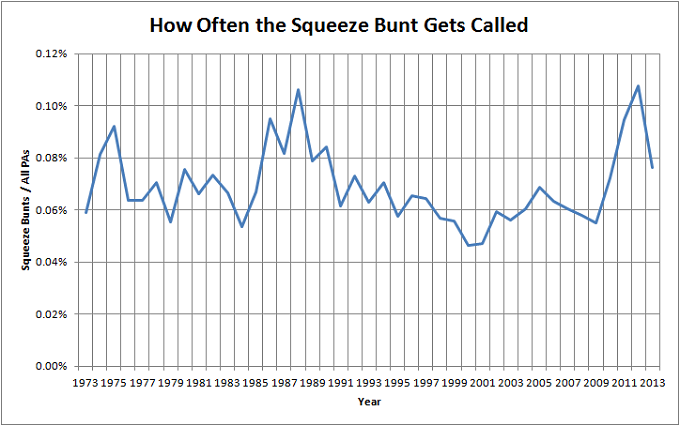 Compare this graph with the first one. Every time we see a spike in squeeze bunt usage, we see a corresponding fall in its success rates as defenses catch on. When offenses become too predictable, defense gets the upper hand, just as the opposite. We're in the midst of one of those readjustments right now: managers are over-relying on the squeeze bunt, ignoring their optimal rate of mixed strategies. Pitchers aren't doing worse because the infield is already expecting it with them, but with position players, the element of surprise so necessary for the bunt is gone.

Sometimes the aesthetics of an act in baseball fails to correspond with its value toward winning games. And this is a shame: the game is better off, more enjoyable, if its most beautiful facets are also its most useful ones. But what we're seeing is that managers have fallen in love with the beauty of the squeeze, and in so doing they've begun to ruin it. It's like hearing a good joke too many times.